Call to renew fight against CAA in Assam 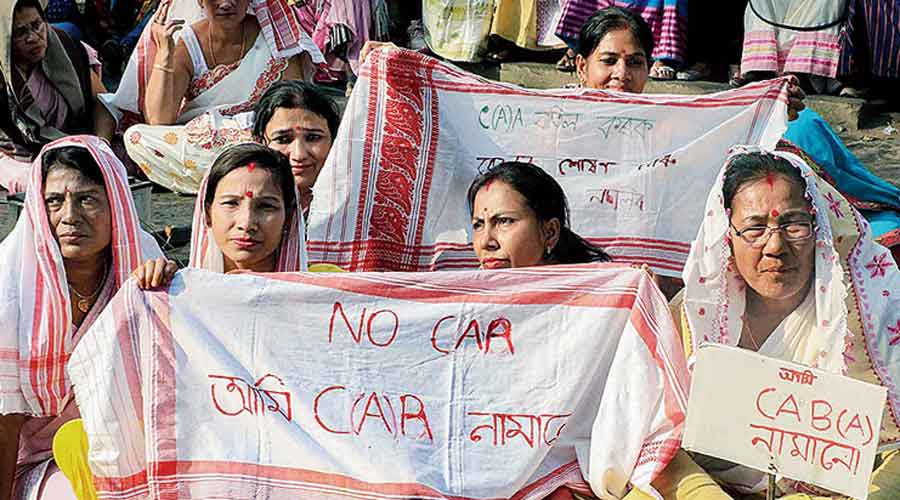 Most in Assam are opposed to the CAA because it provides for Indian citizenship to non-Muslims from Bangladesh, Pakistan and Afghanistan entering India till December 2014
File picture
Umanand Jaiswal   |   Guwahati   |   Published 30.11.20, 01:15 AM

An anti-CAA forum of political parties and organisations in Assam on Sunday called for a united fight against the contentious Citizenship Amendment Act.

The move appears aimed at galvanising anti-CAA forces to pile pressure on the BJP-led government to get the new law revoked before next year’s Assembly elections.

The Coordination Committee Against Citizenship Amendment Act (CCACAC) will issue a public appeal for a united fight on December 12, the first anniversary of the enactment of the CAA that the organisation will observe as Sankalpa Diwas (Pledge Day).

Most in Assam are opposed to the CAA because it provides for Indian citizenship to non-Muslims from Bangladesh, Pakistan and Afghanistan entering India till December 2014. They see it as a threat to Assam’s identity and culture and have held sustained protests that subsided because of the pandemic.

“We have decided to observe the first anti-CAA anniversary on December 12. We will not only be renewing our pledge to continue our fight against the unconstitutional law but will also appeal to all anti-CAA forces to put up a united fight against the law,” CCACAC chief coordinator Deben Tamuly told The Telegraph.

A highlight of the movement will be the felicitation of the six persons who died in the crackdown against anti-CAA protesters last year.

“We will invite the families of the victims and felicitate them so people don’t forget their sacrifice. We will be renewing our pledge to continue the fight that we started in 2016 to uphold the secular character of our Constitution and we will also seek a thorough probe into the deaths of the six persons during the anti-CAA movement,” Tamuly said.