Angling in Deepor banned till Jan 31

Guwahati police have prohibited community fishing in Deepor Beel wildlife sanctuary from Sunday till January 31 under Section 144 of the CrPC. 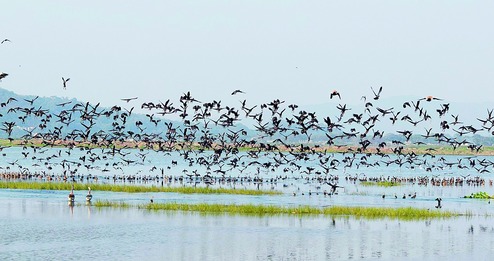 Guwahati: Guwahati police have prohibited community fishing in Deepor Beel wildlife sanctuary from Sunday till January 31 under Section 144 of the CrPC.

The order, issued by deputy commissioner of police (West district) Mridulananda Sarma says there is information from divisional forest officer, Guwahati wildlife division, that some people from villages around the wildlife sanctuary, such as Keotpara, Mikirpara and Azara, in tandem with people from various fringes of the city, are likely to organise community fishing on Sunday and after that.

"Such a venture is absolutely illegal under the Wildlife (Protection) Act, which will also cause irreparable as well as irretrievable damage to the ecosystem of the sanctuary," the order says.

It says it is absolutely necessary to take preventive measures to protect wildlife and ecosystem of the sanctuary. Public assembly of five or more persons in and around the wildlife sanctuary has been prohibited under Section 144 of the CrPC for community fishing. The order says any person aggrieved by this order can file an objection, for cancellation/ modification of the order.

The order, however, exempts executive magistrate, forest officials and police personnel on duty.

Conservationists have been calling for a complete ban on picnics in and around the wildlife sanctuary as it is common to see picnickers gather around the sancturay during Magh Bihu and throw garbage all around.

"It is also an important place for migratory birds and any disturbance affects their movement," a wildlife activist said. He hopes that the authorities would implement the order with utmost seriousness and taht it would not be flouted. This is not the first time that such an order has been issued to preserve the wildlife sanctuary.

The place is as an important area for avians.

The final notification of Deepor Beel as a wildlife sanctuary was given in 2009.