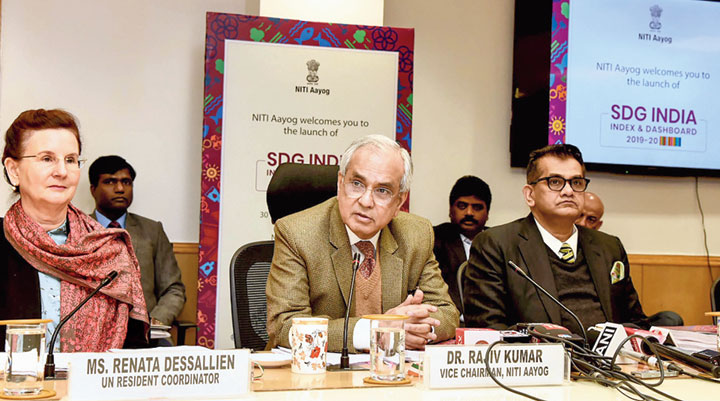 All the northeastern states have been ranked as “performers” in the second edition of the Sustainable Development Goals (SDG) India Index, but most of them have fallen behind the all-India score.

The index, which comprehensively documents the progress made by states and Union Territories towards achieving the 2030 SDG targets, was released on Monday by Niti Aayog.

The SDG India Index has been developed in collaboration with the ministry of statistics and programme implementation (MoSPI), United Nations in India, and Global Green Growth Institute.

The maximum gains have been made in goals 6 (clean water and sanitation), 9 (industry, innovation, and infrastructure) and 7 (affordable and clean energy).

While Manipur’s SDG index score is 60 and is ranked 13th, the score of Tripura, Nagaland, Mizoram and Assam are 58, 57, 56, and 55, respectively. Meghalaya is ranked 25th with a score of 54 while Arunachal Pradesh is one score behind at 26th.

The SDG India Index 2019 tracks progress of all states and Union Territories on 100 indicators.

The goals represent the aspirations of the global community and also a valiant effort to push the frontiers of development, the document released by Niti Aayog stated.

“It is now universally acknowledged that the SDGs represent an elaborate agenda for the governments, that necessitates achieving progress simultaneously across social, economic and environmental pillars,” it added.