Advertisement
Home / North-east / Aftermath of a tragedy on silver screen

Aftermath of a tragedy on silver screen 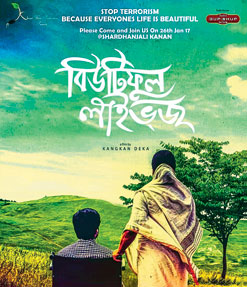 Guwahati, Feb. 17: Two extremes of the spectrum, a portrayal of the people who died in the October 30, 2008, blasts and that of Assamese cinema's first lip-lock, are depicted in Beautiful Lives, a film released today amid a fair amount of controversy.

Director Kangkan Deka portrayed the life of a bomb blast victim in his debut film, Beautiful Lives, which had faced legal problems before its release. The Assamese film released today in 45 theatres across the state.

A premiere was held today at Gold Cinema, Paltan Bazar, where many film critics and film buffs turned up. The film was highly appreciated . The film got an A certificate from the Censor Board because of many bold scenes and is about the life of a 28-year-old man, Ajoy, who loses his hands and a leg in the 2008 blasts. The conflict between the mind and body is then portrayed through his attempting to handle his normal sexual urges.

The kissing scene that has generated the controversy is part of the throwback to the days when he was well and able.

Actor Juri Dutta plays the role of Ajoy's girlfriend and features in the kissing scene. She has gone to court saying that she had agreed to the scene after being told that the film would not be released in theatres and would be sent as entries to film festivals only.

In a conversation with The Telegraph, the director of the film said, "Many stories are left behind in the congestion of politics. In this film I want to portray a story which was also left behind. The storyline is fictional but the situation is real. The bomb blast destroyed the dreams of many people. But no one got justice."

"I went for a session with Navanil Barua, a neurosurgeon, where he told me all about the psychological condition of the blast victims. Such people become physically disabled but their mind keeps working. I also did some study on the Internet. It is so challenging. But I managed," said Boloram Das, who plays the lead role.

"After the bomb blast on October 30, many went into trauma, some became unable to speak for many days. Some women who lost their husbands in the blasts were forced to take to prostitution for a livelihood. We still see them in many places," said Monomati Barman, the director, Global Organisation for Life Development.

This non-governmental organisation offers psychological support to the victims.

"For the women who had taken to prostitution, we arranged skill training to help them get jobs," Barman said.

The story of the blast, its aftermath, and the human tragedy that scarred Assam for ever, is now on screen.