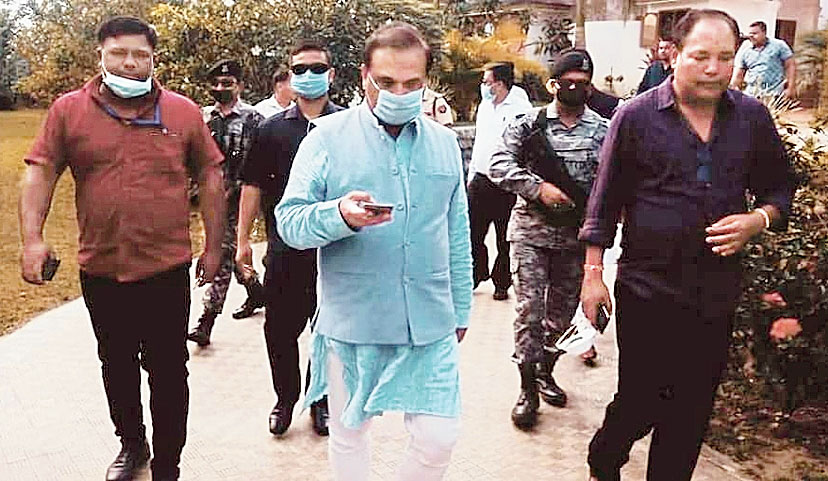 Assam feared community transmission of coronavirus with four more persons from Bongaigaon district, with no travel history or connection to Tablighi Jamaat, testing positive for Covid-19 on Thursday. One person from Karimganj, a secondary contact of a Nizamuddin Markaz attendee, also tested positive late in the evening.

The five fresh cases in a single day took the state’s Covid count to 42. With 29 discharged and one dead, Assam had 12 active cases. (Earlier report inside)

Though the government has so far denied any possibility of “community transmission”, it admitted that the situation was very critical.

It was only on Tuesday that Bongaigaon in lower Assam had joined the list of Covid-19 affected districts in the state with a young girl, a secondary contact of a Nizamuddin returnee, testing positive. With the detection of the fresh cases, Bongaigaon now has five active patients and has been declared a “hotspot” or “red zone” district.

Health minister Himanta Biswa Sarma, who visited Bongaigaon, said, “We still can’t say whether these are cases of community transmission but since none of them have any travel history, we are concerned. It’s the first instance where we found that people with no travel and contact history tested positive in Assam. Questioning of the patients will clear their contacts and other details but the people from Bongaigaon must maintain strict adherence to the preventive norms.”

Of these four, two are connected with healthcare, one is a vegetable vendor and the other is a housewife. None of them has a common connection and are located at varied distances too.

The district administration has already sealed the public healthcare centre (PHC) where two of the infected persons were working. A massive sample test has been planned from Friday. All of them were sent to the city for treatment. The health department has started the process of tracing their contacts and travel history to pinpoint the source of the infection.

Six persons from Sorbhog in Barpeta district, who came in contact with a positive patient of Bongaigaon when the latter visited there, were quarantined at Fakhruddin Ali Ahmed Medical College and Hospital on Thursday.

Sarma said all the four in Bongaigaon who tested positive had approached hospitals after developing minor fever-like symptoms. Their samples had been sent for testing at Barpeta Medical College and Hospital.

However, not all was gloomy on Thursday. Two districts, Nalbari and Golaghat, transited from red zone (hotspot) to green zone (non-hotspot) with no fresh case recorded in the past 28 days, as per the Union health ministry’s guidelines.

Nalbari deputy commissioner Bharat Bhushan Dev Choudhury said though the district had entered the green zone, the lockdown would continue in accordance with rules.

Sarma said, “Declaring as a green zone today does not mean that the district will remain in that zone in the upcoming days unless the public observes the lockdown norms.”

In Hailakandi, 30 persons, including two children, who were quarantined in facilities in Cachar district of south Assam have been released on Thursday.