The suspects were produced in court on Tuesday evening 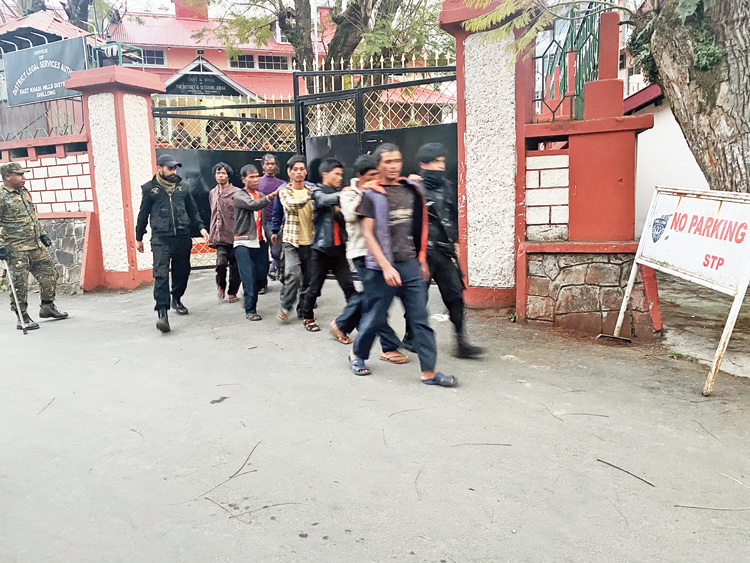 Meghalaya police have arrested 25 people suspected to be involved in a lynching incident which claimed the life of a youth.

On Sunday evening, a group of nine youths were attacked by a mob in Mawkynrew block of East Khasi Hills while they were returning from a picnic at Syntung village, nearly 50km from here. The youths were accused of being “menshohnoh” (cutthroats).

Six of the youths managed to flee to a nearby jungle, but two were injured and the third died of his injuries.

The youths were returning from Syntung village. At Pashang village, the vehicle was stopped and one boy pulled out by the mob. But the villagers intervened and sent the youths on their way.

However, one of them was guarded by the villagers.

However, the vehicle hit some children while trying to escape the mob at Pashang. This infuriated the mob, and the vehicle was again stopped at Lad Mawlang village, about 5km from Pashang. At Lad Mawlang, the assault started again. On Monday, a police contingent was sent to the area to arrest the culprits.

Assistant inspector-general of police Gabriel K. Ïangrai said on Tuesday that the police initially arrested 27 suspects. However, a juvenile and a senior citizen were released.

The suspects were produced in court on Tuesday evening. While four of them were sent to police remand for three days, the rest are in judicial custody.

Ïangrai said on Sunday, around 8pm, information was received that a Khasi boy was assaulted by some unknown person(s) at Pashang area of Mawkynrew. A police team was immediately sent.

It was learnt that the nine youths had gone to Syntung for a picnic and on their way back they were waylaid by villagers near Pashang and assaulted. While three were grievously injured, six of them managed to flee to a nearby jungle. Police managed to rescue the injured as well as the six youths on Monday morning. However, one of the injured, Macmillan Kharshandy, 24, succumbed to his injuries before reaching Shillong civil hospital. His mortal remains were laid to rest on Tuesday.

“A case has been registered under relevant sections of the law and all efforts are being made to nab the other culprits involved in this heinous crime. Public are requested not to spread rumours regarding the incident,” Ïangrai said.

The chief of Raid Lynshing, which covers 24 villages including Syntung, Pashang, and Lad Mawlang, Wanslempor S. Lynshing, narrated the incident to the media on Tuesday. The youths had mistakenly taken the road from Syntung to Mawsna village instead of taking the one to Shillong. Lynshing said upon reaching Mawsna, the youths enquired from a child about the road leading to Shillong, and it was from here that the suspicion of them being cutthroats first developed.

“From Mawsna, phone calls were made to nearby villages asking the villagers to stop the vehicle in which the youths were travelling. Upon reaching Pashang, they were stopped. But after sometime, a mob from neighbouring villages arrived,” Lynshing said.

He said at Lad Mawlang, they were assaulted by the mob and the vehicle was also vandalised.

“Elders from Syntung village went to Pashang and Lad Mawlang to pacify the mob. We told the mob that they were not menshohnoh, but were returning from a picnic. But we were unable to stop them,” chief of Syntung village Robert Pale said.