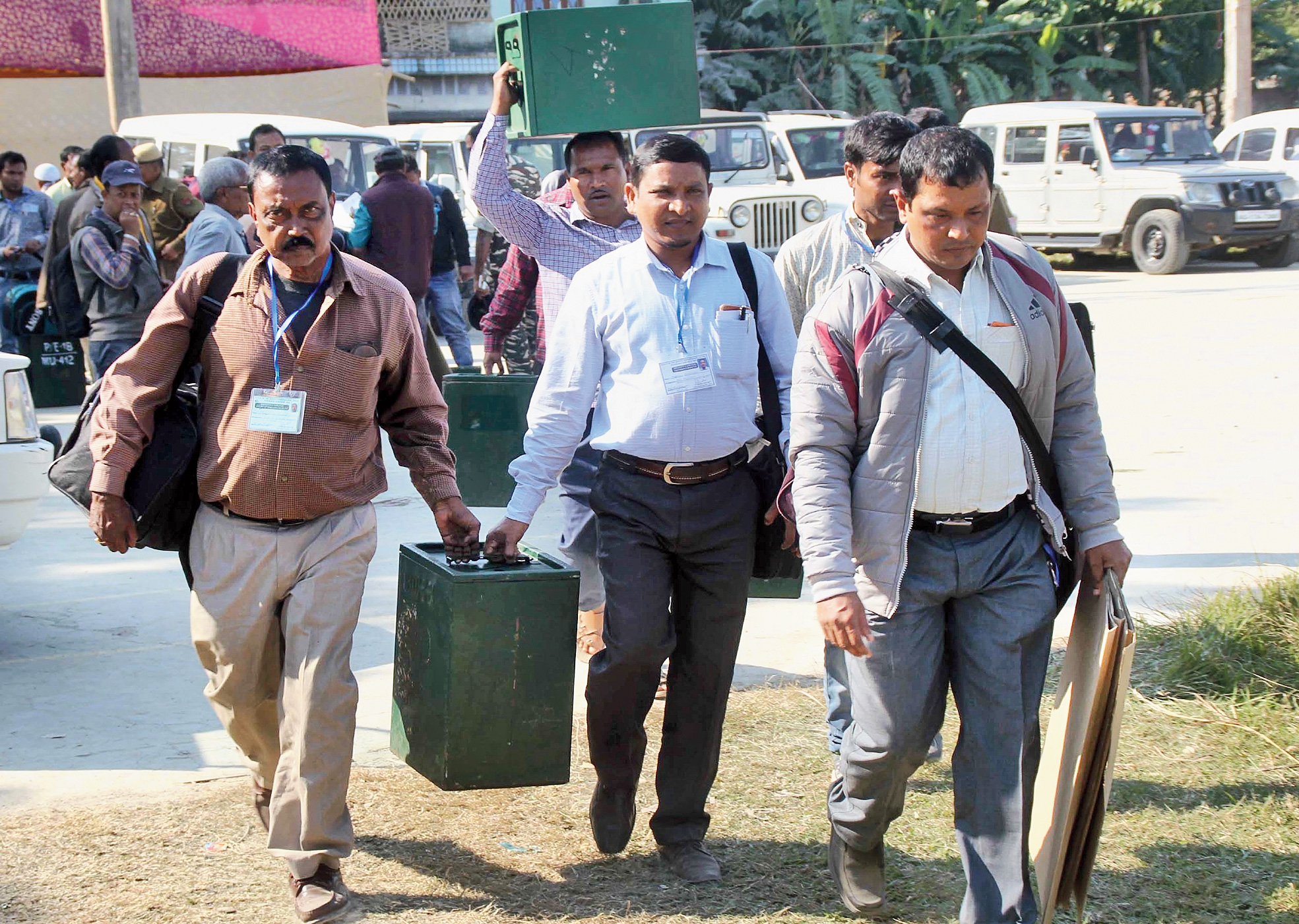 Polling officials carry election materials as they leave for booths in Dhubri on Saturday, the eve of the second phase of panchayat polls.
UB Photos
Our Special Correspondent   |   Guwahati   |   Published 08.12.18, 06:32 PM

Over 64 lakh voters will decide the fate of 35,056 candidates in the second phase of panchayat elections in Assam on Sunday.

“Going by our past experience and voting pattern in these districts, we expect the polling percentage to exceed that of the first phase,” state election commissioner H.N. Bora said.

The first phase of polling in 16 districts on Wednesday had recorded a voter turnout of over 80 per cent.

Bora said they were “well prepared” for the second phase of polling.

“There were some incidents of mismatch of names of the candidates and their election symbols in the ballot papers in the first phase and due care has been taken to avoid it in the second phase,” he said.

He said the officials were using boats to reach polling stations located in sar (riverine) areas.

“We had faced shortage of vehicles in Barpeta, Nalbari, Dhubri districts in lower Assam and Cachar, Hailakandi and Karimganj in Barak Valley. For the lower Assam districts, we have sent vehicles from Guwahati and for the Barak Valley districts, vehicles were requisitioned from Tripura,” he said.

A delegation of AGP leaders met the state election commissioner on Saturday and submitted a memorandum.

The delegation, comprising general secretaries Birendra Prasad Baishya and Kamala Kanta Kalita, and spokesperson Manoj Saikia, sought installation of CCTV cameras in all counting centres so that counting of votes can be done under surveillance to avoid any untoward incident.

The AGP urged the state election commissioner to ensure that no person other than the designated officials and the counting agents of the candidates can enter the counting centres.

They also asked the commissioner to ensure that the district administration and the officials engaged in counting of votes maintain impartiality.

Counting of votes will take place on December 12.

The AGP demanded that the victorious candidates should be issued the winner’s certificate immediately after declaration of the results.