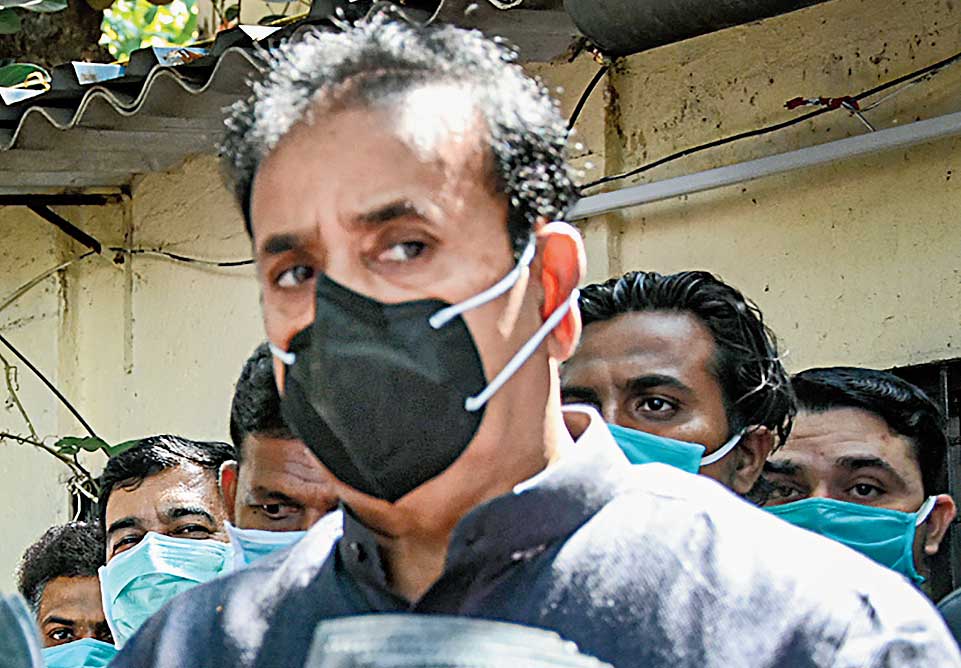 "Because of the mistake of a senior official of ours, the Wadhawan family was granted permission to travel to Mahabaleshwar during the lockdown period. The quarantine period of the Wadhawan family ends at 2pm today," state home minister Anil Deshmukh said without naming any official.
(PTI)
PTI   |   Mumbai   |   Published 22.04.20, 07:08 AM

Maharashtra home minister Anil Deshmukh on Wednesday said the state government has requested the CBI to take the custody of DHFL promoters Wadhawans, who allegedly violated the lockdown norms and travelled to Mahabaleshwar earlier this month.

DHFL promoters Kapil Wadhawan and Dheeraj Wadhawan, and 21 others, including their family members, were placed under institutional quarantine after they reached Mahabaleshwar hill town earlier this month during the lockdown period.

In his Facebook address, Deshmukh said he has requested the Central Bureau of Investigation (CBI) to take the custody of Wadhawan brothers after their quarantine period ends at 2pm on Wednesday.

The two brothers are named as accused in the CBI's FIR pertaining to the alleged swindling of money by Yes Bank promoter Rana Kapoor and others.

Both the brothers were absconding since the case was registered against them on March 7, prompting the CBI to get non-bailable warrants against them from a special court.

'Because of the mistake of a senior official of ours, the Wadhawan family was granted permission to travel to Mahabaleshwar during the lockdown period. The quarantine period of the Wadhawan family ends at 2pm today,' Deshmukh said without naming any official.

'Hence, we wrote a letter to the ED director and CBI on Tuesday that you should take their custody after the quarantine period ends today,'  Deshmukh said.

'The Wadhawan family will remain in our custody till the CBI does not take their custody, the minister said.

Amitabh Gupta, the special principal secretary in the home department, had allegedly given the travel permission to the Wadhawans.

After the incident led to a controversy, Gupta was sent on a compulsory leave.

Without naming fugitive diamond businessmen Nirav Modi and liquor baron Vijay Mallya, Deshmukh said some people fled to London in the recent past, but the Maharashtra government will not let the Wadhawans do that.

'They are in our custody and we will hand them over to the CBI for further action, Deshmukh said.

On April 17, Satara superintendent of police Tejaswi Satpute informed the Enforcement Directorate (ED) and CBI about the quarantine period of Wadhawans ending on Wednesday, and requested the agencies to make logistical arrangements to take their custody.

In her letter to the agencies, Satpute assured that police will provide all necessary assistance in the process.

The Wadhawan brothers and their other family members were kept in institutional quarantine in Mahabaleshwar on April 9 after they travelled there from Khandala in Pune.

As both the brothers are accused in cases being probed by the ED and CBI, officials of the two agencies reached Mahabaleshwar the next day.

The family was sent to institutional quarantine facility at St. Xaviers High School.

An offence was registered against all of them under IPC Sections 188 (disobedience to order duly promulgated by public servant), 269, 270 (negligent act likely to spread infection of disease dangerous to life), 34 (common intention) and provisions of the Disaster Management Act.

Kapil Wadhawan, the 46-year-old chairman and managing director of Dewan Housing Finance Limited (DHFL), was arrested on January 27 this year by the Enforcement Directorate for his dubious dealings with gangster Iqbal, who died in 2013, and was booked under provisions of Prevention of Money Laundering Act (PMLA).

He was granted bail on February 21 by a special PMLA court in Mumbai.