Advertisement
Home / Jharkhand / Research to cushion effect of mine digging

Research to cushion effect of mine digging

The team of a PhD student of mining engineering department, Anurag Agarwal of Chhattisgarh, carried out the research 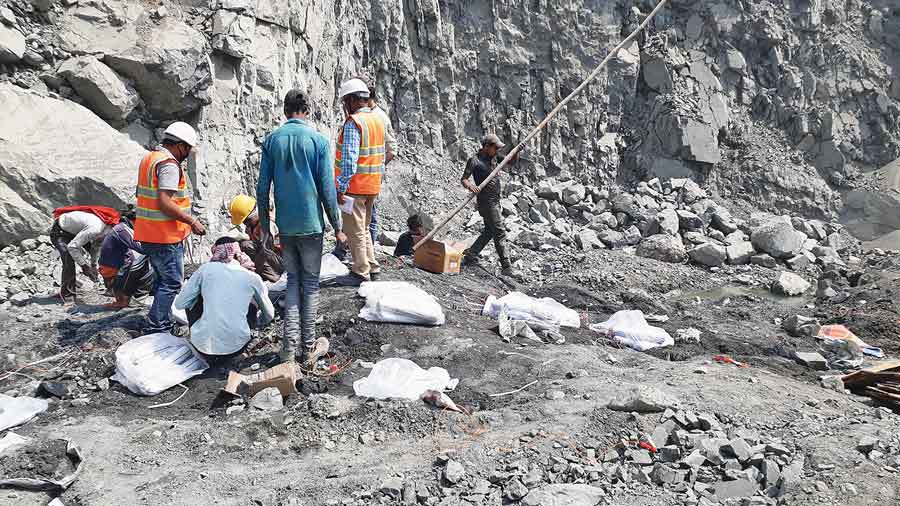 The IIT (ISM) mining engineering research team during a site survey of a dolomite mine at Gaya in Bihar.
Picture arranged by Shabbir Hussain
Animesh Bisoee   |   Jamshedpur   |   Published 26.05.22, 01:57 AM

Jharkhand-based central government owned tech-cradle IIT (ISM) in Dhanbad has undertaken a research to minimise the adverse effects of blasting carried out in mines for excavation.

“During the lockdown, when the world was dealing with the devastating effects of the Covid pandemic, a team of mining engineering department of our institution conducted a study to find ways of minimising the various effects of blasting in mines, such as house collapse and habitat discomfort, caused by ground vibration,” said a release issued by dean (media and branding) IIT (ISM) Rajni Singh on Tuesday evening.

The team of a PhD student of mining engineering department, Anurag Agarwal (of Chhattisgarh), carried out the research under the guidance of his faculty members including his research guide B.S. Choudhary and senior faculty V.M.S.R Murthy between March 2020 to December 2020 in the coal mines of Jharia, the dolomite stone mines of Gaya in Bihar, and the limestone mines of Rajasthan and proposed a blasting design that can help to reduce blasting-induced environmental issues.

“In his nine-month survey and data analysis, Agarwal found out that the average percentage of explosive energy conversion into seismic energy is higher (6.12 per cent) in dolomite mines than in coal mines (around 3.1 per cent).

“The analysis of blast vibrations, which was also performed with MATLAB (a proprietary multi-paradigm programming language and numeric computing environment developed by MathWorks), revealed that seismic energy dissipated into rock masses has a good correlation with radial distance after using the modified seismic energy prediction equation,” the release stated.

“Explosives used in mines are primarily aimed at fragmentation of rocks for mineral excavation, but despite significant technological development in this area, explosive utilisation efficiency has not been increased,” said  Agarwal.

He added that under current blasting practices, only less than 30 per cent of explosive energy is used for breakage and displacement of rock masses in mines, while the remainder is wasted in unwanted effects such as ground vibration, fly rock or air overpressure, noise light etc. Such unintended consequences of blasting frequently result in the relocation of people from mining areas, and sometimes law and order issues arise as a result of protests by blast victims.

“After conducting extensive research on mine blasting it was found that seismic energy prediction in bench blasting is the key for its optimisation, so our study was conducted to predict the mine blast induced seismic energy, which was analysed using Peak Particle Velocity (PPV),” concluded Agarwal.