Ration card arrives too late for villager in Jharkhand

Unemployed man's card reaches him, but after his demise 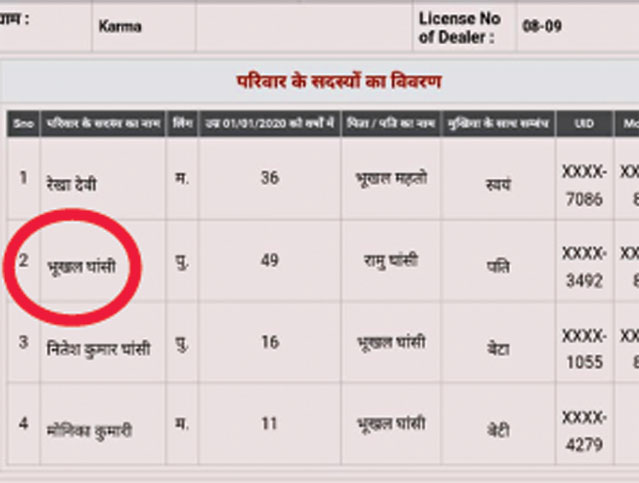 A screenshot of the government website showing the ration card with deceased Bhukhal Ghasi’s (circled in red) name on it.
The Telegraph
Achintya Ganguly   |   Ranchi   |   Published 17.03.20, 07:59 PM

Bhukhal Ghasi, an unemployed villager of Bokaro district had no ration card when he died, allegedly of starvation. Now the ration card that has been issued after his death entitles him to ration, posthumously.

That was what a fact-finding team of the Jharkhand wing of the Right to Food Campaign found in Bhukhal’s village, Karma Shankardih under Singhpur panchayat of Kasmar block of Bokaro district, on Friday.

“They have been given a computer generated copy of the card on March 12 with Bhukhal’s name in it,” said Asharfi Nand Prasad, convener of the state’s Right to Food Campaign, who was a member of the team along with activists Balram and Afzal Anees.

Besides Bhukhal’s, the card now has the names of his wife Rekha Devi, their son Nitesh Kumar Ghashi, and a daughter, Monika Kumari. But it still leaves out another daughter Rakhi, another son Gujara and also Gujara's wife Rita and son Hritik, Prasad said.

After the death of Bhukhal, 42, on March 6, food activists alleged he had died of starvation as the family that had no ration card didn’t cook any food for four days. Bhukhal was working as a mason’s helper in Bangalore, but returned in August 2019. He could not find any job near home and lived in abject poverty.

“Now an Antyodaya card has been issued with four names in it, including Bhukhal’s,” Prasad said.

“We also checked the government website and found the slip to be identical to the one given to Bhukhal’s family,” Prasad added.

Bhukhal’s family got the computer generated copy of the ration card as did 14 other families that had also applied for the card in August last year and the cards have been issued now, Prasad explained when asked how the card had Bhukhal’s name after his death.

“Actually, some villagers applied for the card and also got the application of Bhukhal submitted that time,” Prasad said.