Killer trio back in Chakulia 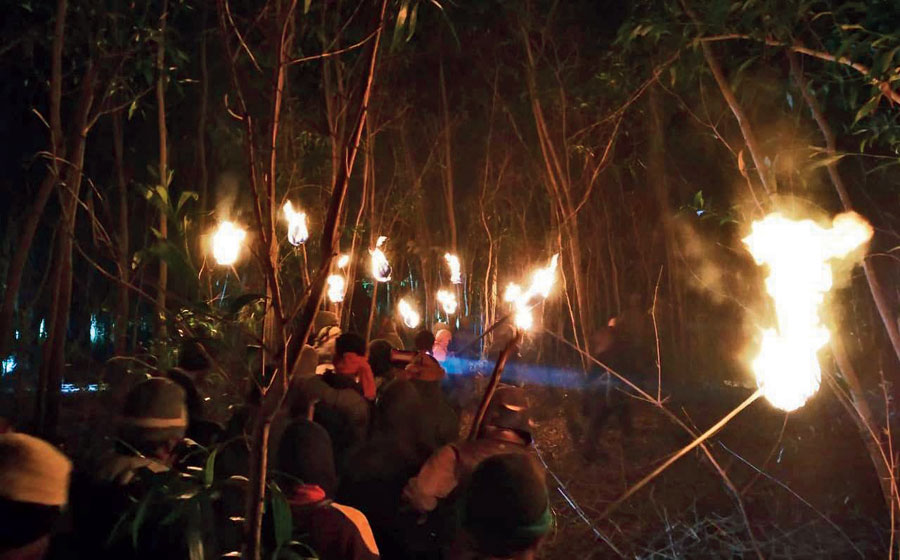 Efforts to drive away the three elephants that had killed three persons in Ghatshila sub-division’s Chakulia have failed.

A joint team of forest officials and elephant-divers from Jharkhand and Bengal tried to get the herd to move away from Bankati village in Chakulia into the neighbouring Mayurbhanj district of Odisha, but the three jumbos ran into another herd on the way and returned.

The herd, which trampled to death three villagers including a five-year-old girl, is anchored at Devsole jungle — around 5km from Bankati and 70km from Jamshedpur.

Jamshedpur divisional forest officer (DFO) Abhishek Kumar said they had requested their Bengal counterparts for help in driving the herd away to a new destination.

“The forest department officials from Bengal reciprocated our request and arrived here with a team of 60 elephant-drivers. As the Dalma-Ghatshila-Chakulia-Jhargram stretch is part of the elephant corridor the herd in question must be accustomed to, we decided to drive it somewhere in a jungle in Mayurbhanj district of Odisha. Accordingly, we started the operation on Saturday night and had driven it about 25km away,” said the DFO.

“It has become aggressive and is not responding to the elephant-drivers’ attempts. The herd chased the team of elephant-drivers and the forest department officials from Bengal abandoned the task of driving away the herd last (Sunday) night,” Kumar said.

The forest department now has to take extra care to ensure that the herd does not stray into the villages at night.

“We have distributed sufficient number of crackers and mashals (flame torches) to the people living in the villages surrounding Devsole jungle, which is close to the Bengal border,” said Kumar.