Jharkhand millennial voters have no FOMO 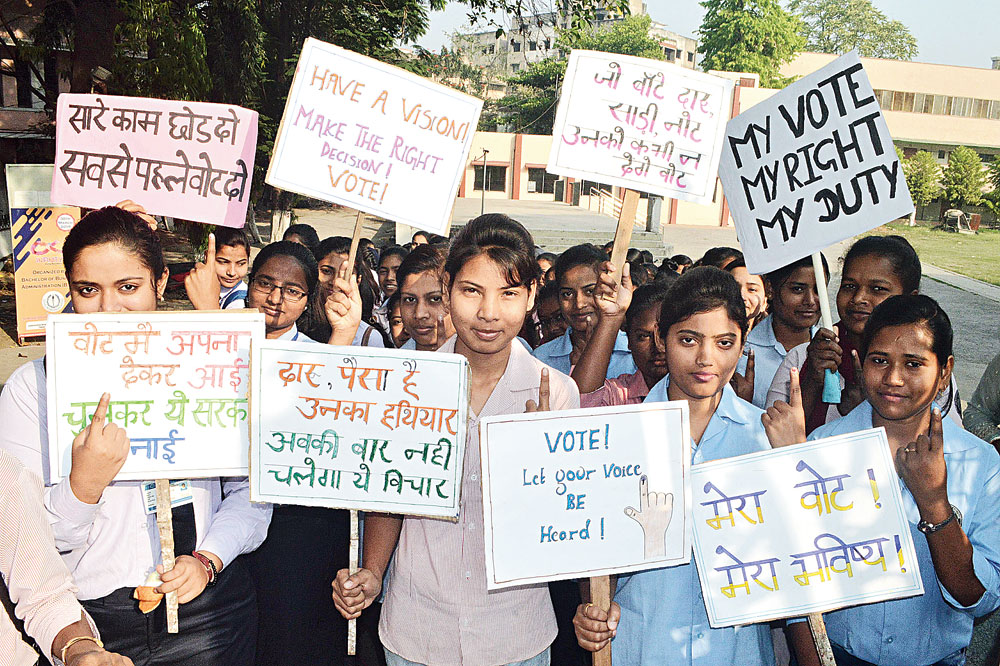 The first voter’s ink on the finger is special. And to help out the first-time voter — the millennial Indian — reach the polling booth and cast his or her franchise, political parties are pulling out all stops.

From helping first-timers with voter IDs to wooing them on social media, political parties are bonding with youngsters on a physical, emotional and digital level like never before.

Reason: the number of first-time voters is 2.20 lakh in Jharkhand. And though an affluent Plus Two student in say, Ranchi or Jamshedpur, has little in common with a landless teen farmhand in, say, Simdega, youthful optimism — the hope for a brighter future — binds all young voters.

“What we will make sure is to host campaigns and meetings to make first-time voters know our poll manifesto. We will also organise meetings of candidates with first-time voters for a direct connect with young minds,” Shahdeo said.

This apart, the Congress will bank on positive social media posts, he said. “This is a wired generation. So talking about our development goals on social media platforms help. We also feel it is our responsibility to show the youth why and how the BJP has failed,” said Shahdeo.

BJP general-secretary Deepak Prakash said their party had been organising programmes for the youth since the past one year. “Our party has chosen to touch an emotional chord by helping first time voters with voter ID cards,” Prakash said. “Emotion always works better than any campaign,” he said. “So our youth wing has helped many first-time voters get voter IDs. BJP calls first-time voters millennium voters and we work hard to connect with them through meetings not just today but over these past one-and-a-half years.”

He added, “We have used different strategies for rural and urban youth because their dreams and aspirations are different. Rural youths might have basic needs, urban youths might dream of working in the IT sector.” BJP also has an extensively NaMo merchandise, starting from tees and caps to mugs for young voters.

“Jharkhand’s youths have a different approach on electing their representative, they care deeply about local issues. We are making them aware about local issues they are directly linked with. Our youth campaign is on WhatsApp, Facebook, Twitter and Facebookwhere we tell them about Hemant Soren’s background and vision. Our party workers to circulate our posts and messages that speak more about Jharkhand and local representatives,” said JMM secretary Sudivya Kumar.