Advertisement
Home / India / Your high-rise is warming the globe

Your high-rise is warming the globe 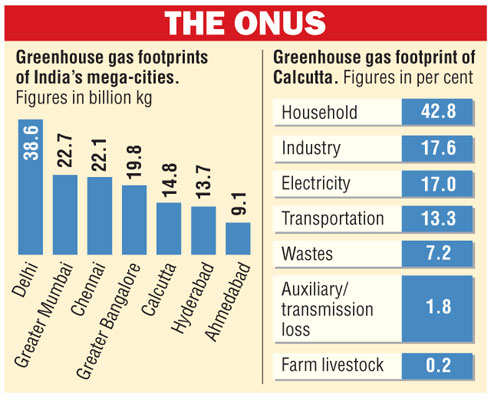 The researchers at the Indian Institute of Science (IISc), Bangalore, have found that urban households account for unexpectedly high proportions of the GHG emissions of cities, with Calcutta's domestic sector at the top, contributing over 42 per cent of the city's GHG footprint. (See chart)

Greenhouse gases such as carbon dioxide, methane and nitrous oxide in the atmosphere absorb heat from the Sun and are contributing to global warming.

The study has identified Delhi as the worst polluting metropolis - it released over 38 billion kg of GHG during 2009, the latest year for which pooled emissions data is available, followed by Greater Mumbai which spewed 22.7 billion kg, and Chennai with 22.1 billion kg.

The researchers say Calcutta's 19 billion kg footprint could be because of a mix of several factors - from lower levels of industrial activities to the greater use of public transport which would lower transport-related emissions.

While GHG emissions have long been linked mainly to transportation, power plants and industrial activities, the researchers found that the GHG emissions from the domestic sector ranged from 17 per cent in Hyderabad to 42 per cent in Calcutta.

"This may seem like a surprise, but not when we take into account the changing architecture of our cities and our mismanagement of cities' solid and liquid wastes," T.V. Ramachandra, a faculty member at the IISc Centre for Ecological Sciences, told The Telegraph.

The study by Ramachandra and his colleagues at the IISc's Centre for Energy and Wetlands Research provides insights into the GHG emissions of cities sector by sector and is expected to help government departments and policymakers identify priority areas for actions to curb emissions.

"High-rise apartments and buildings with glass facades tend to raise electricity consumption," said Bharath Aithal, a post-doctoral research scholar at the IISc and member of the study team. "Elevators, water pumps, apartments sealed off by glass windows - all of this contributes to emissions."

Scientists not associated with the study said it could identify sectors for action but cautioned that a city's GHG footprints should not be viewed in isolation of the economic relevance of the city.

"Cities are hubs of job creation and wealth production," Thiagarajan Jayaraman, professor and dean at the School of Habitat Studies at the Tata Institute of Social Sciences, Mumbai, told this newspaper. "The social and economic relevance of cities should be taken into account while assessing their GHG footprints."

"These may appear small numbers, but methane has a 21-fold stronger greenhouse effect than carbon dioxide," said Ramachandra. "Our cities are still not managing their garbage and sewage the way these wastes should be handled."

Experts estimate that about 60 per cent to 70 per cent of domestic and municipal garbage contains organic matter that ideally needs to be segregated and processed separately for conversion into manure. Instead, most cities dump solid wastes into landfills that become a source of methane. And while all cities have sewage treatment facilities, Ramachandra said, they are not sufficient to manage the volumes of sewage the cities generate.

A climate change specialist in the US said the study could help cities set targets for themselves. "It illustrates sector by sector, opportunities that cities could act on," said Pankaj Bhatia, deputy director of the Climate Program at the World Resources Institute, Washington DC. "Cities could consider using initiatives such as the Clean India Campaign or plans to expand renewable energy to curb their GHG emissions."

"Lower emissions would be a co-benefit of the Clean India Campaign."