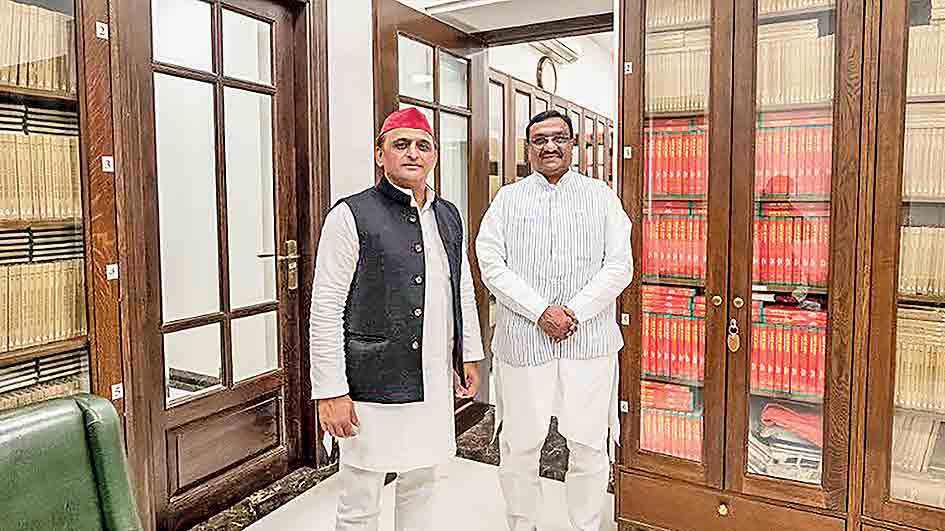 A third OBC minister of the BJP in Uttar Pradesh quit in as many days and met Samajwadi party chief Akhilesh Yadav,  accusing the Yogi Adityanath government of neglecting the backward classes and the Scheduled Caste communities and threatening elected representatives who spoke up for them.

Two MLAs — Mukesh Verma and Bala Prasad Awasthi —  quit the BJP. Nine MLAs, including the three ministers, have rebelled against the party over the past three days and appeared bound for the Samajwadi Party, the principal challenger to the BJP in the February-March elections.

The Samajwadi-RLD combine on Thursday released its  first list of 29 candidates, picking  19 from the RLD and 10 from the Samajwadis.

Saini alleged that the Adityanath government was ignoring the rights of the OBCs and the Scheduled Castes.

“The government has ignored the OBCs, SCs and the unemployed and stripped them of their rights. Many ministers and MLAs have been threatened in the past for raising these issues,” Saini told reporters after sending his resignation to governor Anandiben Patel in the morning.

Later, former chief minister Akhilesh tweeted his picture with Saini and welcomes him “heartily into the Samajwadi Party”.

Verma, the BJP MLA of Shikohabad in Firozabad district who quit the party on Thursday, claimed that the Adityanath government had done more damage to the rights of OBCs and SCs in five years than what had been done by others in 70 years.

Verma, an OBC leader, said: “I met the chief minister many times in the last five years and urged him not to harass the OBCs, SCs and the minorities as it was not good for governance and the country. I also wrote to him many time but he never listened to me or other ministers and MLAs.”

“It is a policy decision of the present state government to deny caste certificates to OBCs and SCs so that they don’t apply for government jobs. The Uttar Pradesh government has inflicted more harm on the OBCs, SCs and minorities in the last five years than what had been done by past governments in 70 years,” he added.

“A large number of BJP ministers and MLAs will resign from the BJP over the next few days,” Verma claimed.

The exits are not restricted to OBCs and SCs. Bala Prasad Awasthi, a Brahmin MLA from Dhaurahara in Lakhimpur Kheri district, sent in his resignation to state BJP chief Swatantra Dev Singh on Thursday afternoon and his supporters made public the contents of the letter.

“The government had ignored the interests of the farmers,” Awasthi, a four-time MLA, alleged in the letter.

Brahmins are also angry with Adityanath for what they believe is undue importance given to the chief minister’s Kshatriya caste members.

Verma, the MLA who quit on Thursday, said he would back Maurya’s decisions. Maurya has said he will join the Samajwadi Party on Makar Sankranti on January 14.

The BJP tried to highlight the work the party has done for the backwards. Singh, the state BJP chief, proclaimed on Twitter:

“No other government has ever given as much social, economic and political representation to the OBCs as the BJP (dispensation)…. Tipu Sultan is distributing poll tickets in black among those who are denied tickets of the double-engine train.”

Tipu is Akhilesh’s nickname. The BJP uses the term “double-engine” to describe governments of the party at the Centre and in a state.

Akhilesh told reporters on Thursday: “We welcome those who are coming to our party. It is an indication that the BJP will be wiped out in this election.”

Don't intend to go back to BJP: Maurya