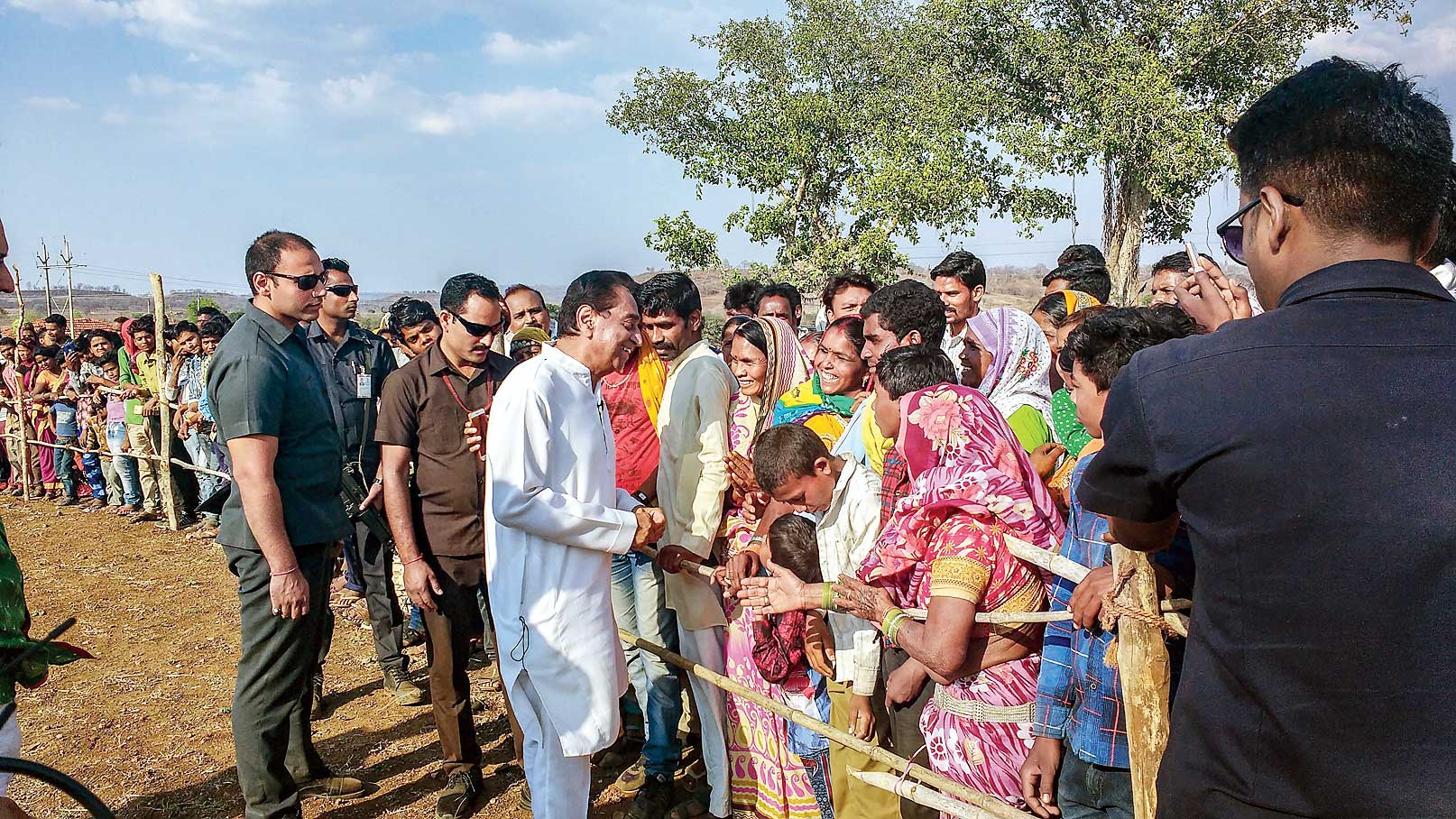 A voter in the Congress stronghold of Chhindwara, Verma is confident of a victory for party candidate Nakul Nath, son of chief minister Kamal Nath.

He says he loves Rahul Gandhi for promising the Nyay dole of Rs 72,000 a year to India’s poorest one-fifth households, which he says will benefit his family who have suffered successive crop failures because of erratic rains. But Verma isn’t sure of a Congress majority.

“I don’t know what happens at the border. Our boys go and fight. Everyone is talking about the surgical strike,” he says.

“I respect (Prime Minister Narendra) Modiji but we couldn’t exchange all our savings during the demonetisation, and our cooking gas subsidy has not come to our bank accounts. Par ayega toh Modi hi (Modi alone can win),” he tells The Telegraph over a cup of tea in Chourai.

“Ayega toh Modi hi” is a stock rejoinder Modi fans make on social media to any comment or news article that questions the NDA’s claims.

It isn’t just Congress supporters like Verma who are unsure of a victory for the party and Rahul. The feelings of uncertainty flow from the top.

“Of course, we are going to do very, very well but I do not see us reaching a majority and there will have to be a post-poll alliance and this post-poll alliance will throw up different types of combinations,” Kamal Nath had told PTI last week.

Be it Chhindwara, Mandla or Jabalpur — seats in the Gond tribal heartland of Mahakaushal where the Congress won 21 of the 31 Assembly seats in December — the party’s campaign focuses on unemployment under BJP rule and the strengths of the local candidate. Asked about Rahul, Congress workers at public meetings echo Nath.

This makes some of the voters jittery.

Sant Ram Uike, a waiter at a hotel in Chhindwara, proudly introduced himself as a Gond tribal and a supporter of Manmohan Shah Batti, a former Gondwana Ganatantra Party MLA who briefly joined the BJP and is now contesting from his own Akhil Bharatiya Gondwana Party in Chhindwara.

Uike, who recently passed Class XII, says he won’t waste his vote on Batti. He has been impressed by a speech Nakul Nath delivered promising to create more jobs.

He recounted his own experience of job-hunting. “I was asked to pay a bribe for recruitment to a casual vacancy in a public sector firm,” he said.

“I didn’t find a single other tribal at the interview. Maybe Rahul Gandhi can change this old system. But everyone says that only Modi can be Prime Minister.”

“Thanks to the media,” said the veteran Jabalpur-based editor Ravindra Bajpai, “Pulwama (the terror attack and the retaliatory air strike) has reached the villages…. People feel that Modi’s intentions are right, and Rahul is not taken seriously.”

He said the Congress was “unable to convince the people that it can win”.

“The annoyance against the BJP after its 15-year rule in the state was let off through the pressure valve of the Assembly polls,” Bajpai said.

“Now it’s Modi versus the Congress candidates. BJP MP Rakesh Singh is no match for the Congress’s Vivek Tankha. If Singh defeats Tankha again, it will be because of Modi.”

Tankha is focusing on the urban middle class, considered the BJP’s backbone. The Rajya Sabha MP and eminent lawyer has promised to “bring” a branch of the elite-Medanta hospitals and the Delhi Public School here.

“By only talking about Pulwama and surgical strikes you won’t bring jobs, tourism or an IT park here,” he said at a news conference on Saturday, the last day of campaigning before the April 29 vote in Jabalpur.

A senior PSU bank executive who has returned home to vote in Jabalpur told this newspaper the Congress here has been “ineffective”.

“I have seen the post-Babri rise of the BJP here, based solely on the Ram Mandir plank. The Congress leadership was ineffective, and turned this manufacturing hub into a retirement town,” he said.

“The BJP did nothing to change that, as the Ram Mandir continues to win votes. This time they want votes for people like Sadhvi Pragya — and they may get it too because many people are not willing to accept anyone but Modi.”

At Jabalpur’s grain market, Dinesh Malgam, a Gond peasant from Mandla, says that pregnant women from his village of Pindrai Mal still have to walk 30km to the health centre at Bijadandi for deliveries.

He says he has not received work under the MNREGA (rural job guarantee scheme) or rations for the last six months as his Aadhaar refuses to get linked to his job and ration cards. Manual labour can erode a person’s fingerprints, complicating Aadhaar identification.

“We were Congress voters but we voted for Modi the last time because we believed he would change our lives,” Malgam said.

“Roads and electricity have come but we can’t survive without MNREGA or rations. I will vote for anyone who can change things.”

Madhya Pradesh has the largest number of tribal voters in India — more than a crore, who make up almost 21 per cent of the state’s electorate.

Vikas Patel, a richer peasant who is a graduate and was at the market, said: “Neither party is honest. I would vote for (Delhi chief minister Arvind) Kejriwal as Prime Minister if he had a chance, but ayega toh Modi hi. His MLAs have said that the moment he wins, Congress MLAs will defect and the BJP will return to power in Madhya Pradesh.”