‘Hindu Raj’ in the land of Swami Vivekananda

Pragya Singh Thakur, the terror-accused MP, says Mamata Banerjee has gone mad after realising India is on the brink of a Hindu uprising 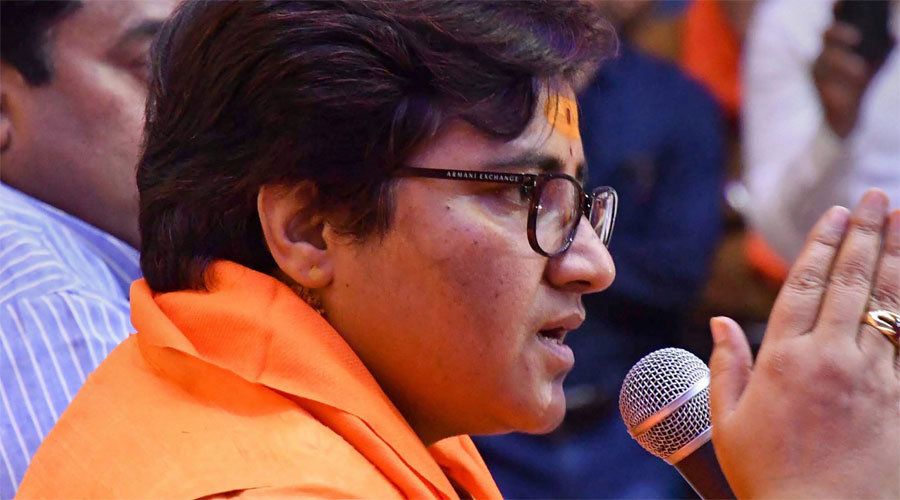 The real intention is out in the open, if anyone needed any confirmation.

Pragya Singh Thakur, who had described Nathuram Godse as a patriot and survived unscathed the purported inability of Prime Minister Narendra Modi to forgive her, has forecast a “Hinduon ka shasan (rule of Hindus)” in Bengal soon.

The predicted character of the government strikes at the very root of the cosmopolitan culture of Bengal, the cradle to a legion of social reformers, educators and scientists.

The description — nothing but a toxic and ill-concealed attempt at driving polarisation to a new low — also threatens to alienate over 3 crore Bengalis who belong to the minority communities and account for over 30 per cent of the state’s population.

Pragya, the terror-accused MP representing Bhopal, added that chief minister Mamata Banerjee had “gone mad” on realising that the “people of India, the Hindus” had risen to safeguard the country.

After participating in an event in Sehore, Madhya Pradesh, on Saturday, the MP was responding to a question on the attack on a few cars from BJP chief J.P. Nadda’s convoy in Bengal on Thursday.

Reached over the phone, the MP acknowledged she had spoken about Bengal in Sehore on Saturday but refused to comment any further.

“Useh ye samajh me aa gaya hai, ye Bharat hai Pakistan nahi jis par woh shasan kar rahi hai (She has understood that the region she rules over is India and not Pakistan),” the MP added.

The BJP refrained from reacting to her comments. The party’s newly appointed minder for Madhya Pradesh, P. Murlidhar Rao, didn’t respond to calls and a text message.

Ahead of the 2019 Lok Sabha poll results, Pragya had called Mahatma Gandhi’s assassin Nathuram Godse a “patriot”. Prime Minister Modi had then said he would “never forgive” her for the statement and Amit Shah had promised disciplinary action against her.

No action, however, was taken. Party leaders claimed she had been let off after a written apology.