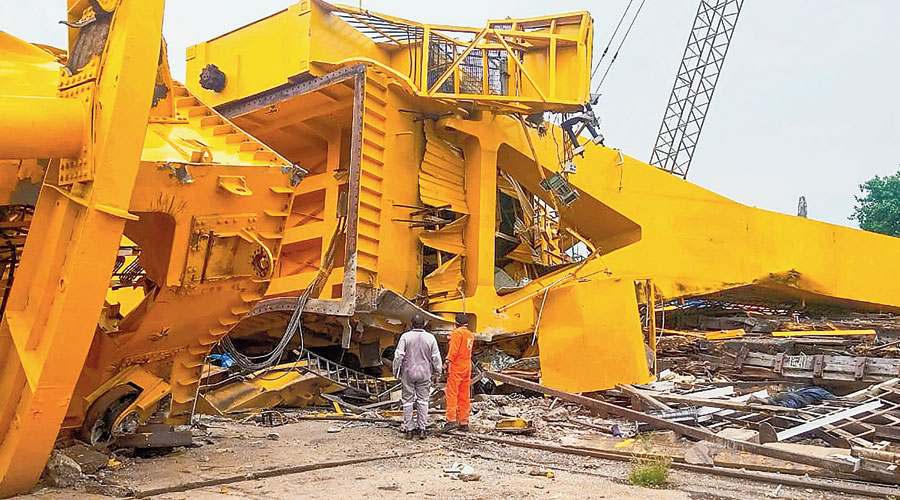 Eleven people were crushed to death under a monster crane that collapsed while it was being tested two years after installation at the Hindustan Shipyard Ltd (HSL) here on Saturday.

The 70-tonne rail-mounted jetty crane made of iron crashed with a loud thud after its cabin and base snapped during the trial run when a load test was being conducted. The yellow crane had been erected at HSL, a government of India undertaking, two years ago but had not been commissioned for regular operations due to change in contractors.

The HSL management, with the help of three new contractors, was conducting the test with a dead-weight load when the crane gave in, Visakhapatnam district collector V. Vinay Chand said.

Of the 11 deceased, four were HSL employees, including a supervisor, while the other seven were workers of the three contracting agencies, the collector told reporters after inspecting the mishap site. The bodies of the victims have been retrieved and sent for post-mortem.

While HSL has constituted an internal committee headed by its director (operations), the collector has formed an independent committee of engineers, comprising the heads of the departments of civil, mechanical and electrical engineering of the Andhra Engineering College, to investigate the cause of the crane accident.

“The committees will probe if there is any human negligence that caused the mishap,” Vinay Chand said.

Anupam Cranes of Mumbai had erected the jetty crane at HSL two years ago, but it had not been made operational. The company later backed out of the contract and HSL engaged Greenfield Company to operationalise the crane. HSL also contracted Lead Engineers for maintenance and Squad7 for regular operation of the crane.

“These contractors had commenced the full load trials and the testing was being done when the tragedy occurred,” Vinay Chand said.

Three workers of Greenfield, two of Lead Engineers and one of Squad7 died in the accident. One victim is yet to be identified. This was the first major mishap in HSL’s 75-year history. Visakhapatnam, however, has been witness to several industrial accidents in the past few years.

Twelve people had died and hundreds had fallen ill when styrene monomer stored in a tank in an LP Polymers plant had leaked on May 7. A fire at the Hindustan Petroleum Corporation complex here claimed 28 lives in 2013. As many as 19 people were burnt alive and scores injured in an explosion at Visakhapatnam Steel Plant in 2012.