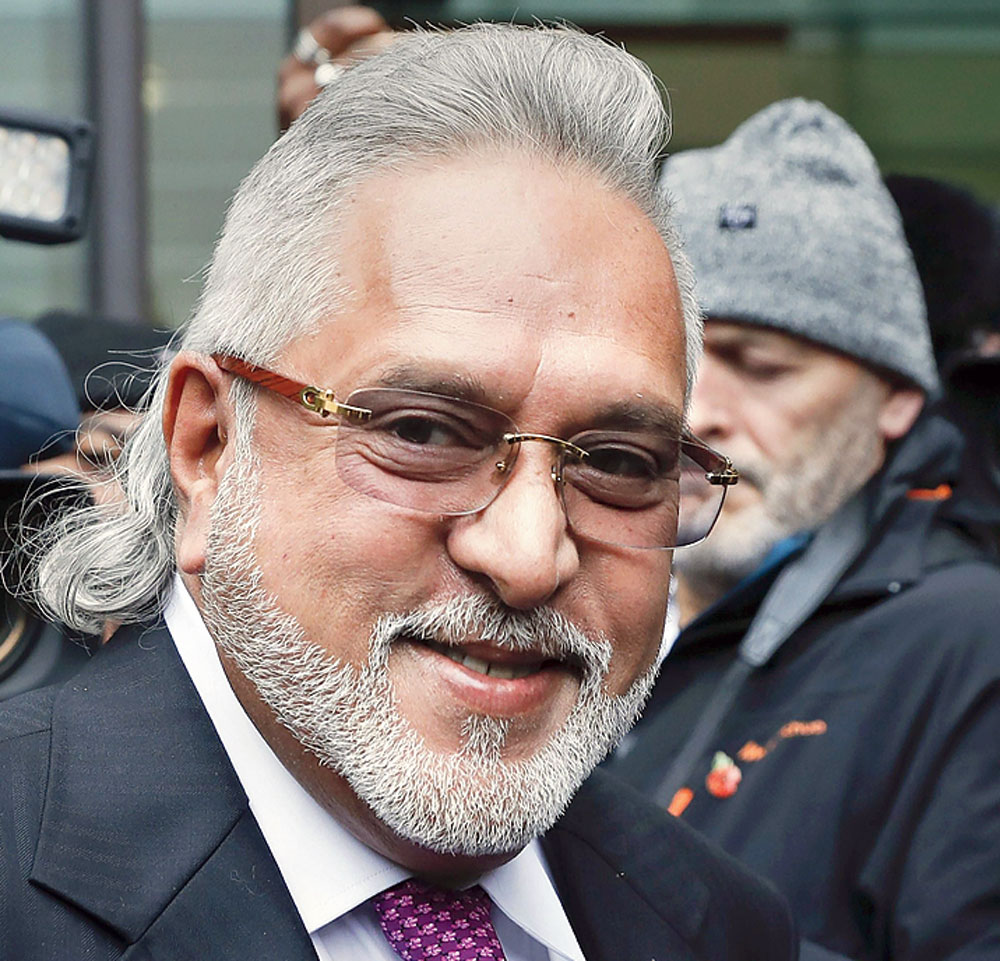 Vijay Mallya has 14 days to lodge an appeal in the high court. If he loses that, he must be extradited within 28 days of the end of the appeal process if the home secretary sanctions the court decision.
The Telegraph file picture
Amit Roy   |   London   |   Published 09.12.18, 09:37 PM

Vijay Mallya will learn on Monday whether New Delhi has been successful in securing an extradition order against the 62-year-old businessman to face charges in India of bank fraud and money-laundering that allegedly total Rs 9,000 crore.

Emma Arbuthnot, chief magistrate at the Westminster Magistrates’ Court, is to deliver the judgement after a year of legal arguments between Mark Summers, QC, representing England’s Crown Prosecution Service that is acting on behalf of the Indian government, and Clare Montgomery, QC, representing Mallya.

Summers has argued that Mallya borrowed large sums from Indian banks but had no intention of honouring his debts.

At the start, the judge needed to have words such as “crore” and “lathi” explained to her.

Even if the judgment goes against Mallya, he will not have to board an India-bound flight on Monday evening to be delivered to Barrack 12 in Mumbai’s Arthur Road Jail.

First, the final decision whether he should be extradited rests with Sajid Javid, the Pakistani-origin home secretary. Javid is currently absorbed in Brexit politics and has been tipped as a candidate to succeed Theresa May if the Prime Minister loses Tuesday’s Commons vote on her withdrawal agreement and is forced to resign.

Mallya has 14 days to lodge an appeal in the high court. If he loses that, he must be extradited within 28 days of the end of the appeal process if the home secretary sanctions the court decision.

If the decision goes in Mallya’s favour on Monday, the Crown Prosecution Service too has 14 days to appeal.

The extradition agreement signed between the UK and India in 1992 came into force in November 1993. India was the keener of the two to get an agreement in place, mainly to get back offenders accused of promoting terrorism against India from British soil.

Securing extradition orders has not proved easy because the British judge has to be satisfied that “the conduct described in the warrant amounts to an extradition offence, and meets, in almost all cases, the requirement that the conduct would amount to a criminal offence were it to have occurred in the UK, and minimum levels of severity of punishment”.

In the last few days, Mallya has been busy on Twitter emphasising his willingness to pay up -– although this line of defence was not emphasised on his behalf during the legal proceedings.

Mallya, who was always granted bail, arrived in court carrying a bottle of water and wearing a jaunty yellow tie on day one. His preference has always been for polka dots, appropriate because Montgomery, widely regarded as “the top woman lawyer of her generation”, kept picking what she claimed were holes in the Indian government’s case.

She has argued that Kingfisher Airlines “was being treated differently from Air India which had larger debts”, and that the CBI cannot be trusted because the Indian government uses it as a political instrument.

“There has been political interference with the prosecution process in a way that is improper,” Montgomery said at one stage. She said “the CBI has a long and glorious history” of corruption and was being politically manipulated.

“The CBI responds to requests made by its political masters from time to time. The same can be said for the Enforcement Directorate,” she went on.

Speaking of the jail conditions her client might have to countenance, she picked on “deplorable” and “simply appalling”, citing Alipore Central Jail as an example.

She hasn’t always won, though.

In 1998, she unsuccessfully represented former Chilean dictator Augusto Pinochet, then 83, who was arrested in London while seeking medical treatment. There was an extradition demand from Spain on torture charges. Margaret Thatcher, former British Prime Minister, was also on Pinochet’s side. He was sent back to Chile.

In 2012, Montgomery appeared for the Swedish judicial authorities who wanted Julian Assange, the Wikileaks founder, sent back to face legal action on rape charges but he is still holed up in the Ecuadorian embassy in London.

A joint team of the CBI and the Enforcement Directorate, led by CBI joint director A. Sai Manohar, has reached the UK to attend the court proceedings.

Sources in the CBI said Manohar, accompanied by two ED officials, left for the UK on Saturday. Earlier, the now-benched CBI special director Rakesh Asthana headed the probe and had flown to London several times to attend court hearings.

Last week, Manohar, along with other agency officials, had gone to Dubai to bring to India Christian Michel, who was wanted in the AgustaWestland chopper case.

Vijay Mallya offers to pay back loan in full