UP police accused of stripping cleric 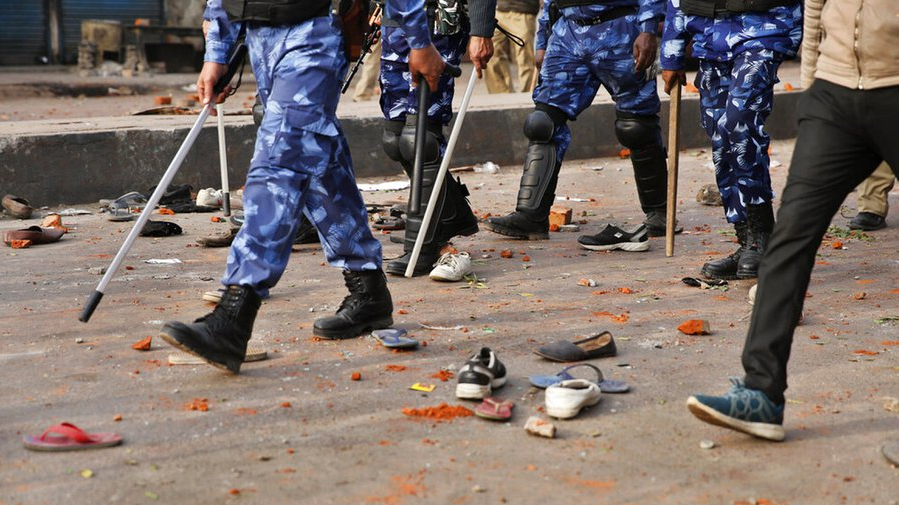 A bedridden Maulana Asad Raza Hussaini, 66, both arms and both legs bandaged, “sobs in his sleep” and refuses to “show his face” to visiting relatives because, his family says, he cannot get over his humiliation by the police who stripped and tortured him in custody.

The police also detained and assaulted almost all the maulana’s 100-odd students from the Saadat hostel-cum-orphanage in Muzaffarnagar town, many of them minors and most of them orphans, local people said.

“The boys were denied access to the toilet at times, and some of them suffered rectal bleeding from the torture,” said Salman Saeed, local Congress politician and son of former MP Saiduzzaman Saeed, who lives nearby.

Maulana Asad, teacher at the Saadat Madarsa and caretaker of the orphanage, was beaten with a baton and dragged out of the hostel on December 20 afternoon after violence at an anti-citizenship act protest nearby.

He has told his family he was kept for over 24 hours in a dark room at the Civil Lines barracks, where he was stripped in the biting cold and beaten.

In an adjoining room, the students — aged 14 to 21 — were abused, thrashed with sticks through the night and forced to kneel against the wall, neighbours who spoke to the boys after their release said.

Some of the students were forced to chant “Jai Shri Ram”, Saeed said.

“On Saturday night, a cop called us to say the maulana would be released soon and asked us to bring his clothes. We were shocked and could not understand why he needed clothes,” a relative said, asking not to be named because he feared reprisal from the police.

“We carried a set of kurta-pyjamas to the Civil Lines barracks and handed it over to the cops. Half an hour later we saw him limping out of the police station, his arms around the shoulders of two cops. He could not lift his head and was in severe pain. We virtually carried him to the car and brought him home.”

Maulana Asad has injuries across his body, including all four of his legs and arms, the relative said.

“He was subjected to unimaginable cruelty and humiliation. He was not produced before a magistrate even after 24 hours in custody. Family members cried with him throughout Saturday night as he narrated his ordeal,” the relative said, his eyes welling up.

“He is mentally scarred. He told us the police made him wish he were dead. He was humiliated so much that he is refusing to show his face to relatives coming to see him. He sobs even in his sleep.”

When this correspondent reached Maulana Asad’s home near Meenakshi Chowk in Muzaffarnagar town, his family had initially refused to talk.

“We are terrified. The police have told us not to speak to anyone,” a family member said.

She said the entire Muslim community in the area was living in fear. “One does not know when they will raid our homes at night and vandalise them,” she said.

“You will write about us and return to Delhi but we have to live here with our children. We are living in a time when we cannot open our mouths and narrate our plight.”

Asked whether the family had met senior district officials to complain against the police, she shot back: “When the police and the government have become oppressors, who do we go to?”

The Telegraph tried to get in touch with senior police officials of the district but the calls were not answered. The newspaper spoke to a senior official who declined to comment on the allegations against the police.

Congress politician Saeed, who alleges the police vandalised his farmhouse and torched his cars after the December 20 protest, described the plight of the detained madarsa students.

“They were abused, deprived of sleep, starved of food and water at times, shackled and barred from using the toilet. The authorities did not allow lawyers to see them,” he said.

“Some of them were asked to chant ‘Jai Shri Ram’. The police have now released around 90 of the students, including all the minors, after three days of detention. They have arrested 10 students on charges of rioting. They are now in judicial custody.”

Saeed said the madarsa was now deserted as almost all the students had fled to homes of relatives and acquaintances in various parts of Uttar Pradesh.

Mohammed Sattar, an eyewitness from the locality, said the protesters had begun gathering at Meenakshi Chowk from 2pm on December 20, after namaz, at a spot less than 500 metres from the madarsa.

“It was a peaceful protest and the organisers were in constant touch with the police. As the protesters began dispersing around 3.45pm-4pm, stones suddenly began raining,” he said.

“Nobody knows who started it. People ran helter-skelter. There was arson when the police started a baton charge. We don’t know who set the police vehicles on fire.”

Sattar said the police then went on the rampage and started thrashing people and vandalising shops in the Muslim neighbourhood.

“Some of the protesters ran and hid inside the madarsa. A group of policemen then barged in, beat the students mercilessly and rounded up almost all of them,” Sattar said.

“They entered Maulana Asad’s room where he was resting after the prayers. Neither he nor the students had participated in the demonstration.”

Sattar said the police dragged the maulana out, beat him and the students, bundled them into a van and whisked them away.

After their release on December 23, many of the students were shaking all over, he said. “I have never seen anyone so frightened in my life.”

Saeed, the Congress politician, said the situation had been normal on December 27 after the Friday prayers.

He said the police were pressuring the family of Noor Mohammad, 26, a hawker, who died of a bullet injury during the December 20 protest at Meenakshi Chowk.

Noor died in police firing, alleged his elder brother Umar. He said the police had refused to accept a complaint from him and Noor’s wife Shanno, 19.

“When we went to the police station, the cops said the complaint would not be accepted. They told us that Noor had died of bullets fired by the protesters — which is completely false,” Umar, who said he was at the protest spot with his brother, asserted.

The day labourer accused BJP and RSS supporters of inciting and executing the violence.

He said: “The police have not given us the post-mortem report. They did not allow his body to be buried here, saying it would lead to a communal flare-up. The body was buried near Meerut. We are illiterate people and fear that the cops might frame me in a criminal case.”