Advertisement
Home / India / Unite and create your own space: Priyanka taps woman power in UP

Unite and create your own space: Priyanka taps woman power in UP 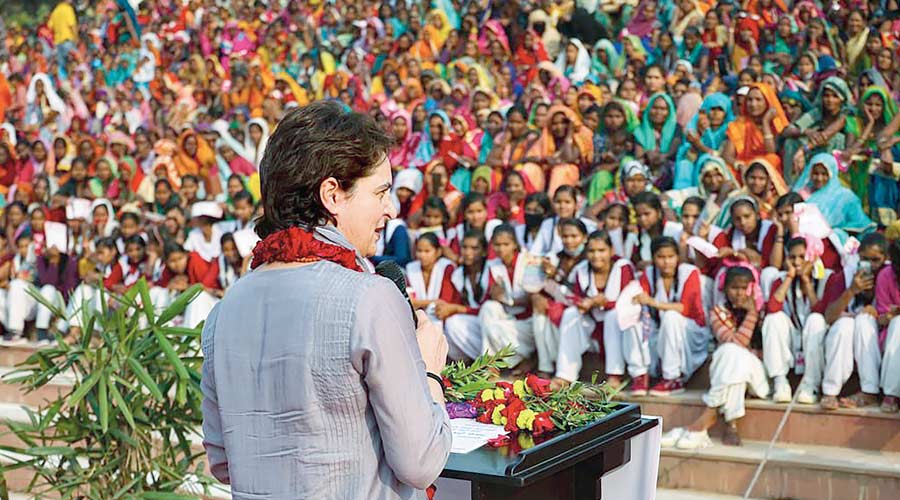 Congress general secretary Priyanka Gandhi Vadra on Wednesday appealed to the women of Uttar Pradesh to unite and create their “own space” in the Assembly elections next year through independent decision-making, stepping up political mobilisation along gender lines after promising to reserve 40 per cent seats for women.

Speaking at an all-women programme in Chitrakoot — called Ladki Hun, Lad Sakti Hun Dialogue, or I am a girl and I can fight — Priyanka said: “Nobody will fight for you. A woman’s struggle is her own. You are half of the population. Unite and create your own space. Why support a government that doesn’t work for you? Blindly vote for women candidates wherever they are contesting.”

Such a campaign is unique in Indian politics and even strong leaders like Indira Gandhi had not attempted it. Women leaders who have been hugely popular in their respective states, such as Mamata Banerjee, Jayalalithaa and Mayawati, have also never tried to create an exclusive constituency based on gender.

She was referring to the Mahabharata in which Lord Krishna had intervened to save Draupadi when she was being disrobed on the orders of Dushasan. The message was that in this era women should be prepared to fight for themselves and not wait for Lord Krishna to arrive and save them.

The Draupadi symbolism evoked a thunderous applause as Priyanka explained: “When I say, ‘ladki hun lad sakti hun’, that doesn’t mean you start fighting. Don’t go and fight with your husband. What I mean is that you learn to raise your voice. Create your own political space.

“Only women’s participation in decision-making will ensure gender justice. Don’t expect help from those who exploit you, who are your oppressors. Whether women candidates win or lose, this election will carve out a space for them.”

The Congress leader asserted that the next aim would be to reserve 50 per cent seats for women in elections to ensure equal participation.

“This process started by the Congress cannot be reversed now. The next step will be 50 per cent — equal participation. Every political party will have to do this sooner or later. Women’s participation will also bring down violence and brutality in politics,” Priyanka said.

“Haven’t you seen governments protecting the perpetrators of crimes, not the victims — as happened in the Lakhimpur massacre (of protesting farmers)? Haven’t you seen the exploiter getting the victim embroiled in legal cases? Rise and fight your own battles,” she said.

Going beyond symbolism, Priyanka pledged a concrete deal for women should the Congress come to power.

“Apart from scooties and smartphones for girl students, 40 per cent of government jobs will be reserved for women. In every district, there will be exclusive schools and vocational training centres for girls. For increasing women’s security, a law will be brought in for automatic suspension of police officers within 10 days if FIRs are not lodged on complaints,” the Congress leader said.

Priyanka said that at least one-fourths of the staff at every police station would be women. “In every district, there will be a commission of former judges and activists to address the grievances of women. Widow pension will be hiked to Rs 1,000. Asha and anganwadi workers will get at least Rs 10,000 a month. All women will get free treatment up to Rs 10 lakh each for any disease.”

While the thousands of women who attended the event welcomed the promises with enthusiasm, many who spoke at the conference highlighted how they had to struggle for livelihood and justice.

An anganwadi worker, Mithilesh Shukla, said the BJP government had not increased their remuneration by even a rupee while tormenting them for protesting against the administration. She said anganwadi workers were often accused of being “thieves” by villagers because food distributed through them by the government for, say, 150 people was barely sufficient for 75.

While Bharti, a lawyer, said the lives of women had become miserable under the BJP, pharmacy student Tanya Gupta complained about lack of educational and health facilities locally.

Gupta said critical patients coming to the district hospitals were usually referred to Allahabad and many died on the way, puncturing the claims of Prime Minister Narendra Modi and chief minister Yogi Adityanath that Uttar Pradesh was the best-governed state.

Priyanka weighed in by pointing out how the BJP governments had done nothing when millions of migrants had to walk thousands of miles to return home during the pandemic while buses lined the streets for the Prime Minister’s election rallies.