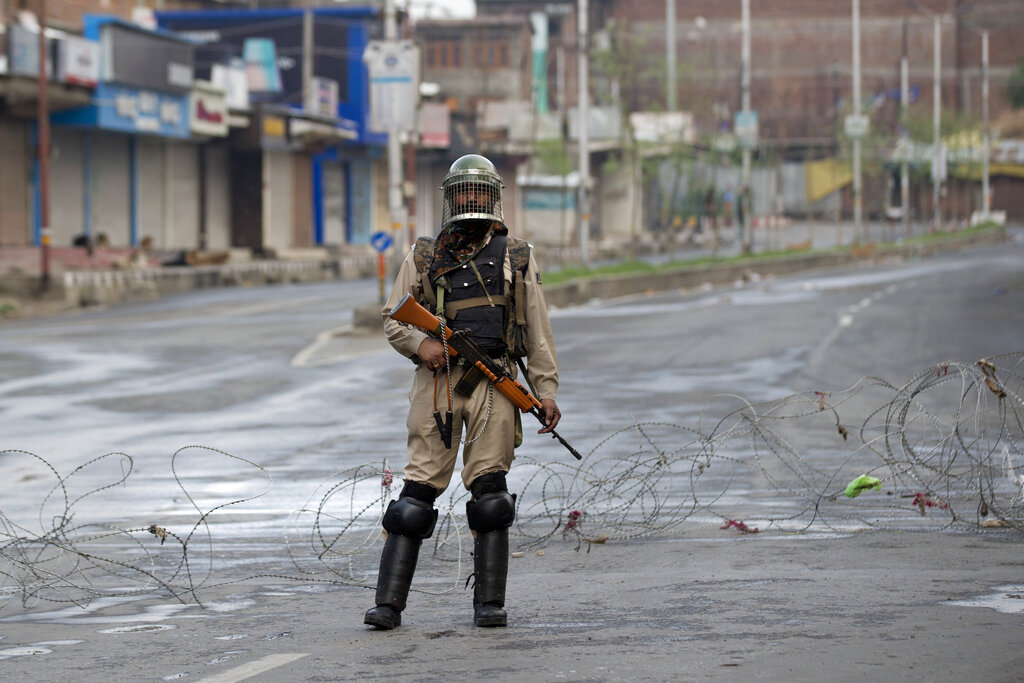 Muzaffar Raina, The Telegraph’s Srinagar-based journalist who covers Jammu and Kashmir, was unable to file any report since Sunday midnight because the regular communication channels were shut down.

Raina despatched three reports on Wednesday by typing them out on his computer, taking screen shots and sending them to New Delhi, from where they were transmitted to Calcutta.

The Kashmir Valley has been unlike its usual self after the Centre announced its decision to strip the state of its special status, its streets betraying surprising indifference. There have been only a few incidents of stone-throwing and fewer signs of public outrage.

But the questions on everyone’s lips are whether this is the lull before the storm and whether Kashmir would ever be the same again.

“Kashmir is now formally a colony of India. If they (the Centre) are telling you this will end the conflict, the fact is you have taken the conflict to every home,” an academic earlier associated with Kashmir University said.

“There were always fears that India would turn Kashmir into a Palestine and you would be driven out of your homes. There were fears that they would change the demography of this place by letting outsiders settle here. That is now a reality. I dread that the labourers (from other states) who built my house might now come to stake claim to it,” the academic said.

The decision to abrogate the provision of Article 370 that gave Kashmir its special status has stunned the Valley into silence.

On Monday, when the decision was announced, there was hardly any stone-throwing at the security forces, a common mode of protest. Such incidents have, however, picked up since.

But if the authorities had predicted 10 times more violence than that witnessed after the killing of Hizb commander Burhan Wani in the summer of 2016, it hasn’t been 10 per cent of that.

Srinagar’s old city, the epicentre of pro-azadi protests, has been sealed and, virtually, not even a bird is allowed to fly.

On the 10km road from Habak to Lal Chowk, which this correspondent took to reach the city centre, things looked pretty relaxed on Monday, although the road was teeming with the security forces. Markets were shut and hardly any vehicles plied.

At the Kashmir University campus, some boys were playing football. At Nowpara, so-me were playing cricket. At Ashai Bagh, some youths jumped off a bridge to enjoy a swim in the lake while a few others were busy fishing.

Perhaps a happy turn of events for the government, perhaps not.

To say people are not outraged at the government’s decision would be mistaken. Deep inside, everybody seems shaken to the core.

For most of the azadi-loving people of the state, defending Article 370 has never been the goal. They always wanted something bigger — complete secession. The constitutional provision, nevertheless, gave them a degree of autonomy, which they had always held dear.

One reason why Kashmir has not erupted is the unprecedented clampdown. Tens of thousands of security personnel have been deployed to enforce what is for all practical purposes a curfew, but officials won’t call it so — a practice in vogue for years to give the impression that all is well.

Kashmir has seen trouble in the past, but never such an information blockade. Phone and Internet services are shut and cable TV services have been suspended.

Another reason behind the apparent calm is the three-year-old iron-fist policy pursued by the government since Burhan’s killing. Most separatists were already behind bars or under house arrest. There is a lot of fatigue because of the countless strikes and protests, and the government seems to have prepared well and timed its moves right.

But if there is one discussion that is taking place in every home, outside every shop and among the youth who are seemingly busy fishing, it is about what strategy the people should device to counter the government’s steps.

“We should have all been on the roads protesting, but that is what we have been doing all our lives. They (New Delhi) have declared war on us and our reaction has to be calculated,” a youth said at Dalgate. Others echoed him.

“I think this decision has destroyed the peace of this place permanently.”

Some expressed frustration with Pakistan, asking when it would intervene.

“They call it (Kashmir) their jugular vein. If they don’t act now, when will they?” asked a former bureaucrat who was part of an intense discussion on the lawns of an empty hotel at the famed Boulevard Road.

Kashmir had been abuzz with rumours before Monday about something unprecedented being in the works. But the worst the people had expected was the scrapping of Article 35A, which gave the local population exclusive rights over land and jobs.

The announcements that followed took everyone by surprise.

“They have uprooted the entire tree (by abrogating the provision of Article 370 that gave special status to Jammu and Kashmir). Its tremors will be felt for times to come,” a hotelier said.

Many fear it will boost radicalisation and give further impetus to the militancy.

The administration is urging people to maintain calm but has vowed to crush violence.

“Anybody inciting people to commit acts of violence will be dealt with sternly and nothing will prevent the state from restoring order,” an official spokesperson said.

While the curfew is likely to continue, the next major challenge will come on Id-ul-Azha, which falls on August 12. It is not clear whether big congregations will be allowed, but many are expected to use the occasion to show their strength.