Advertisement
Home / India / Ultimate question perhaps is whether 'jallikattu' can be allowed in any form: Supreme Court

Ultimate question perhaps is whether 'jallikattu' can be allowed in any form: Supreme Court 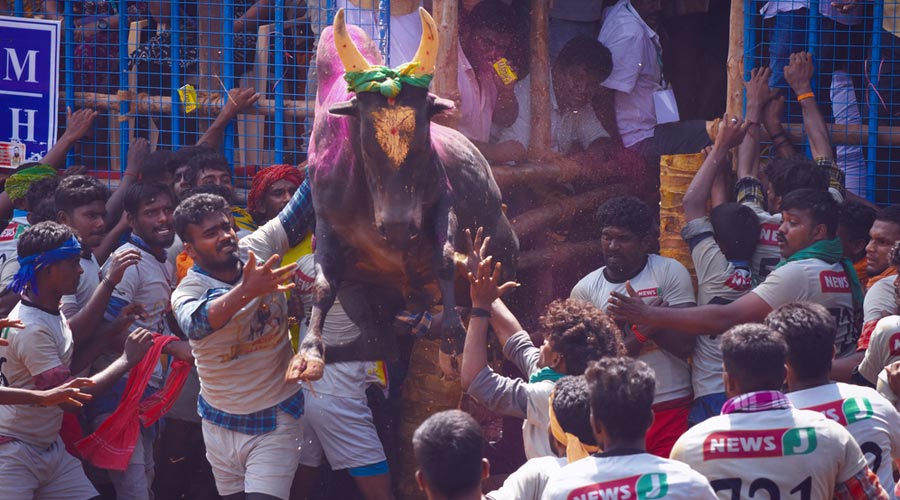 The Supreme Court, which is hearing a challenge to a Tamil Nadu law allowing "Jallikattu", on Wednesday observed the "ultimate question" perhaps might be whether the bull-taming sport, dubbed by many as cruel to animals, can be allowed in any form.

"Jallikattu", also known as "eruthazhuvuthal", is a bull-taming sport played in Tamil Nadu as part of the Pongal harvest festival.

The lawyers appearing for several petitioners told a five-judge Constitution bench headed by Justice K M Joseph that allowing something which is cruel to an animal cannot be permitted.

The bench said it is the case of the Tamil Nadu government that these bulls are trained and treated with greatest of affection.

The apex court had, in its 2014 judgment, said bulls cannot be used as performing animals either for "jallikattu" events or bullock-cart races, and banned their use for these purposes across the country.

It had earlier dismissed the Tamil Nadu government's plea seeking a review of its 2014 judgment banning the use of bulls for "jallikattu" in the state and bullock-cart races across India.

Tamil Nadu had amended the central law -- The Prevention of Cruelty to Animals Act, 1960 -- and allowed "jallikattu" in the southern state.

During the day-long arguments on Wednesday which continued till 5.30 PM, the bench observed after the amendment was made, the state came out with certain rules with precautions to be taken care of under the aegis of the district collector concerned.

Justice Rastogi observed the problem is that the rules may be in any form, but the ground realities never match.

Senior advocate Shyam Divan, appearing for some of the petitioners, said despite the "cosmetic change", compelling the bull to fight with all the best safeguards still amounts to cruelty to the animal.

He said taking care of the bull is good but that does not mean that one can subject the animal to cruelty.

Senior advocate V Giri, appearing for some other petitioners, said validity of a legislation cannot be tested or defended by a reference to the rules.

An advocate, appearing for one of the petitioners, said the 2014 judgement of the apex court clearly said bulls cannot be used as performing animals either for "jallikattu" or bullock-cart races.

The arguments in the matter will continue on Thursday.

Some of the petitioners had on Tuesday argued that when the law prohibits cruelty to animals there cannot be an amending Act which perpetuates cruelty.

The Constitution bench had on November 24 commenced hearing arguments on a batch of petitions challenging the Tamil Nadu and Maharashtra laws allowing "jallikattu" and bullock-cart races.

The Tamil Nadu government recently told the top court that "jallikattu" is a religious and cultural festival that bears a "religious significance" to the people of the state and does not violate the provisions of the Prevention of Cruelty to Animals (PCA) Act, 1960.

In a written submission filed in the apex court, the state has said "jallikattu" is not merely an act of entertainment or amusement but an event with great historic, cultural and religious value.

The apex court is considering the five questions referred to it by a two-judge bench of the top court in February 2018.

Referring the issue to the five-judge bench, the apex court had said the petitions challenging the Prevention of Cruelty to Animals (Tamil Nadu Amendment) Act, 2017 need to be decided by a larger bench since those involve substantial questions related to the interpretation of the Constitution.

On the five questions referred to the larger bench, the top court had said it needs to be tested if the amended Act "perpetuates cruelty to animals" or "can it, therefore, be said to be a measure of prevention of cruelty to animals".