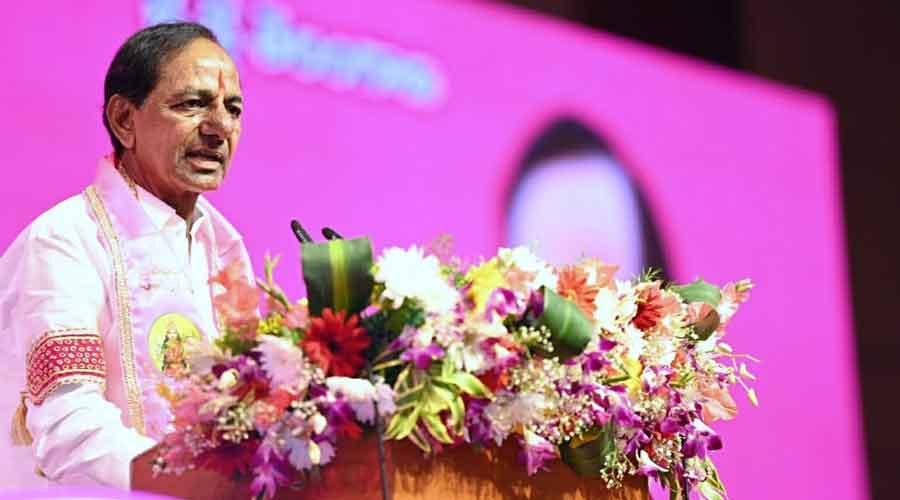 The Telangana Rashtra Samithi on Wednesday decided to join the leadership race in the Opposition against “bulldozer governance”, but chief minister K. Chandrasekhar Rao made it clear that the need of the hour was an alternative agenda, not a new political front.

The development comes three days after the TRS signed up poll strategist Prashant Kishor’s I-PAC for the 2023 Assembly elections.

The decision to expand its footprint beyond Telangana was taken at the 21st foundation day of the TRS in one of the resolutions adopted at the plenary held in Hyderabad. As per the resolution, moved by KCR’s son and IT minister K.T. Rama Rao, the TRS will play a role in national politics so that the absence of a strong leadership at the national level is addressed.

The Telangana model of education, health, irrigation and economic progress will be presented as the agenda along with fighting to free the country from “bulldozer governance”, the resolution said.

Addressing the plenary, KCR said a party legislator had also suggested that the TRS be renamed Bharatiya Rashtriya Samithi to match the aspirations for a national footprint. He criticised the continuous efforts to polarise the country without naming any party and said what was needed was an alternative agenda, not a coming together of various parties to form a front as is often attempted ahead of elections.

Since forming the government in Telangana in 2014, the TRS had seldom taken a stand against the BJP and avoided Opposition groupings with KCR maintaining that as a new state it cannot afford to have an antagonistic relationship with the Centre. The TRS often used to bail out the BJP during crucial votes in the Rajya Sabha where the ruling party initially did not have the numbers to pass legislation.

However, on certain issues like the farm laws, the TRS differed with the BJP. And, after the BJP won the Huzurabad by-election in November 2021 and made inroads in the Greater Hyderabad Municipal Corporation polls, the TRS has become more strident in its criticism of that party, protesting in Parliament against the Narendra Modi government’s failure to procure all the paddy grown in the state as promised.