We want to see her as prime minister, says Kalyan Banerjee after a meeting in New Delhi 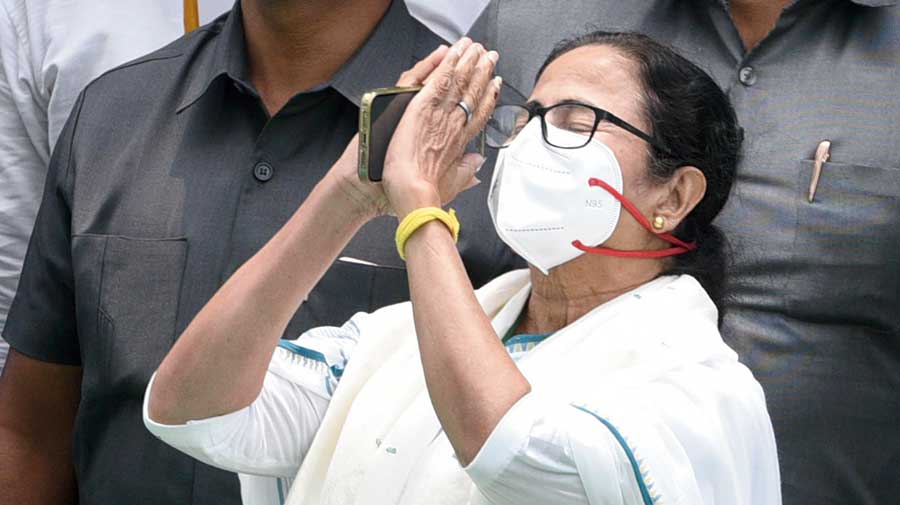 Around 30 MPs of the Trinamul Congress called out in one voice to anoint Mamata Banerjee as the leader of the Opposition for the 2024 general elections in Delhi on Wednesday, Day Two of her visit to the national capital in preparation for the Lok Sabha elections of 2024.

"She will lead the battle for 2024 against the BJP. We want to see her as prime minister. All of us told her so," said Trinamul MP Kalyan Banerjee after a meeting held at the New Delhi residence of the party's Rajya Sabha MP Sukhendu Shekhar Roy.

Chatting with reporters after the meeting, Mamata said, "I am not a political astrologer. The leadership issue depends on the situation, structure and system in place. It is not that everybody can take the lead. When the matter is discussed, we can work together."

"When Narendra Modi contests the next poll it will be him against the whole country," Mamata said

Mamata's idea behind pitching for the 2024 polls from now is to keep up the momentum she has gained from this summer's assembly polls which she won decisively to stop the BJP on its tracks. But she is not the only chief minister to successfully thwart the BJP's regional ambitions. In Pinarayi Vijayan's Kerala, the BJP could not win a single seat. In Tamil Nadu, the MK Stalin- led alliance that includes the Congress and the Left also defeated the BJP.

As of now though neither Vijayan nor Stalin have made any national noises.

"It is too early to commit on a united front with poll projections from now. This has never been done," said a Congress MP.

In fact, during the second term of the UPA when it was becoming clear that the BJP would mount an offensive on the Congress with a concerted campaign, the saffron combine had not rushed in to project a prime ministerial face. It was only in September 2013 did it declare Narendra Modi as its prime ministerial nominee.

Trinamul's political fortunes may be on the upswing, but it is unlikely to stay so till 2024. A test of its strength would be in the form of Bengal's civic polls. In some instances like Calcutta Municipal Corporation, elections should have been held in 2020 but got delayed due to the Covid pandemic.

But Mamata cannot use the Covid shield to delay the civic polls indefinitely. Memories of the 2018 panchayat polls when Opposition parties were not allowed to file nominations are not yet distant. Mamata felt the backlash in 2019. Local Trinamul leaders have already started threatening Opposition workers against filing nominations for the panchayat polls due two years from now.

Having got herself declared as the chairperson of the Trinamul's parliamentary party, Mamata's visits to Delhi are likely to be more frequent in the coming months to keep reinforcing her claim as the most credible face against Modi. Even if she manages to stitch an alliance with the Congress in Bengal, it is unlikely to leave more than two seats for the grand old party.

Without spelling out a seat-sharing formula, simply announcing a PM face will not help create an Opposition front.

Since the 2019 polls, most of the major Opposition parties have been jointly signing statements against the Modi government. These had signatures of leaders from both the Left and Trinamul. That does not necessarily translate into an electoral adjusdtment.

Mamata's message to her party workers was to concentrate on proceedings within the House. Mamata warned the MPs against meeting BJP ministers individually and without permission from the leadership. "Some months ago, Dibyendu Adhikary went to meet Modi. There is a feeling some people could strike deals especially before polls," said a Trinamul source.