Toddler on body made propaganda tool 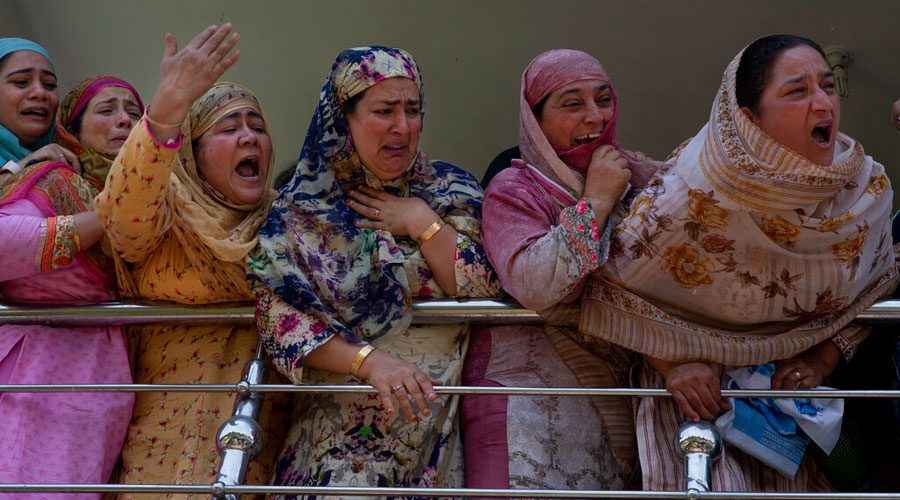 Relatives of Kashmiri civilian Bashir Ahmed Khan grieve as they watch his funeral on the outskirts of Srinagar on Wednesday.
AP
Muzaffar Raina   |   Srinagar   |   Published 02.07.20, 04:06 AM

Kashmir is no stranger to bloodshed but unattributed photographs that emerged from the site of a gunfight on Wednesday morning sent shockwaves across the country.

One picture shows three-year-old Ayaad sitting on the chest of his grandfather whose lifeless body is lying supine on the side of a road. Big stains of blood are visible on the attire of Bashir Ahmad Khan, the boy’s grandfather and a  Srinagar resident.

The boy, whose right shirt sleeve is soiled, appears oblivious to the tragedy that had unfolded around him. The child is seated close to the chin of the grandfather and the boy’s right foot reaches up to the grandfather’s navel.

In another  picture clicked from behind, the boy sits on the body and his feet are on the ground.

A third picture shows the boy walking away from the body. A gun-wielding CRPF jawan, whose kneeling posture suggests he has taken position for an encounter, can be seen gesturing at the child to move away.

Another photograph shows the child in the lap of a police officer.

A video clip showed the boy crying inconsolably inside a police vehicle. He has chocolates  in his hands, apparently gifted by the police.

Some time later, a BJP leader tweeted these pictures and blamed militants for the killing in North Kashmir’s Sopore. A Union minister tweeted about the incident and wondered whether “apologists” for terrorism would not wake up.

Khan’s family members blamed the security forces and said the child was placed on the grandfather’s body.

A photojournalist in Sopore, who reached the encounter site 15 minutes after the gunfight was over, said the pictures showing the boy on the grandfather’s body were not clicked by any known photographer in the town.

“Somebody else did it. The encounter started at 7.15am and ended in the next 15 minutes. I reached the spot around 7.45am and there were already a couple of photojournalists there. As far as I know, none of us clicked them,” he said.

“In next hour or so, these pictures were all over on social media. We are shocked and do not know who clicked them.”

The mud on the boy’s sleeve suggests he had a fall before he sat or was seated on his grandfather’s chest.

The gunfight in Sopore killed a CRPF head constable and Khan, 65.

“As the troops were de-bussing from the vehicles to occupy their respective spots of deployment, militants hiding in the attic of a nearby mosque started firing indiscriminately on the troops, resulting in injuries to the four CRPF personnel,” he said.

“Later, one of the injured, HC (head constable) Deep Chand succumbed to his injuries. One civilian died on spot in the attack,” the spokesperson added.

(The security forces had not announced the death of any militant in the encounter till Wednesday night.)

Jitendra Singh, the minister of state in the Prime Minister’s Office, too tweeted: “In a heartbreaking incident, an elderly person was killed by terrorists, when he was carrying his grandchild to buy milk. The confused wailing child was rescued by our security forces. Will the apologists for #Kashmir terrorism, at least now wake up?”

The family members not only blamed security forces for the killing but suggested the event was choreographed soon after the gunfight.

In a video statement shared on social media, Suhail Ahmad, son of the slain Bashir Ahmed Khan, said CRPF personnel “dragged him out of his car and shot him dead”.

Ahmad said his father had gone to Sopore to oversee the progress of a construction project and he took his grandson along.

Sopore police denied reports that Khan was gunned down by the security forces and warned of legal action against “false reports and rumours.”

Valley police chief Vijay Kumar said militant threats forced the family to release the video but he did not disclose how the police reached the conclusion.

“Bashir Sahib was driving his car and a kid was travelling with him. As firing took place, he panicked and tried to escape along with a kid and he was hit by a bullet and died,” the inspector general of police (IGP) said.

“Some miscreants spread rumours and also due to the militant threat, his son also released video (accusing the CRPF) which is totally baseless,” Kumar added.

The IGP wondered how the family knew who killed him when they were not present at the spot.

“Did they see themselves who fired? They circulated video messages blaming forces for killing their father from Srinagar, which is totally baseless,” he said.

While the family was not present there, the police are yet to produce evidence that Khan was killed by militants.

“We would have expected no less from the men in uniform than to rescue the young boy & for that they have our gratitude but we would expect better than for them to film & use a three year old’s pain the way it’s being done today.”