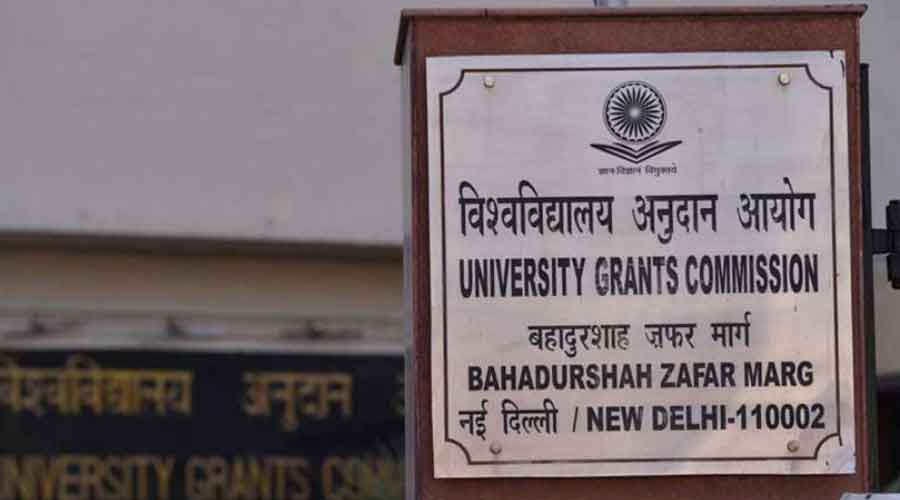 According to the official figures, out of the 2,338 sanctioned posts in the colleges affiliated to the universities 1,037 posts are lying vacant.
Representational picture
Subhashish Mohanty   |   Bhubaneswar   |   Published 29.07.22, 02:32 AM

Assam police have arrested a madrasa teacher and detained 11 others in separate operations from four districts for their alleged link with the Colleges in Odisha are finding it tough to conduct classrooms following huge staff vacancies.

Though colleges across the state have opened and offline classes being held most of the institutions are forced to rely on the services of guest faculties for want of required teaching staff. Nearly 89,176 students are reading in the government and government aided colleges of the state.

According to the UGC norms, student and teacher ratio should be 10:1 at the post graduation level and 25:1 at the graduation level. “But we are far from conforming to the UGC norms. There are instances of departments in colleges being run by a single teacher. This is happening even in colleges at district headquarters and even in the state capital,” confided the principal of a reputed college.

Not only has an acute shortage of teaching staff hit college level education even post graduate studies in universities have suffered because of this. More than 60 per cent teaching posts and 70 per cent non teaching posts are lying vacant in colleges across the state, official sources said.

According to the official figures, out of the 2,338 sanctioned posts in the colleges affiliated to the universities 1,037 posts are lying vacant. Similarly, out of the 7,110 posts in the government aided colleges, more than half of the posts are lying vacant. “The state of affairs in the higher education department is abysmal. Teachers are overburdened. Lack of teachers has brought the standard down. If we analyse facts, all will be surprised to note that the number of students qualifying for the all India examination, particularly IAS, IPS has come down,” eminent educationist Dr Annapurna Sahu told The Telegraph.

“Almost all the universities at the PG level are struggling with the shortage of staff. Let us take the example of Kalahandi University, which has come into existence following the upgradation of the Bhawanipatna Degree College at Kalahandi to the University status. Out of the 112 teaching posts  91 are lying vacant,” said a senior official.

Similarly the post graduate departments of all the universities have been badly hit by the vacancies. “Though the guest faculty is doing a tremendous job, the paltry amount given to them has hit their morale and subsequently hit the education system itself. Most of the academic work is  being done with the help of guest faculty,” admitted a vice chancellor of a state-run university, , adding that they should be given adequate money. Now a guest faculty is paid only Rs 300 to Rs 500 for taking each class.

Contacted, Kalahandi University vice-chancellor Prof. Sanjay Kumar Satpathy told this newspaper, “We are managing the classes with the help of guest faculty. I am taking classes regularly. Whenever I find there is no teacher in a class I enter it even though the subject is not mine. I want to engage the students. The state government is aware of the issue and taking steps to fill up the posts.”

Odisha higher education minister Rohit Pujari said: “For filling up the posts in the government colleges, we are in touch with the Odisha Public Service and State Selection Board. Efforts are being made to fill up the posts.” (ABT) since Wednesday.

The ABT is a banned terror outfit based out of neighbouring Bangladesh with “affiliation” to the Al Qaida in Indian sub-continent (AQIS). Bangladesh had banned the ABT in 2015 and its offshoot Ansar al-Islam in 2017.

Mufti Mustafa, who used to run a madrasa and also taught at a nearby madrasa in central Assam’s Morigaon, was arrested on Wednesday.

Morigaon SP Aparna Natarajan told The Telegraph on Thursday that 32-year-old Mustafa was arrested from Sahariagaon and booked under various sections of the anti-terror law — the Unlawful Activities (Prevention) Amendment Act, 2019.

“We have found him linked to the ABT. We have found multiple financial transactions between him and ABT leaders and members since 2017. Once we get his remand we will be able to know more about his involvement. He has been booked under the UAPA. Few others are being questioned in connection with the case,” the police official said.

The police have also sealed the madrasa Mustafa was running, about 108km east of Guwahati. Set up in 2018, it has 45 students. The other madrasa where he taught is under surveillance.

Besides Mustafa, 11 other persons were also detained for their suspected link with the ABT in the crackdown since Wednesday. They hail from Barpeta, Guwahati and Goalpara and several electronic devices and incriminating documents have been “seized” from them, police said.

Special DGP (law and order) G.P. Singh said they were “connected to Islamic fundamentalism having linkages with global terror outfits such as the ABT and the AQIS”.

“Further investigation & operations are being carried out to unearth the linkages and network,” Singh said.

Barpeta SP Amitava Sinha told this newspaper on Thursday that four of the 11 persons detained by his team were picked up from Guwahati’s Hathigaon area.

“It was a simultaneous operation. We are still questioning them but they have been picked up for their link with the ABT,” he said.

This is the third major operation against fundamentalist forces by the Barpeta police under Sinha since March.

The Barpeta police had arrested five persons, including a Bangladeshi national illegally staying in the district, for their alleged nexus with the ABT which is trying to “develop” Barpeta district “as a base for Jehadi work and unlawful activities of Al-Qaida and its related organisation”. The arrested Bangladeshi was working as a teacher of Dhakaliapara Masjid in the district.

The NIA is probing the activities of the ABT module in the March arrest case.

The Barpeta police again arrested six persons in April for their alleged link with the ABT. They were allegedly trying to radicalise youth of the district on behalf of the ABT.

Assam chief minister Himanta Biswa Sarma said the arrest/detention was a “coordinated effort with help of national police agencies” and that the state police have been successful in busting two jehadi modules in Morigaon and Barpeta.

The arrest of a 24-year-old (Akhtar Hussain) from Assam in Bangalore for his suspected terror link seemed to have triggered the coordinated operation in Assam, sources said.