All government schools can be improved if states and Centre come together, says Arvind Kejriwal who joins chief minister Stalin to inaugurate the programme; 41 institutions to be covered to begin with 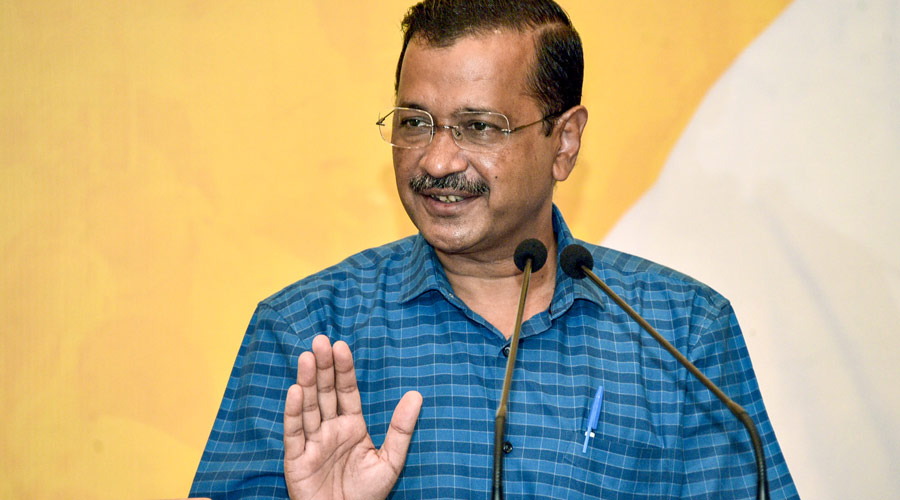 The Tamil Nadu government on Monday launched a model school scheme that is broadly based on  initiatives taken by the AAP government in Delhi where government schools have been transformed with upgraded infrastructure and improved learning opportunities.

Launching the Schools of Excellence and Model Schools Scheme here in the presence of his Tamil Nadu counterpart M.K. Stalin, Delhi Chief Minister Arvind Kejriwal said states should learn from each other on good practices transcending party politics and called for Centre-states cooperation to give fillip to the school education sector.

"If state and central governments came together," Kejriwal said, "within 5 years, all government schools in the country could provide best education to students." Though everyone wanted the country to become developed, he wondered if it was possible if 66 per cent children get "rotten education" in state-run schools.The Delhi CM inaugurated the scheme in an event held at the state-run Bharathi Women's College here.

As many as 26 Schools of Excellence and 15 Model Schools are covered under the TN government scheme, apparently in the initial phase. "Thagaisal Palligal" and "Mathiri Palligal" are the official Tamil names for the SoE and Model Schools.

Stalin launched the Moovalur Ramamirtham Ammayar memorial "Puthumai Penn (Modern Woman) "Scheme, under which a monthly financial assistance of Rs 1,000 would be provided to girl students pursuing higher education, who studied in government schools from classes 6-12.

In his address, Kejriwal said it is very important that state governments learn good work being done from each other. He said the 'Puthumai Penn' scheme would prove to be path breaking and revolutionary in the times to come not just for women of Tamil Nadu but for the whole country.

"This scheme incentivised education for girl students and also prevented early marriages, he said. About 66 per cent of students go to government schools across the country," he noted. Barring a few regions that witness initiatives to provide good education in the state sector like in Delhi, Tamil Nadu and other states, the condition of most other government schools across the country is "really pathetic," he said.

"Unless and until good education is made available on a par with private institutions, the dream of becoming a developed country would always remain distant," he said. "It is the right of every child to get free of cost and quality education and it should be the duty of every government to make it available. This should have happened in 1947 itself."

"During the past 75 years of independence, the requisite emphasis has not been provided for education, " he said..

Referring to initiatives to improve and upgrade quality of education in government schools in Delhi and Tamil Nadu, he batted for all state and central governments to join hands to provide excellent educational opportunities in state-run schools across the country.

If state and central governments came together, he said within 5 years all government schools in the country could provide best education to students.

Kejriwal said he was disheartened to learn some state government schools are closed down while in others, fees were being hiked.

In such a scenario, he asked if the poor man could afford to educate his children. "Also, it meant that almost two-thirds of children in the country would remain illiterate and consequently, the nation cannot progress."

It may be recalled that, reportedly, several government run primary schools were shut and a section of them merged, in Gujarat.

The Delhi Chief Minister lauded the launch of new educational schemes of the Tamil Nadu government on the Teachers Day. Recalling Stalin's April visit to government schools and Mohalla clinics in the national capital and the TN CM's resolve to replicate the SoE initiative, Kejriwal said he thought it may take 2-3 years for Tamil Nadu to emulate the Delhi model.

He said he was pleasantly surprised that Stalin had completed the task within 6 months.

In April, along with Kejriwal, Stalin had visited government schools in Delhi and praised the infrastructure in such institutions. He had then said his government would set up similar educational facilities in Tamil Nadu and invited Kejriwal for inauguration following completion of work.

The enrollment ratio of girl students from government schools in higher education is very low and the scheme's revamp was in recognition of that aspect.

Under the scheme, all girl students who studied from classes 6 to 12 in government schools would be paid Rs 1,000 per month directly into their bank account till the uninterrupted completion of their undergraduate degree, diploma and ITI courses.

The students would be eligible for this assistance in addition to other scholarships. Through this programme, approximately 6 lakh girl students could potentially benefit each year. For this new scheme, an amount of Rs 698 crore was allotted in the budget.