In the 120-year-old poem, a sage reminds a king of the inopportune time to have spent riches in building a temple in a year people were hit by a calamity 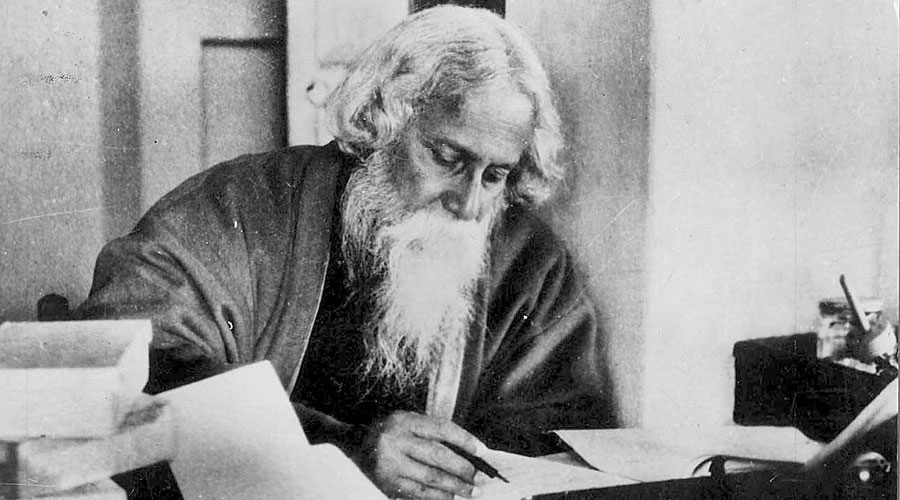 The clairvoyance of a 120-year-old Bengali poem by Rabindranath Tagore stunned many on a day Prime Minister Narendra Modi laid the foundation stone of the Ram temple in Ayodhya.

In the poem, Deeno Daan, a sage tells the king that the temple he has built with “two million gold coins” does not have god inside because it is full of “royal pride”.

The sage reminds the king it was inopportune to have spent the riches in building a temple in a year people hit by a calamity came begging at his door for help, “only to be turned away”.

With remarkable prescience that prophesied this year’s plight of the migrants and others in the aftermath of the lockdown, Tagore had written: “In the very year in which, twenty million of your subjects were struck by a terrible drought… pauperised masses without any food or shelter, came begging at your door crying for help, only to be turned away…. in that very year when you spent 2 million gold to build that grand temple….”

Tagore lovers from different corners of the world shared the poem on social media.

The poem crossed the language barrier, too, thanks to a Calcuttan who now lives in Delhi. The Facebook user translated “some excerpts” of the poem in English.

Banojyotsna Lahiri, a Presidency and JNU alumna, had been watching the “frenzy surrounding the Ram temple” since Wednesday morning.

“Give it a read. The sheer prophecy will send a shiver down your spine,” said one WhatsApp forward that shared the Facebook link of the English translation.

Lahiri had initially shared the original poem in Bengali on Wednesday.

“I found it extremely meaningful and topical. I saw the poem being shared by more and more people on social media. There are many non-Bengalis on my friend list. I thought they should also know the essence of the poem. I translated it in English and shared a second post in the afternoon,” Lahiri told The Telegraph over phone from her Garia home.

Deeno Daan is part of Kahini, an anthology of poems by Tagore written in 1900 (Bengali year 1307), said Biswajit Ray, associate professor of Bengali at Visva-Bharati.

Lahiri said the similarity with the present was “eerie”.

“The Covid-19 pandemic and the lockdown has had a similarly devastating effect with millions robbed of livelihood and crying for help. And here we have hundreds of crores being spent on a temple,” she said.

A section of social media users, Lahiri included, said the poem was written “exactly 120 years ago, on this very day”. They mentioned 20th of Shravan (Wednesday also turned out to be 20th of Shravan.)

Ray said in Tagore’s case, it was often difficult to put an exact date to a piece.

“The poem was written in 1307. But on many occasions, Tagore did not write the full date below a poem. Sometimes, he wrote the Bengali year after the English date,” he said.