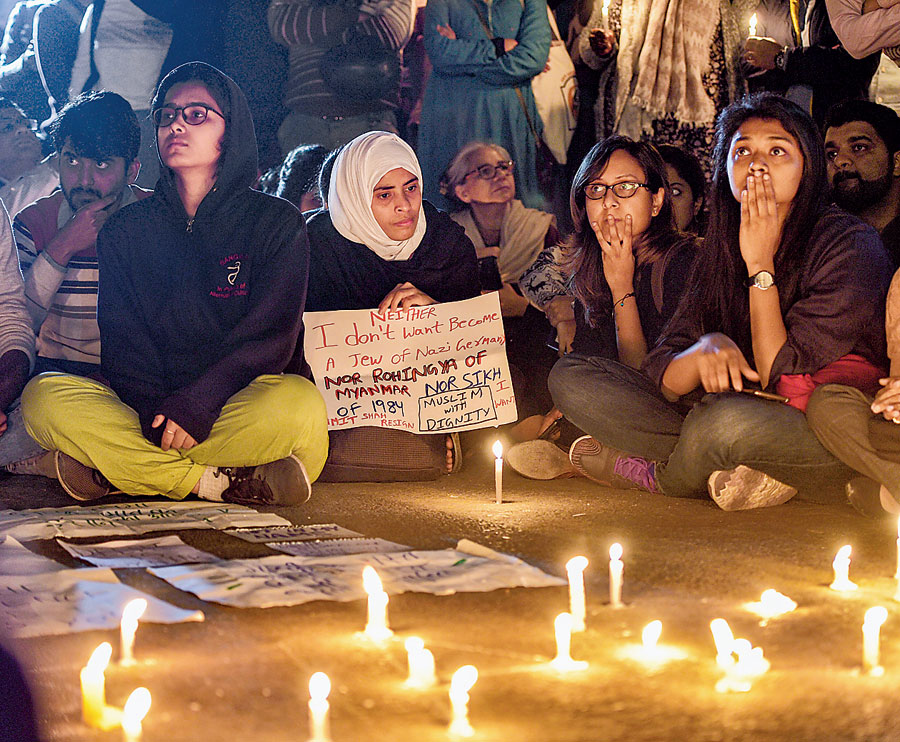 Delhi’s ruling Aam Aadmi Party, which found itself a bystander unable to check the riots that have raged in northeast Delhi since Sunday, tried to get its act together on Tuesday but appeared to be caged by its strategy.

The party’s assessment that playing down the violence would lead to a retreat by rioters has misfired, with the violence spreading further, and a section of the leadership has now demanded a more visible approach to counter rioters. However, AAP’s strategists have asked them to hold their horses.

After midnight on Monday, several MLAs and former MLAs led by minister Gopal Rai, who is also the party’s Delhi chief, turned up at Lieutenant Governor Anil Baijal’s residence to demand that police intensify their presence to stop the rioting. Baijal did not meet them.

After they had waited for two hours, special commissioner of police Rajesh Khurana assured them that lives and property would be protected.

An AAP source said: “We were drawing flak of inaction. We did not publicise the MLAs going to the LG, and they did go very late. It was a gesture so that minorities recognise that we are not politicking, and are doing something to protect them.”

On Tuesday morning, Kejriwal met the AAP legislature party. This was followed by an all-party meeting, prayers for peace march by party leaders at Rajghat and then visits to hospitals.

After the legislature party meeting, he told journalists: “The borders need to be sealed and preventive arrests of the miscreants need to be made. I have also directed the SDMs of the areas to take out a peace march along with the local police officials. Peace committees at the local

level must conduct meetings, inviting MLAs and members from all the religions and communities. The temples and mosques situated in the affected areas must also appeal to the people to maintain peace and calm.”

An AAP leader said Kejriwal’s playbook is influenced by a 2014 Yale University research paper, “Do Parties Matter for Ethnic Violence? Evidence From India”. The researchers had found that between 1962 and 2000, the Bharatiya Jana Sangh followed by the BJP “saw a 0.8 percentage point average increase in their vote share following a riot in the year prior to an election.”

The leader explained: “A riot is about Us versus Them. If any party takes the side of ‘them’, they will end up leaving the ‘us’ to the BJP... Speaking out against what is clearly a riot going on with complicity of the police will only generate political capital for the BJP, which will say we are anti-Hindu. Arvind’s assessment is that if political capital is not generated for the BJP, the riots will stop. But the problem is that they are getting wilder and deadlier.”

He added: “(MP) Sanjay (Singh) suggested that prominent upper caste leaders like himself, Durgesh Pathak and others could take out a peace march. The other option was a meeting of all party workers at Rajghat. Instead, Arvind opted for just a photo opportunity of senior leaders at Rajghat. Sanjay has been asked to lay low for a couple of days.”

A party functionary explained: “The army may be called eventually, but we don’t want to be the ones to call them and appear to escalate the situation. DMs are doing flag marches, and MLAs are present in them. Yes, the flip side is that we will feel frustrated at not being able to stop human rights violations. But any intervention without the police in our hands will not solve the problem either. The police are not even responding to calls of people who are complaining about rioting in their areas.”

The Delhi Fire Service has sought police protection as one of their vehicles has been burnt, and others stoned. Fire tenders could not be deployed when arsonists set the Gokulpuri tyre market ablaze last night. Northeast Delhi’s boundaries with Uttar Pradesh’s Ghaziabad district were finally sealed on Tuesday evening.