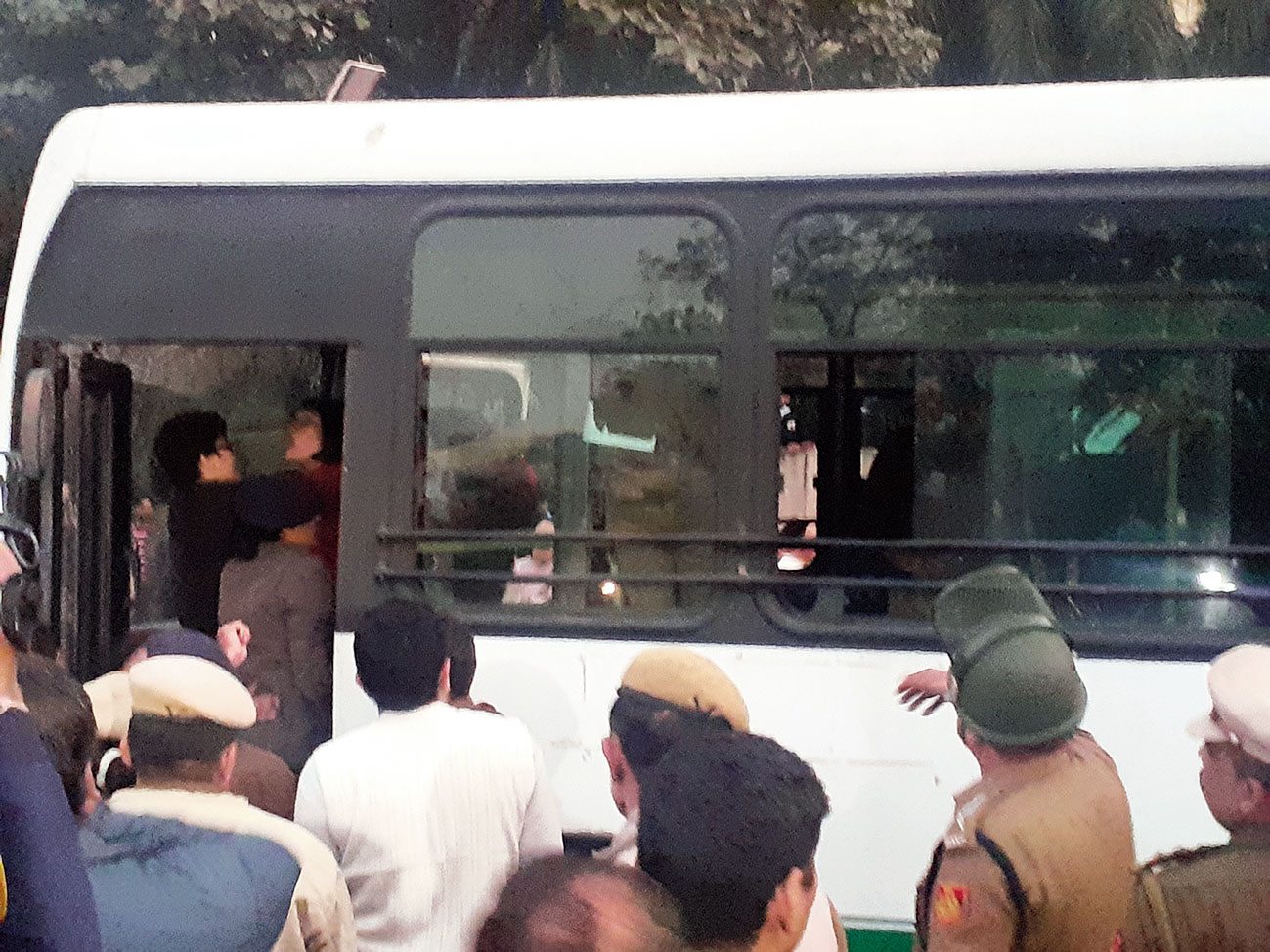 Dolan Samanta, an MPhil history scholar from Bengal, being virtually choked by a policewoman in black civvies (left) on the doorway of a bus in New Delhi on Monday. The Telegraph reporter saw the girl being slapped too.
Picture by Pheroze L Vincent
Pheroze L. Vincent   |   New Delhi   |   Published 09.12.19, 10:13 PM

A woman plainclothes officer squeezing a girl scholar by the throat and later flattening her face against a bus window as she slapped her were some of the images of police brutality from Monday’s JNU protest march.

True to its recent practice, the Delhi police thrashed and abused the young men and women, dragged them along the streets, kicked them with their boots and snatched their mobile phones, successfully breaking up the students’ second march against a hostel fee hike.

This reporter witnessed Dolan Samanta, an MPhil history scholar, being virtually put on a chokehold by a woman officer after being dragged into a bus along with many other protesters to be taken to a police station.

“I had asked the officers why they weren’t in uniform and where they were taking us,” Samanta later told The Telegraph. “This lady officer (wearing black-framed specs, a black jacket and a white T-shirt) caught me by the throat, dragged me to a seat and pressed my face against a window. She then slapped me twice. She did not say anything.”

As the bus drove off, Samanta was heard shouting: “There’s a patient here.”

That patient was Neha Tiwari, a student councillor at Ambedkar University who had joined the JNU march in solidarity and had fainted during the crackdown.

“Although the police said they would take her to hospital, they drove to Vasant Vihar police station first before dropping the students off at JNU,” Samanta said.

Tiwari had by then regained consciousness but was delirious. The students took her to the campus health centre.

Earlier, JNU student councillor Preeti Umarao had felt the brunt as groups of cops caned students, threw them to the ground and kicked them for a few seconds each at Bhikaji Cama Place.

“I was playing a tambourine (dafli) when four policemen standing near me pushed me to the ground and snatched the instrument,” she told this newspaper.

“They hit me with it and kicked me on my right side (below the ribs). I felt a blow from a boot on my left cheek too. Two CRPF men were standing there when this happened.”

She was rescued by Shreya Ghosh, a student member of JNU’s gender sensitisation committee against sexual harassment, who rushed towards the police with fellow students.

“When the police saw a group of students advancing, they left her and walked away. But a woman plainclothes officer kept hitting us with a sharp wooden plank,” Ghosh said.

Nivash Prakash, an MA political science student, was on Monday evening being treated at Safdarjung Hospital for injuries — from kicks to his genitals and elsewhere.

“I was dragged into a police jeep and brutally beaten inside and abused. I was kept at R.K. Puram police station for two hours before being released,” he said.

The students, protesting for the past six weeks against a steep hostel fee hike, were to march to Rashtrapati Bhavan to demand the intervention of President Ram Nath Kovind, who is also JNU’s Visitor.

At 11.30pm on Sunday, JNU students’ union president Aishe Ghosh had said she had received an email from the human resource development ministry joint secretary, Girish C. Hosur, calling elected student representatives to the ministry at 9am on Monday.

Ghosh replied to him this morning, requesting an appointment after the march and demanding that the ministry release the report submitted a fortnight ago by the committee it had formed to resolve the crisis.

On Monday, the students were allowed to leave the campus around 2pm and reached Bhikaji Cama Place, more than 5km away, around 4pm. Here, the police beatings began.

In the chaos, the march that was to continue into Africa Avenue, where the police had erected a barricade, was diverted left to the Ring Road. The students began a sit-in there while senior officers led by special commissioner Praveer Ranjan tried to persuade them to leave, only to be confronted with complaints of police brutality.

Tanushree Pandey of India Today TV was pushed aside by a woman constable as she attempted to ask Ranjan why a peaceful march was being disrupted violently.

An hour later, as the students tried to resume their march westwards towards Moti Bagh, the police pushed them southwards into Vivekananda Marg. Several students were beaten up and detained, including some who were dragged alone into police cars.

Here’s where Prakash and Samanta came under attack.

During the police crackdown, Aishe Ghosh had told this newspaper: “We don’t know what happened. We had spoken to the police and said we would march for some distance, and they had assured us that a delegation would then be allowed to go to Rashtrapati Bhavan. I don’t know why they are beating us.”

Later in the evening, the students tried to block Vivekananda Marg but dispersed when confronted by a large police contingent.

Several students said the police had tried to snatch their phones. Aafreen, an ethnography scholar, was still pleading with the police to return his mobile around 7pm at a spot beside the Hyatt Regency.

“The phone has photos of my fieldwork. I was recording what the police were doing. They became violent when I asked why so many of them were in plainclothes. A uniformed officer kicked me, snatched the phone from my hand and threw it away,” he told this newspaper.

Later at night, the police returned the phone.

Last month, the police had violently broken up the JNU students’ march to Parliament, the mayhem injuring many students, including the disabled, as well as teachers and journalists.

Last year, a police crackdown on a march against sexual harassment and seat cuts had witnessed a reporter being molested and a woman photojournalist being beaten and having her camera snatched.