Although the Indian Army officially denied that its soldiers used firearms, sources in the security establishment said shots were fired from both sides 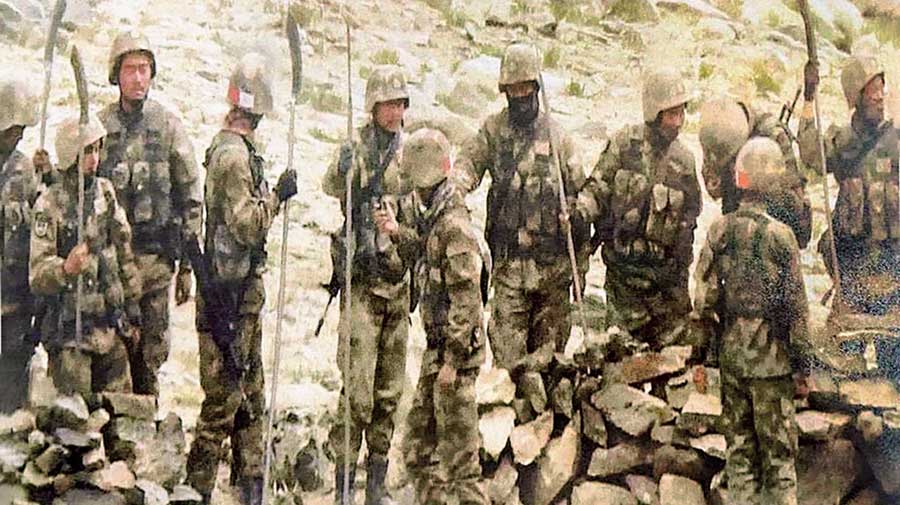 A photograph distributed by the news agency and credited to “government sources” shows Chinese soldiers carrying the Guandao (a heavy blade mounted atop a wooden or metal pole) as they “approached towards the Indian post near the Mukhpari peak at about 6pm on Monday”
Govt sources/PTI
Imran Ahmed Siddiqui, PTI   |   New Delhi   |   Published 09.09.20, 02:01 AM

Shots were fired for the first time in 45 years on the India-China border on Monday evening, escalating tensions in a Ladakh sector where 10,000 troops from either side are face to face amid arrays of tanks, artillery guns and missile systems.

The tit-for-tat disclosures — both sides accused the other of opening fire — came on the eve of a meeting in Moscow where the foreign ministers of India and China are scheduled to be present.

Although the Indian Army officially denied that its soldiers used firearms, sources in the security establishment said shots were fired from both sides.

“Our soldiers fired as a counter-measure to defend our territory as the Chinese troops attempted grab land. The firing took place near the Mukhpari peak near Rezang La,” a security official said.

Rezang La is the place where a company of 13 Kumaon Regiment, led by Major Shaitan Singh, had held back the Chinese PLA during the 1962 war.

The Indian sources said that besides the guandaos, the around 50-60 Chinese soldiers carried rods, spears and clubs and tried to close in on an Indian position on Mukhpari.

The Indian Army had issued an official statement earlier on Tuesday denying its troops had used firearms and alleging the Chinese had tried to “close in” on a forward position and “fired a few rounds in the air in an attempt to intimidate” Indian troops.

Late on Monday night, the People’s Liberation Army (PLA) of China had accused Indian troops of crossing the LAC near the Pangong Lake’s south bank and firing warning shots when Chinese troops arrived to negotiate with them.

On the 3,488km Line of Actual Control, neither side had fired shots since 1975. No firearms had been used by either side during the violent clash in the Galwan Valley on June 15 that killed 20 Indian soldiers and an unspecified number of Chinese troops.

“Monday’s firing violates protocols observed for more than 40 years by either side. It suggests the situation is extremely fragile and dangerous,” an Intelligence Bureau official said.

A longstanding protocol forbids the use of firearms on the un-demarcated LAC, which witnesses several face-offs and skirmishes every year, and advocates dialogue to resolve issues.

Military veteran Pravin Sawhney tweeted: “Absurd to state that shots were fired in air for warning in war zone as if the task was law & order to disperse civilian crowd. Something else is going on?”

Indian army sources said the standoff was continuing on Tuesday at Rezang La near the Mukhpari peak.

“The distance between the Indian and Chinese troops is approximately 150 to 200 metres. Local commanders are holding talks to defuse the tension,” an official said.

Harsh winter: China For the first time since the standoff began, China on Tuesday referred to the approaching winter and expressed hope that disengagement can be achieved as soon as possible through mutual consultations.

Asked about the restoration of the status quo by disengaging the troops, Chinese foreign ministry spokesperson Zhao Lijian told a media briefing in Beijing: “You have a good wish. We all hope our troops get back to their camping area and there won’t be any more confrontation in the border areas.”

He added: “You know that place has a very bad natural condition and it is above a height of 4,000 metres. In winter this is not good for humans to live. So we hope, through diplomatic and military channels and through consultations on the ground, we can achieve disengagement as soon as possible and reach consensus.”

In mountainous Ladakh, temperatures can plummet to minus 30 degrees Celsius in winter. Zhao’s reference to the harsh winter came amid suggestions that both sides were making arrangements for a long-drawn face-off, especially in the Pangong Lake area.

On Monday’s firing, the Indian Army said: “In the instant case on September 7, it was the PLA troops who were attempting to close in with one of our forward positions along the LAC and when dissuaded by own (Indian) troops, PLA troops fired a few rounds in the air in an attempt to intimidate own troops. However, despite the grave provocation, own troops exercised great restraint and behaved in a mature and responsible manner.”

The statement accused China of committing grave provocations on the ground while talking of peace at bilateral meetings.

“(While) India is committed to disengagement and de-escalating the situation on the LAC, China continues to undertake provocative activities to escalate. At no stage has the Indian Army transgressed across the LAC or resorted to use of any aggressive means, including firing,” the statement said.

“It is the PLA that has been blatantly violating agreements and carrying out aggressive manoeuvres, while engagement at military, diplomatic and political level is in progress.”

The Chinese army statement referred to the area of confrontation as “Shenpao mountain” near the lake’s south bank. India’s army termed the Chinese statement misleading but did not specify the site of the incident except for saying it was on the Indian side of the LAC.

“The Indian Army is committed to maintaining peace and tranquillity; however, (it) is also determined to protect national integrity and sovereignty at all costs. The statement by the (Chinese) Western Theatre Command is an attempt to mislead their domestic and international audience,” the army said.

The two armies have been locked in a standoff since early May at multiple friction points --- the north bank of the Pangong Lake, Hot Springs and Depsang Plains – where the Chinese have ensconced themselves well inside India-claimed lines and altered the status quo. A degree of disengagement has happened in the Galwan Valley, but the Chinese are understood to be still inside India-claimed territory there.