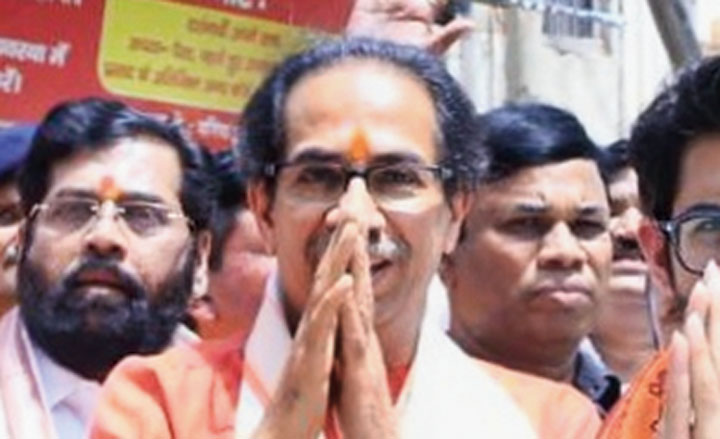 Shiv Sena chief Uddhav Thackeray visited Ayodhya on Sunday, asserted that the Narendra Modi government would soon build a Ram temple there and suggested this might be done through an ordinance.

“Modi has the confidence to bring an ordinance in the Lok Sabha for constructing the temple in Ayodhya. The Shiv Sena will support the government on this,” Uddhav, who prayed at the makeshift Ram temple with all his 18 Lok Sabha MPs, said.

It wasn’t clear what he meant by “bring an ordinance in the Lok Sabha”, for ordinances can be promulgated only when Parliament is not in session. They must, however, be ratified by Parliament within six weeks of the start of a session.

The Ayodhya land dispute is now before the Supreme Court, and a host of Sangh parivar leaders had before the general election urged the government to issue an ordinance to clear the decks for the temple’s construction. But Modi had in a pre-election interview said he would wait for a court verdict.

Uddhav, who had come to the makeshift shrine to thank Ram for his party’s success in the general election, was reminded how during a previous visit he had claimed the temple promise by the BJP was a jumla (figure of speech).

“We have extended support to the BJP on the condition of building the temple during Modi’s current tenure,” he replied. “There is a majority government at the Centre and the process for temple-building will be started soon.”

He added: “The Parliament session starts from Monday and we are here to take Ram’s blessings, hoping the temple would soon be built here.”

On a visit to Ayodhya on November 25 last year, Uddhav had said: “The BJP has accepted that its 2014 campaign promise of transferring Rs 15 lakh to every Indian’s bank account was a jumla. I want to suggest that they accept that their promise of a Ram temple too was a jumla.”

A pesky Sena was at the time losing no opportunity to bait its bigger ally. But on Sunday, Uddhav said: “The Narendra Modi government is strengthening Hindus. The Hindu community of the country is getting united and that’s a good sign.”

Iqbal Ansari, a member of the Sunni Central Waqf Board, a party in the court case, dismissed Uddhav’s claims.

“Thackeray has no devotion to God. His visit is clearly politically motivated,” Ansari said. “While Modi had said before the elections that he would prefer to wait for the court verdict, the Sena is trying to confuse people by claiming an ordinance would be brought in.”

Ansari added: “Visiting Ayodhya and offering prayers in temples is good but being here with all his MPs and speaking on a case pending in the Supreme Court is pure politics. They are ridiculing the god as well as the law of the land.”

Uddhav claimed his party members had led the mob that demolished the Babri Masjid on December 6, 1992, and they would be the first to start building the Ram temple.

Since the Sena has hardly any following in Uttar Pradesh, all its Lok Sabha MPs had arrived in Ayodhya from Maharashtra on Saturday to make arrangements for a ceremony to welcome Uddhav, who arrived on Sunday morning with his family.