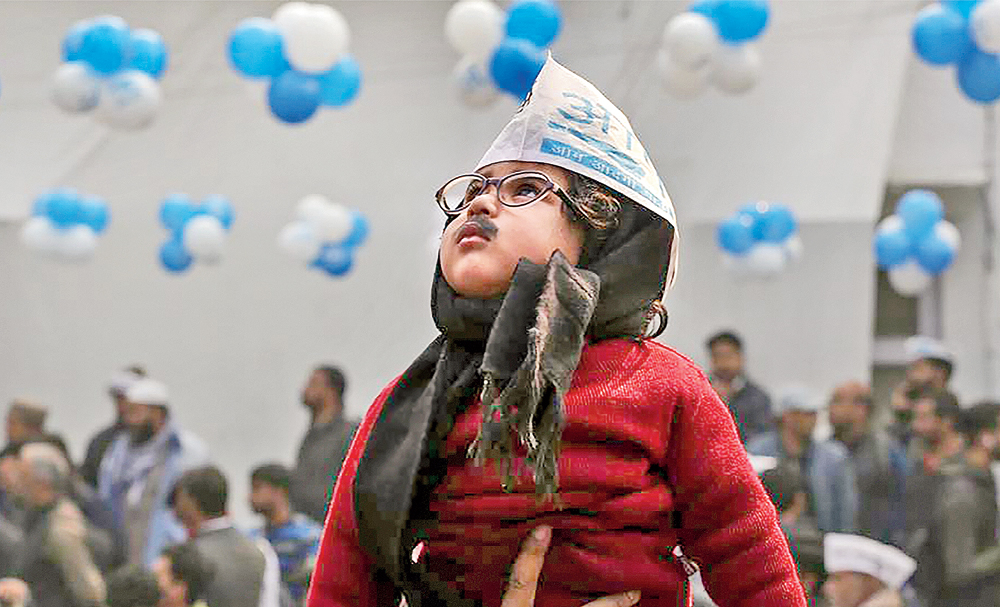 Amit Shah, who had called on Delhi’s voters to press the voting machine button so hard that the electric shock was felt in Shaheen Bagh, was not seen or heard till Tuesday midnight — after the BJP suffered yet another humiliating election defeat.

Prime Minister Narendra Modi, who too had tried to demonise the protesters of Shaheen Bagh, put out a tweet around 6.30pm: “Congratulations to AAP and Shri @ArvindKejriwal Ji for the victory in the Delhi Assembly Elections. Wishing them the very best in fulfilling the aspirations of the people of Delhi.”

The worst of hate slogans — “desh ke gaddaron ko, goli maaro…” was chanted by none less than a Union minister — could not take the BJP’s tally to a double-digit figure, with the party winning only 8 of the 70 seats.

This comes close on the heels of the defeat in Jharkhand and, before that, the loss of power in Maharashtra. Earlier, the party had lost the Rajasthan, Madhya Pradesh and Chhattisgarh elections.

In Delhi, the BJP could only take solace from the rise in its tally by 5 seats and an over 6 per cent jump in vote share over 2015.

The BJP’s campaign was built around slogans and phrases such as “desh ke gaddaron ko, goli maaro…”, “tukde-tukde gang”, “anti-nationals”, “terrorists” and “speaking the language of Pakistan” and projected the election as a battle between “India and Pakistan”. The party’s ministers and leaders urged voters to teach a lesson to the Shaheen Bagh protesters, who are mostly Muslim women.

To unleash this hate campaign and conquer Delhi, the might of the saffron army of Union ministers, chief ministers, state ministers, some 240 MPs and hundreds of foot soldiers of party workers from across the country was deployed in the small capital state. Ally Nitish Kumar from Bihar was also pressed into service.

This army was led from the front by Shah, who his supporters revere as “Chanakya” and new “Iron Man of India”, fully aided by Prime Minister Modi.

Shah seized the Shaheen Bagh protest as a weapon to polarise voters. He addressed over 30 campaign meetings in the lanes and by-lanes of Delhi and undertook eight road shows, becoming the party’s face of the election and trying to prove that he could single-handedly snatch victory from the jaws of defeat.

Shah started by asking the electorate to press the lotus button on the electronic voting machine so hard on polling day that it sends a current to Shaheen Bagh and forces the protesters to flee. In meeting after meeting, he kept bringing up Shaheen Bagh and asking voters to choose between the “anti-national toli” (group) of “Rahul Baba and Kejriwal” who stand with the anti-CAA protesters and “deshbhakt” (patriot) Modi and the BJP.

Following in his path, ministers and chief ministers went further with a hate campaign.

Modi addressed only two big rallies, apart from one before the election dates were announced, but he too sought to play on Shaheen Bagh. “Whether at Seelampur or Jamia or Shaheen Bagh, the demonstrations are not a mere coincidence but an experiment,” Modi said, asking people to use the power of their votes to end the “anarchy”.

The results on Tuesday showed that Delhi’s voters rejected the call of the BJP’s two top leaders, sending a shockwave through the party.

Only last year in the Lok Sabh elections, the BJP had won in 65 Assembly segments. Shah’s aggression was part of an effort to hold onto at least a winning chunk of the Lok Sabha electorate.

After a fresh membership drive, the BJP claims to have over 62 lakh members in Delhi. But the party has won just over 35.5 lakh votes.

Internally, however, the party appeared in no mood to show any signs of conciliation. “We don’t take this result as a mandate against the CAA. It’s simply victory of Kejriwal’s freebie politics,” one senior BJP leader said. “Our aggression over CAA will continue,” the leader added.

The party leadership also feels the polarisation had worked, though not to the desired extent. “We have managed to sway some 10 lakh voters. Opinion polls were giving us just 26 per cent vote share and we have got over 38 per cent,” another BJP leader said.