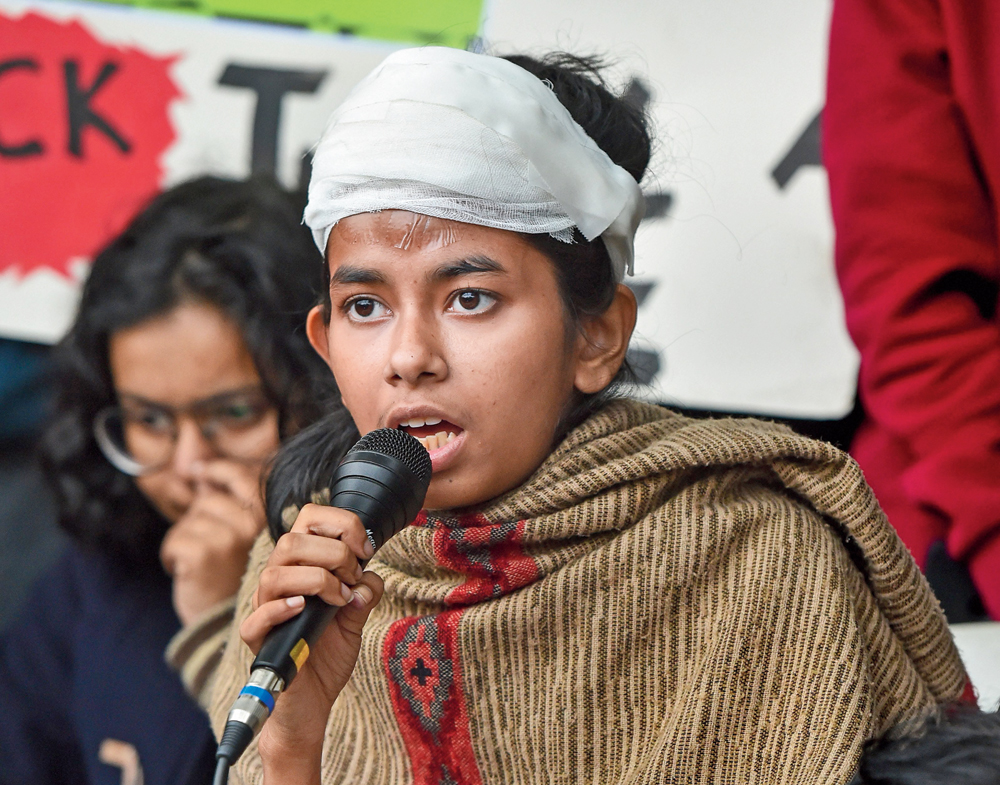 An injured Aishe Ghosh, JNU students’ union president, addresses a media conference on the campus on Monday after returning from hospital. A lump the size of a lemon was clearly visible on her forehead
(PTI photo)
Pheroze L. Vincent   |   New Delhi   |   Published 07.01.20, 03:34 AM

Accounts from the Jawaharlal Nehru University (JNU) campus on Monday suggested a systematic attempt on Sunday night at targeting or sparing students after marking out their rooms on the basis of ideological belief and religion, recalling a Nazi-era policy of segregation and persecution.

Surya Prakash, a visually impaired MPhil scholar of Sanskrit, has a swollen left arm from the beatings with steel rods he received during Sunday’s attack on the JNU campus, attributed to ABVP-led assailants.

The reason he was attacked, Prakash says, was the image of B.R. Ambedkar on the door of his hostel room.

“I only moved in here in August. The previous resident had painted Ambedkar on his door. I was studying in my room around 6.45pm, wearing earphones, when the glass of the skylight above my door came crashing and shards fell on my head,” he said.

“They managed to open the latch (through the broken skylight) and barged in. From the noise, it seemed like 15 to 20 people. They used cuss words and began to hit me with rods on my arms and back until they realised I was blind.”

Prakash received several calls on Monday from unknown people who said he had been targeted by mistake and should not appear on TV.

On Sunday, the attackers had given his room the same treatment that was given to virtually all the other rooms whose doors sported posters or slogans linked to political organisations opposed to the ABVP, the RSS student arm.

In contrast, the attackers passed over those rooms at Sabarmati Hostel — the worst hit — that displayed ABVP stickers or images of Hindu deities. The Nazis had done it the other way round, forcing their potential victims — the Jews — to wear badges to tell them apart from the others.

The ABVP is at loggerheads with the Left-led students’ union, which is agitating against a hostel fee hike. The violence took place on the last day for students to register for the upcoming semester, a process the students’ union had decided to boycott until the fee hike was rolled back. Groups of masked youths went on the rampage on Sunday, assaulting students and teachers who support the students’ union.

Several were treated at the AIIMS, including students’ union president Aishe Ghosh and geography professor Sucharita Sen who suffered severe lacerations on their heads.

Room 156, where a Kashmiri PhD student stays, was the worst affected: it was smeared with the contents of a fire extinguisher and left strewn with broken belongings and shards of glass.

“Faced with a hail of stones, several students had rushed into the hostel. Five of us were in my room when the attackers came and started breaking the glass and knocking the door down,” the boarder said, declining to give his name.

The boarded added: “Some of my friends jumped off the (first-floor) balcony. I climbed onto the balcony next door…. They have smashed every room that has a Muslim resident, besides those of student leaders. I am a Kashmiri, so I guess I deserved the worst.” 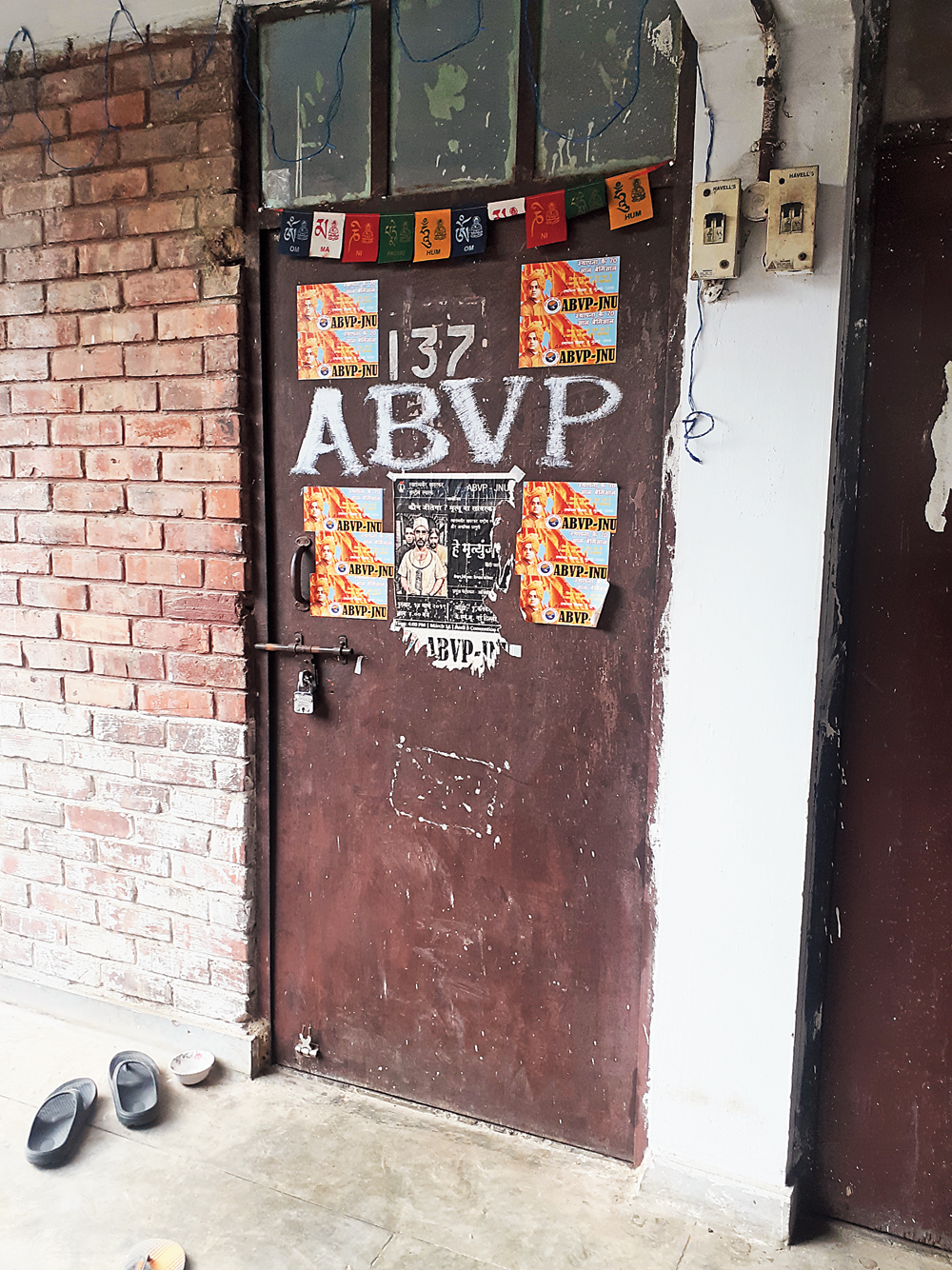 A hostel room with “ABVP” stickers on the door
Picture by Pheroze L. Vincent

Lalit Pandey, JNU student and central universities convener of the ABVP, said at a news conference: “In the Periyar and Kaveri hostels, the rooms of ABVP cadre were vandalised…. Aishe Ghosh led the mob of masked goons.”

Geography professor Bikramaditya Choudhary hadn’t slept, either, after his wife was chased by the attackers on Sunday night.

“I called the police, the chief security officer, the registrar…. I made some 50 calls in a span of 40 minutes after the mob chased my wife and began banging on the doors of the New Transit Hostel (NTH). Not a single call or message received a response,” he said.

“I went to the security office at the North Gate at 1am and tried to complain. None of the guards took my complaint. I asked for their duty register and found that the name of the duty officer had been left blank for the shift. The guards were not named in the register, either, so no one can be held accountable.”

After Choudhary’s wife was chased when she stepped out for a walk at 7.15pm, the attackers banged on the doors of the 25-odd teachers staying at NTH. The only one to open the door was the son of Korean teacher Myunge Lee.

“We watched them through our window, and we think they saw us and came upstairs. I am very scared,” Myunge Lee said.

A masked man entered and searched the home. One of them told the teacher “I know you” before leaving.

Outside, all around the campus, Sangh parivar groups chanted slogans on Monday demanding the burial of communists and traitors.

“The administration under this vice-chancellor cannot probe this as they are a party to this. The police allowed this to happen,” JNU Teachers Association secretary Surajit Mazumdar said. “We demand a judicial probe or a court-monitored probe and the resignation of the VC.”

The teachers have accused the vice-chancellor, M. Jagadesh Kumar, of engineering the attack.