Scandal in school shakes up Delhi 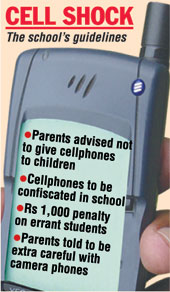 New Delhi, Nov. 26: Sex may not exactly be new in posh Delhi schools. Now there?s sex and the cellphone.

Two Class XI students had sex on their school premises and shot it with a mobile phone enabled with multimedia messaging service, or MMS.

Parents and teachers were shocked by news of the incident, but for the past month, a video of three to four minutes? duration has been the most widely known secret at Delhi Public School, R.K. Puram.

?I really feel sad for the girl. Maybe she was drunk or doped when it was happening. Or maybe she just got into bad company,? said a student.

The video is said to have explicit footage of the two students ? they should be 17 years of age ? engaging in sex. The girl?s face is reportedly visible in the clip that has been circulating among students, passing from one MMS-enabled equipment ? camera phone in popular parlance ? to another. Some are believed to have downloaded the video from some Internet sites.

Principal Shyama Chona was not available for comment, despite repeated attempts. Yesterday, she had told a TV channel that ?disciplinary action had been initiated?.

Both students come from affluent backgrounds ? the boy is from a business family and the girl?s father is said to be in the services.

The school has put up a notice warning parents and students against bringing mobile phones. Anyone caught with a cellphone on the premises will face confiscation and a Rs 1,000 penalty.

It is not clear what disciplinary action has been taken against the two students.

A shocked Springdales School principal and National Progressive Schools chairperson, Jyoti Bose, said society, including parents, has to confront the question of sex in schools.

?There is a larger issue about the content of the MMS. Though we haven?t discussed it in our meetings but after this incident, I think it has to be addressed,? she said.

Once the incident came to light, separate lunch breaks have been started at DPS RK Puram ? one for students of Classes XI and XII and another for the rest of the school ? so that the authorities can keep a close eye on their wards.

It may, however, be too late to insulate the rest of the school from the scandal as the authorities were the last to find out.

A student of the school said: ?It is not as if these incidents don?t happen in other schools. Just because of what one person did all of us are being branded. I think what my mother said when she heard about it sums it all up. She told me that I should change my school.?

The statement merely confirms the fact that sex does take place in Delhi?s schools ? and if it?s happening in the capital, there?s no reason to believe other cities are immune ? in which case changing schools will not help.

Bose said: ?We do not allow students below Class XI to bring mobile phones to school. Those who bring cannot use it on the school premises. I can understand the parents? paranoia about their children, particularly as they have to use DTC (Delhi Transport Corporation) buses to get home.?

Worried and well-off parents have given their children cellphones ? to make contact in an emergency. But then they also send their children to school for a purpose other than sex.