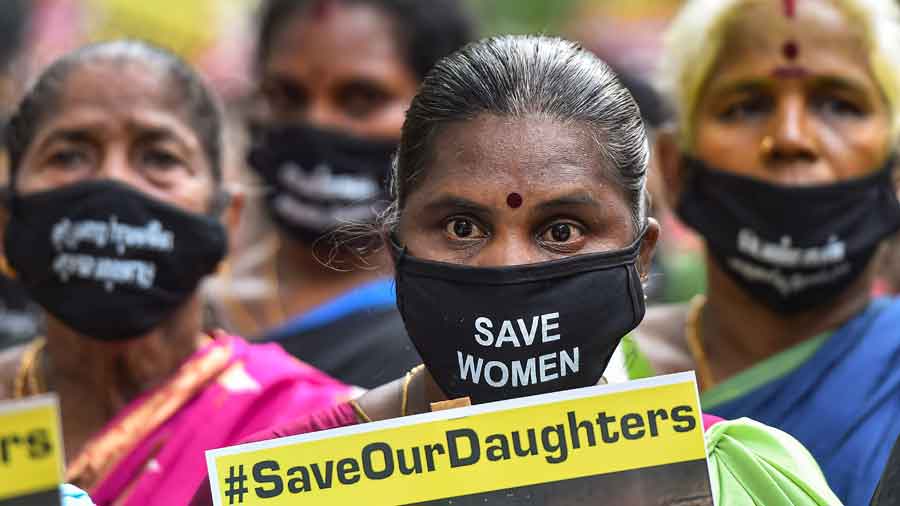 The victim's family has allegedly faced harassment at the hands of the administration and sections of locals
File picture
Basant Kumar Mohanty   |   New Delhi   |   Published 23.11.20, 02:15 AM

The parliamentary committee on the welfare of Scheduled Castes and Scheduled Tribes has rejected a request by some of its members to visit the family of the Dalit teen who was allegedly gang-raped and murdered by upper caste men in Uttar Pradesh’s Hathras district.

Although the girl passed away on September 29, a week after being brutalised, the 30-member committee headed by BJP leader Kirit Premjibhai Solanki has no plans of visiting the family, which has allegedly faced harassment at the hands of the administration and sections of locals.

The committee had met on October 20 to discuss representation of SC/ST employees at Delhi University when some of the members requested the chairman to allow a visit to the Hathras family. Solanki, however, rejected the proposal, committee sources said.

“When the request was made to visit the victim’s family, the chairman did not agree. He said the Speaker would not agree to such a trip. He also said that a visit to the victim’s family was under the jurisdiction of the National Commission for Scheduled Castes (NCSC),” a panel source said.

According to the source, the parliamentary committee has the power to tour any place to protect the interests of SCs and STs. The source said the Hathras incident was a fit case for a visit to inspect if the family was safe.

“People from the dominant community are openly giving threats. A visit by the committee would have sent a message to the police administration and helped the family in terms of safety and protection,” the source said.

Solanki told The Telegraph on Tuesday: “There is no plan to visit Hathras.” No further questions could be asked as he hung up.

Another committee source said that while one member had raised the Hathras issue and suggested a visit, two others had supported the proposal. Sixteen members, including the chairman, were present at the meeting.

The second source said the NCSC could not undertake a visit as the commission currently had no member. The government has not appointed anyone to the NCSC in the past five months.

Ambedkarite scholars said parliamentarians elected from reserved seats were not truly representing the community. The scholars supported the idea of separate electorates that Bhimrao Ambedkar had proposed 90 years ago, before accepting political reservation in constituencies. Currently, 131 Lok Sabha seats are reserved for SCs and STs.

Tanoj Meshram, a former civil servant and currently a PhD student of social policy at Heller School for Social Policy and Management at Brandeis University in the US, said caste atrocities were yet to feature on the political agenda of parties, suggesting that mainstream political forces were not committed to the ideology of social justice as envisaged in the Constitution.

“Unfortunately, most of the individual SC candidates contesting on the tickets and strength of mainstream political parties show little commitment to social justice,” Meshram said, adding that a separate electorate for SCs would have produced leaders with commitment to the cause of the community.

“MPs and MLAs winning from seats reserved for SCs are not truly representing the community. If there had been a separate electorate for depressed classes that Ambedkar had wanted, the Dalit and tribal communities would have got 131 committed parliamentarians in the Lok Sabha. The government cannot afford to have an indifferent attitude toward these communities,” Meshram said.

Under separate electorates, SCs and STs would have elected their own representatives from pre-identified constituencies. Such a process could have neutralised the influence of upper caste Hindus who constitute the majority in a parliamentary or Assembly seat.

This is contrary to the current system of reserved seats where SC or ST candidates fight elections and people from all communities exercise their franchise together.

Mahatma Gandhi had opposed the idea of a separate electorate for depressed classes as he saw it as an attempt to divide the Hindu society along caste lines and considered it against Indian nationalism.

Dr Sanjay Jadhav, a Nashik-based medical surgeon and Ambedkarite scholar, said that when Ambedkar was leading a movement for depressed classes, Gandhi and the Congress had foisted rebel untouchable sub-castes to create an alternative leadership.

Jadhav said the indifferent attitude towards SCs and STs cut across party lines. The Janata Party had in 1977 made Jagjivan Ram, a Dalit, their prime ministerial candidate but gone with Moraji Desai after winning the election, Jadhav pointed out.

“Dalits are never given respect or the positions they deserve. The indifferent attitude is across parties,” Jadhav said.

Kappan: wife has a question