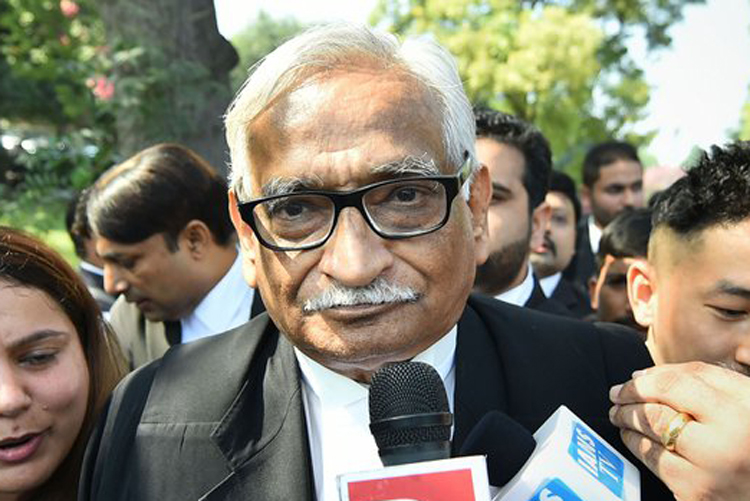 Senior advocate Rajeev Dhavan, known for his grasp of constitutional law and spirited arguments in favour of Muslims in the Ayodhya land case, does not feature in the review petition filed in the Supreme Court on Monday by one of the main litigants, Maulana Syed Ashhad Rashidi.

Dhavan on Tuesday termed his removal from the case as “a sacking” but wished the petitioner “all the best for your future endeavours”.

The All India Muslim Personal Law Board (AIMPLB), which is in the process of filing a review petition, has backed the veteran lawyer, saying he would continue to be its counsel.

On November 9, through a unanimous judgment, a five-judge constitution bench had allotted the disputed 2.77 acres to Hindus and a five-acre plot elsewhere in Ayodhya to Muslims.

Technically, an advocate is not an employee of the client but Dhavan feels his removal from the case was an instance of “sacking”.

Dhavan had often crossed swords in the Supreme Court with other senior advocates like K. Parasaran, C.S. Vaidyanathan and others representing the Hindu groups during the 40-day marathon hearing that culminated in the November 9 judgment. He had earlier claimed threats to his life by some Hindu elements.

Dhavan said in his letter to Maqbool: “As promised, I am responding to your call at 10.14am today, when I was at the doctor’s, informing me that I have been ‘sacked’ from further involvement in the Babri case on behalf of your client. We were in agreement that the correct term was ‘sacked’ and you explained you had no choice in the matter.

“With humility and respect…, I accept the sacking without demur.

“Over the draft of the review, you (Maqbool), Akriti and Qurratulain (other advocates) met me on 25 and 30 November, 2019. Meanwhile, Mr Jilani (Zafaryab Jilani, advocate and secretary of the AIMPLB) and others met me desirous of meeting further to discuss ‘our’ draft which you would send to them. After the meeting with Mr Jilani’s group…, you informed me that you wanted to file independent of the Jilani group.

“Since I had appeared for M. Siddiq (Rashidi is the legal heir to M. Siddiq, one of the original litigants to the dispute), I informed Mr Jilani accordingly and indicated that these matters must be sorted out by our clients and briefing lawyers.

“On 1 December 2019, Akriti and Qurratulain met me and we all but settled the draft of the review and were to meet today to finalise some details. Your call today initiated and confirmed my sacking. I wish you all the best for your future endeavours,” Dhavan said, adding “the cause is bigger than all of us”.

A copy of the letter was marked to Jilani, too.

The Telegraph tried to seek Maqbool’s views on the issue but phone calls and text messaged did not elicit a response till Tuesday evening.

Md Wali Rahmani, general secretary of the AIMPLB, lauded the contribution of Dhavan in protecting secular values and asserted that Dhavan would continue to be its lawyer in the review petition to be filed shortly.

Stating that Dhavan’s contribution to the Muslim community on Ayodhya has been “outstanding”, the AIMPLB said: “The way he argued the Babri Masjid/Ramjanam Bhumi title suit in the Supreme Court is excellent and praiseworthy. He was abused by a small section of the people and a filthy campaign was carried out in social media but nothing could deter him from arguing the case.”

Rahmani said prominent lawyers led by senior advocate Yusuf H. Muchala are busy drafting the review petition which will be “settled” (vetted) by Dhavan before being submitted in the apex court.