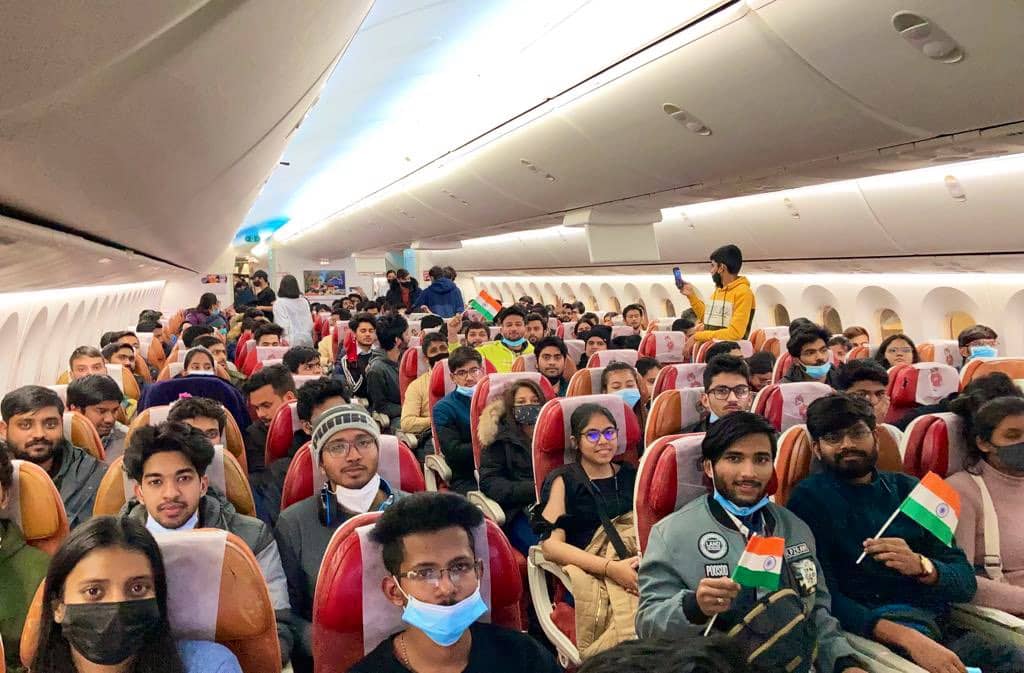 Air India's two evacuation flights, one from Romanian capital Bucharest and another from Hungarian capital Budapest, carrying 490 Indian nationals who were stranded in Ukraine landed at the Delhi airport on Sunday morning, government officials said.

India on Saturday began the evacuation of its stranded citizens amid the Russian military offensive in Ukraine, with the first evacuation flight, AI1944, bringing back 219 people from Bucharest to Mumbai in the evening.

The second evacuation flight, AI1942, departed from Bucharest with 250 Indian citizens and landed at the Delhi airport around 2.45 am on Sunday, the officials said.

Air India's third evacuation flight, AI1940, departed from Budapest with 240 Indian nationals and landed at the Delhi airport around 9.20 am on Sunday, the officials noted.

An Air India spokesperson said the airline's fourth evacuation flight is expected to come from Bucharest to Delhi with evacuees on Sunday afternoon.

The spokesperson said the carrier plans to send two more planes to Bucharest and Budapest on Sunday so that they can operate fifth and sixth evacuation flights but it is "all highly tentative".

Early this morning, Civil Aviation Minister Jyotiraditya Scindia welcomed the evacuees of AI1942 flight at the Delhi airport by handing out roses to them.

The Ukrainian airspace has been closed for civil aircraft operations since February 24 morning when the Russian military offensive began. Therefore, the Indian evacuation flights are operating out of Bucharest and Budapest.

Indian nationals, who reached the Ukraine-Romania border and Ukraine-Hungary border, were taken to Bucharest and Budapest, respectively, by road with the assistance of Indian government officials so that they could be evacuated in these Air India flights.

Scindia told the passengers of AI1942 flight that Prime Minister Narendra Modi is in touch with Ukrainian President Volodymyr Zelenskyy and talks are being held so that everyone is brought home safely.

The minister said talks are also on with the Russian government and the Indian government will breathe easy only after each and every stranded Indian is evacuated from Ukraine.

"So, please pass on this message to all your friends and all your colleagues that we are with them and we will guarantee their safe passage back," Scindia said.

"I welcome you all on behalf of Prime Minister Narendra Modi. I would like to congratulate the team of Air India too, for putting in so much effort to bring you all back," he added.

The government is not charging the rescued citizens for the evacuation flights.

Scindia told reporters at the airport terminal that approximately 13,000 Indians are stranded in Ukraine as of now.

"You know it is an extremely sensitive situation there (Ukraine). In this situation, we are talking with each Indian national, including students, through telecommunications," he said.

"We will bring them back as soon as possible," he said.

Air India shared on Twitter photos of Scindia receiving the evacuees at the airport.

"Aviation Minister Jyotiraditya Scindia receiving the Indian nationals who were flown back to Delhi from Bucharest by AI 1942 on February 27 early morning, operated to evacuate Indians stranded at war-ravaged Ukraine," the airline said.

The Indian Embassy in Ukraine said on Twitter on Saturday that Indian citizens in Ukraine should not move to any of the border posts without prior coordination with the Indian government officials there using helpline numbers.

"The situation at various border checkpoints is sensitive and the Embassy is working continuously with our Embassies in our neighbouring countries for coordinated evacuation of our citizens," it mentioned.

The Indian Embassy in Ukraine said it is finding it increasingly difficult to help the crossing of those Indian nationals who are reaching border checkpoints without prior intimation.

It said that staying in western cities of Ukraine with access to water, food, accommodation and basic amenities is relatively safer and advisable compared to reaching border checkpoints without being fully abreast of the situation.

"All those currently in the eastern sector are requested to continue to remain in their current places of residence until further instructions, maintain calm, and stay indoors or in shelters as much as possible, with whatever food, water and amenities available and remain patient," it said.