K.T. Rameez, caught trying to smuggle in unassembled rifles a few months ago, fifth suspect detained in the case 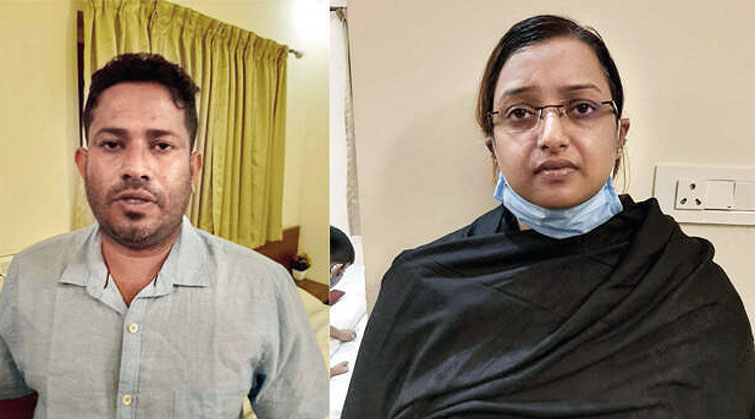 A fresh suspect was detained on Saturday night for questioning in the Kerala gold-smuggling case, hours after prime accused Swapna Suresh and Sandeep Nair were arrested from a Bangalore hotel.

Malappuram resident K.T. Rameez is the fifth suspect in the case apart from the four mentioned in the FIR: Swapna, Sandeep, P.S. Sarith and Fazil Fareed.

Sources said Rameez had a few months ago been caught at Kochi airport trying to smuggle in six unassembled rifles from the Gulf. He had claimed the arms were meant for a rifle club in Palakkad, and has been booked in a case.

Customs officials at Thiruvananthapuram airport had on July 5 found 30kg of gold being smuggled inside diplomatic baggage addressed to the charge d’affaires at the UAE consulate in the Kerala capital.

Sarith, who had come to the airport to collect the bag, was the first to be arrested after the UAE diplomat disowned the contraband.

Sarith used to be a public relations officer at the UAE consulate in Thiruvananthapuram, where Swapna was an executive secretary to the consul-general. They were reportedly sacked late last year but are said to have remained in touch with consulate officials.

Swapna was later fired as operations manager at the Space Park in Thiruvananthapuram after the smuggling case was reported on July 6. Sarith is believed to be jobless.

The National Investigation Agency has traced the remaining suspect, Fareed, to Dubai where he is said to own a gym and a luxury car workshop.

A native of Kodungallur in Thrissur district, Fareed has been living in Dubai for several years with his wife, child and mother. His father died recently.

Fareed had switched off his known phone number since the case was reported. Sources said that customs officials had managed to speak to him through his close friends in Dubai but he was unwilling to cooperate with the investigation, saying he had no idea about the racket.

The NIA might seek UAE authorities’ help to deport him, the sources said.

They added that Sarith was cooperating and that his testimony had helped the investigators zero in on the other suspects.

Swapna and Sandeep had sneaked out of Kerala soon after the case was reported. Around 4am on Sunday, NIA officers set off with them from Bangalore, arriving in Kochi around 3pm.

In between, they spent an hour at a government hospital in Aluva where the suspects underwent Covid-19 tests.

The motorcade’s arrival in Kerala, around 7.30am via Walayar in Palakkad, kicked off a spectacle with television channels covering the rest of its journey.

Congress and BJP protesters lined up at almost all the main intersections along the national highway, chanting slogans against the Left government and chief minister Pinarayi Vijayan and waving flags.

The NIA special court judge agreed to hear the case on a Sunday and remanded the duo to three days’ judicial custody. They were taken to a Covid-19 care centre in Thrissur meant for suspects, undertrials and convicts.

If the duo test negative, the prosecution is expected to approach the court on Monday to seek NIA custody for them.