Researchers explain why VVPAT tally plan is not fool-proof 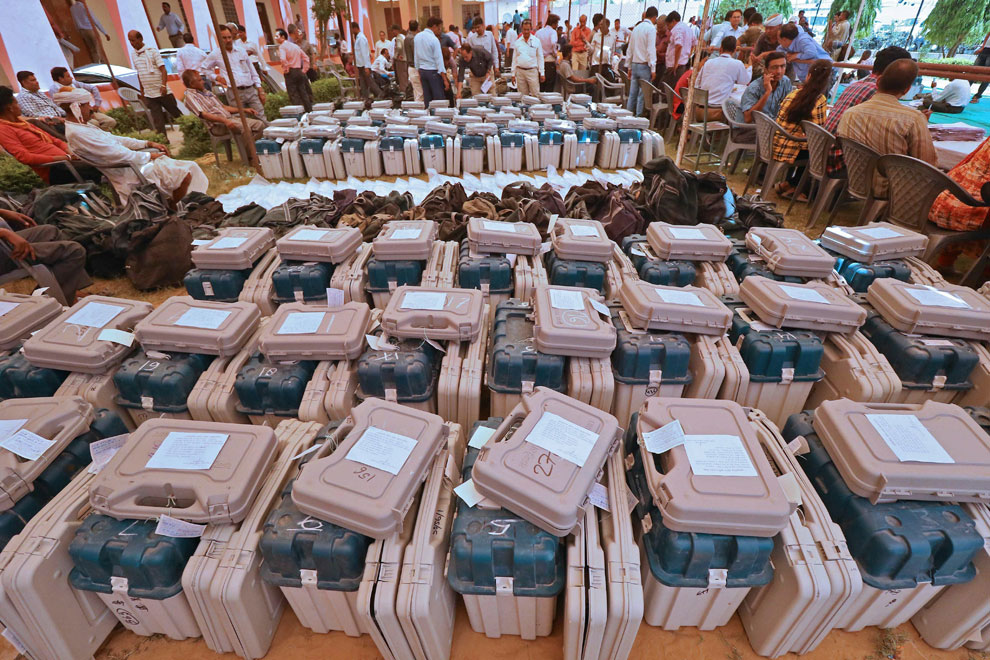 The plan to tally paper slips with the votes registered on 20,625 of the 10.35 lakh electronic machines deployed nationwide cannot guarantee the integrity of the electoral process against targeted tampering or machine malfunction, specialists have said.

They have added that different sizes of random counts in different constituencies would have been a more reliable option. A researcher who was part of a panel enlisted by the Election Commission has agreed with these specialists and told The Telegraph that his answer would have been different had the poll panel reframed its question.

The court upheld its April 8 directive to the Election Commission to undertake counts at five randomly selected polling stations in each of the 4,125 Assembly segments. The counts will cover at least 20,625 pairs of machines (2 per cent of the 10.35 lakh EVMs) nationwide as each polling station will have one voting machine and a VVPAT device.

The actual number will be slightly higher than 20,625 as Union territories, which do not have Assembly constituencies, will randomly choose five stations in the Lok Sabha constituency for the exercise.

The tallying is done by physically matching the paper slips, which record the candidate’s name, number and the symbol for which the vote has been cast and fall into a box, with the digital count displayed by a voting machine. If there is no discrepancy in the total number each symbol has received, it will rule out tampering.

But researchers at the Indian Statistical Institute (ISI) and other academic institutions have cautioned that the 20,625 counts cannot ensure that the winner in every constituency is indeed the candidate who bagged the highest votes.

Antar Bandyopadhyay, Krishanu Maulik and Rahul Roy at the ISI and the others say calculations to ensure that the winner in every constituency reflects the choice of voters would require different sizes of random counts in different constituencies.

The Supreme Court ruling comes against the backdrop of persistent but unproven claims that EVMs are vulnerable to malfunction or manipulation and Opposition demands to enhance counts on VVPAT slips.

Facing such demands, the Election Commission had last year asked a three-member panel of statisticians to “arrive at a mathematically sound, statistically robust, practically cogent solution to the issue of number/percentage of VVPAT slip counts to be done during the elections”.

The panel — Abhay Bhatt from ISI Delhi, Rajeeva Karandikar, director, Chennai Mathematical Institute, and Onkar Ghosh, deputy director-general, Central Statistical Organisation — recommended that 479 random counts from the 10.35 lakh VVPAT-EVM pairs would be sufficient to detect defective EVMs if the proportion of defectives is 2 per cent (20,700) or higher.

But other statisticians contend that neither 479 nor 4,125 nor 20,625 would ensure integrity of the electoral process at the constituency level.

“The exercise leading to 479 looked for defective EVMs at a national level,” said Bandyopadhyay, an associate professor of theoretical statistics at the ISI. “To ensure integrity of the electoral process, we need to look for signatures of targeted tampering at the constituency level.”

Sampling specialists say detecting constituency-level tampering would require constituency-specific random counts, depending on the sensitivity of each constituency.

“If there is malicious intent — and we are not saying there is — it won’t be random, but will be targeted in constituencies where it is easy to tilt the outcomes,” said Maulik, also an associate professor at the ISI.

But the panel members assert that they have addressed the specific question posed to them by the EC.

“It was our understanding that the EC asked us to suggest a sample size so as to ensure that EVMs are recording the votes correctly,” Karandikar said. “Our statistical exercise was about the efficacy of EVMs and we have answered this question.”

But the scientists at the ISI and others, including Tathagata Bandyopadhyay, a professor and dean at the Indian Institute of Management, Ahmedabad, say in India’s system of democracy, catching tampering or malfunction at the constituency level is critical.

The IIM’s Tathagata Bandyopadhyay uses an analogy from the business sector to explain sensitivity.

“Imagine a company selling laptop batteries to five different laptop manufacturers,” he said. “The manufacturer may have an even more stringent or liberal threshold, depending on its required quality level. One might be okay with five per cent, another might require 0.5 per cent. In the context of elections, the threshold quality level for a constituency should be determined by the victory margin.”

Karandikar agrees with the ISI and IIM researchers that calculations would be different if the question from the EC had been: what sample is required in each parliamentary constituency to be sure that the winner via EVM is also the winner via VVPAT count?

“Then the answer would depend on the number of EVMs in the constituency and on the victory margin as seen via the VVPAT count,” Karandikar told The Telegraph.

This is exactly the argument by the ISI researchers — that the random counts will vary constituency to constituency depending on the sensitivity of a constituency.

Karandikar also concedes that the 2 per cent is arbitrary but based on the premise that if someone is trying to tamper with the poll, the effort would be to influence the outcome at a national level.

“In our assessment, tampering in less than 2 per cent of EVMs will not significantly change the arithmetic in Parliament,” Karandikar told The Telegraph. But, he said, it could be higher or lower. “If need be and if the EC or the Supreme Court asks, we can calculate for any other threshold.”

Karandikar said the panel’s exercise did not factor in malicious intent and tampering at the constituency level.

“But if two per cent or more EVMs in use nationwide are defective, for whatever reasons, whether from manufacturing defects or targeted tampering, the procedure suggested by us would detect it with very high probability,” he said.

“Moreover, if someone gets physical access to the EVM to tamper with it, the same person can also tamper with VVPAT slips and, in any case, this is much more difficult than tampering with an old-style ballot box with paper.”

A senior mathematician who counts both groups of statisticians as friends said there is no disagreement between them. “They are addressing two completely different questions,” said Gadadhar Misra, professor of mathematics at the Indian Institute of Science, Bangalore.

“The question of detecting targeted tampering at a constituency level is complex — one might be able to develop some algorithm based on certain reasonable assumptions to detect it,” Misra said.

He cited the example of research by a University of Melbourne, Australia, group that has shown that for almost all real elections, a risk-limiting audit can be done by looking at only a small fraction of ballots.

“I am sure if Professor Karandikar and others were asked the question about targeted tampering, they would come up with an appropriate answer, perhaps along the lines of the research by the Australian group,” Misra said.

ISI Delhi’s Roy said the suggestion for reliable audits at each constituency is not intended to suggest that vote tampering is occurring. “It is not enough to have only a credible electoral process, it has to be shown to be credible too,” Roy said.

What does the Election Commission of India say?

The EC has repeatedly asserted that a mix of technological measures and administrative and security procedures make India’s EVMs absolutely non-tamperable. These include: