He was accompanied by his ministers, Congress and DMK MLAs besides the independent legislator who had earlier supported the government 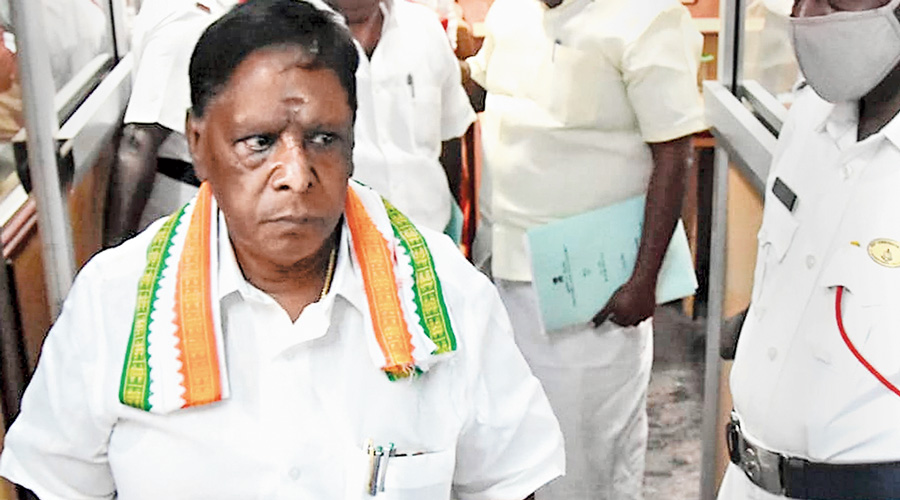 Puducherry chief minister V. Narayanasamy and his cabinet colleagues resigned on Monday after the government lost majority, with 11 members in the House against the Opposition’s 14.

After staging a walkout from the Assembly before the motion seeking a vote of confidence was put up for voting in the House, Narayanasamy proceeded to the Raj Nivas and submitted his resignation to lieutenant governor Tamilisai Soundararajan.

The chief minister said the ruling side walked out after Speaker V. Sivakolundhu did not accept its contention that only elected members have voting rights during the confidence vote, apparently referring to the three nominated BJP members.

“Our view that only the elected members can vote in the House was not accepted by the Speaker. So, we walked out of the Assembly and met the lieutenant governor and gave resignation letter of my cabinet,” the Congress veteran said.

Legal experts would be consulted on the matter, he said, while dubbing the turn of events surrounding the issue of voting rights of nominated members, the BJP in this case, as a “murder of democracy”.

Narayanasamy said he was accompanied by his ministers, Congress and DMK MLAs besides the independent legislator who had earlier supported the government.

It was up to the lieutenant governor to decide on their resignation, he added. He, however, did not respond to queries on his next course of action.

The Congress governemnt in Puducherry fell after Narayanasamy’s resignation.

With the exit of the Congress government in Puducherry, Punjab, Rajasthan and Chhattisgarh are the only three states in the country ruled by the party on its own.