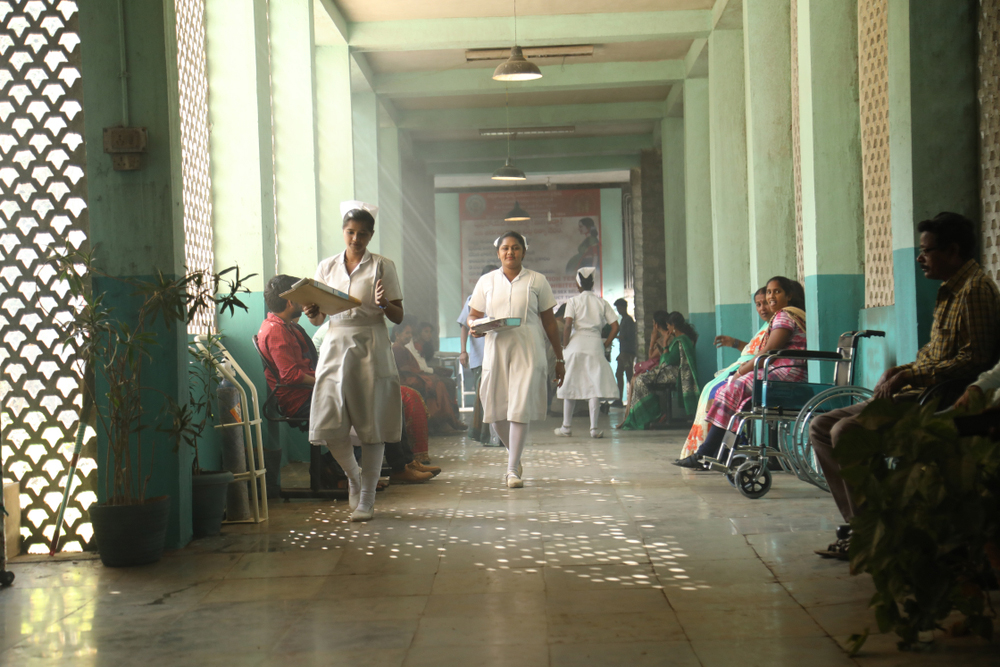 The Narendra Modi government’s free hospitalisation scheme marked a 51 per cent drop in claims during the lockdown, a government report has said, validating concerns among health groups that the lockdown has hobbled essential health services.

A National Health Authority (NHA) report has said that treatment claims under the Ayushman Bharat Pradhan Mantri Jan Aarogya Yojana during the lockdown fell by 64 per cent for cancer treatment, 28 per cent for childbirth services and 24 per cent for neonatal care. The NHA runs the Yojana.

The scheme offers cashless hospital care for over 1,300 surgical or medical services through an annual Rs 5 lakh cover per family for around 10 crore poor and vulnerable households. Patients seek free treatment from empanelled public and private hospitals, which file claims for reimbursement by the government.

The average weekly claim volume during the lockdown (March 25 to June 2) was 51 per cent of the average witnessed during the 12 preceding weeks (January 1 to March 24), the NHA data show. 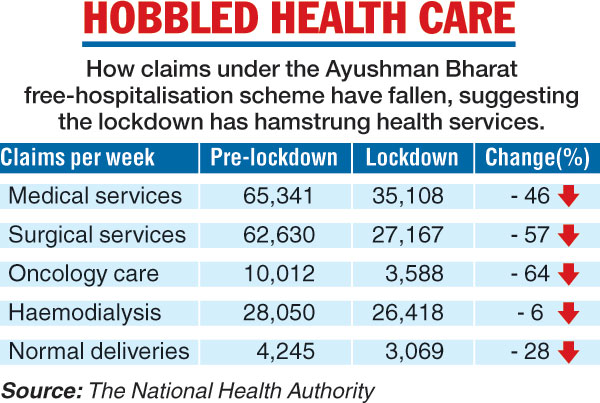 The NHA report has noted a 78 per cent fall in cardiovascular surgeries — coronary stent implantation or coronary arterial bypass procedures — to 774 cases per week in the first week of the lockdown from an average 3,490 earlier.

Through the 10 weeks from March 25 to June 2, the claims for cardiovascular services did not exceed 1,560 per week, a figure that marks a 55 per cent fall.

The claims for haemodialysis, predominantly provided by the private sector, fell by only 6 per cent. Claims for planned procedures such as cataracts and joint operations registered the sharpest declines — over 90 per cent.

The report expresses concern about the fall in hospital admissions for childbirth and related services. Nationwide, claims for normal childbirth fell by 28 per cent, those for Caesarean sections by 23 per cent, and those for the care of newborns under a month old by 24 per cent.

Bihar and Chhattisgarh recorded the sharpest declines in normal deliveries under the Yojana.

The report says it could not be determined whether these trends implied a large increase in the number of home deliveries, although this was possible because of the transport shutdowns and the “diminished role” of accredited health workers under the lockdown.

“What this report shows is a collapse of essential health services at many places,” said T. Sundararaman, a community medicine specialist and former director of the National Health Systems Resource Centre, a unit of the Union health ministry.

Sundararaman and other physicians and public health experts with the Jan Swastha Abhiyan, or the People’s Health Movement, had in April sounded a warning about the adverse impacts the lockdown may have on healthcare services.

They had cited anecdotal accounts of disruptions of child and maternal health services, and routine services for the treatment of non-communicable diseases, and questioned the rationale for the Union health ministry’s advisories discouraging elective surgeries and outpatient consultations.

The NHA report has noted a 67 per cent decline in the use of public hospitals and a 58 per cent fall in the use of private hospitals under the Yojana during the early weeks of the lockdown, leading to a slight shift in the claims from the public to the private sector.

“This shift to the private sector likely occurred because the public hospitals were repurposed for the coronavirus treatment,” Sundararaman said.

“But we also have anecdotal accounts of private hospitals declining services to patients – when they were needed the most, they turned patients away.”

The NHA report says that private hospitals may have reduced their services because of a fear of infection among their healthcare workers or a fear among the owners about their business outlook being jeopardised if they were thought to be treating Covid-19 patients.

Senior Jan Swastha Abhiyan physicians had said in April that the lack of public transport and the fear of Covid-19 may be preventing patients from approaching hospitals.