PM Modi flags off 8 new trains to Statue of Unity 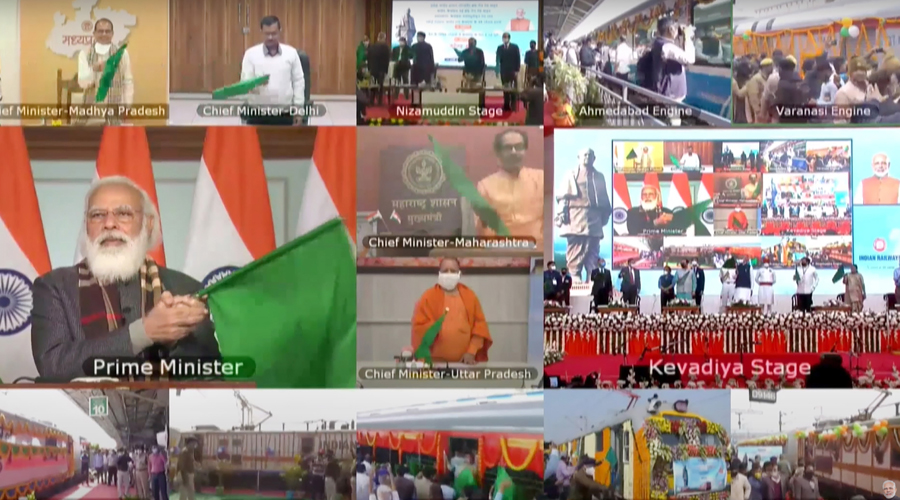 Prime Minister Narendra Modi on Sunday flagged off eight trains connecting Gujarat's Kevadia, where the Statue of Unity of Sardar Patel is located, to different regions of the country.

Modi said more tourists flock to the Statue of Unity than the Statue of Liberty in the US, adding nearly 50 lakh tourists have visited the former since it opened in 2018.

He referred to the Dedicated Freight Corridor project as "an example of the way things functioned in our country in the past."

"A few days ago, I inaugurated a large section (of the Dedicated Freight Corridor). On this very important project, in eight years work was done only on paper. From 2006 till 2014, not even one km track was laid. Now, in the next few months, 1,100-km work will be completed," he said.

The prime minister said this is possibly the first time that so many trains were flagged off at the same time for one destination.

With increased connectivity, over one lakh people will visit Kevadia daily in the near future, he said citing a survey.

The amount of work done to modernise the country's railway infrastructure in recent years is unprecedented, Modi said.

Unlike in the past when less focus was given to new ways of thinking and technology, wide changes have been made in the railway system on many fronts, with the government's focus on self-reliance in railway manufacturing and technology being a big reason behind the change, he said.

Besides tourists visiting the Statue of Unity, the local populace will be the biggest beneficiary of the new rail connectivity, he said.

"Today, Kevadia is no longer a small place in a remote area of Gujarat. It is emerging as the world's biggest tourist destination," he said. Despite everything remaining closed for months during coronavirus pandemic, the number of tourists visiting Kevadia is increasing fast, he added.

He said the new Kevadia railway station is an example of his government's efforts to ensure that the Railways remain environment-friendly. "Kevadia station is the country's first to get green building certification from the beginning," he said.

The Ahmedabad-Kevadia Jan Shatabdi Express, one of the eight trains, is equipped with the Vistadome coache which offers large viewing areas with rooftop glasses and seats for passengers.

Modi said the Vistadome coaches on trains to Kevadia will make the travel attractive.

The amount of work done to modernise the country's railway infrastructure in the recent years is unprecedented, he said.

Unlike in the past when less focus was given to new thinking and new technology, the approach has changed to make wide changes in the railway system, and changes have taken place at once on many fronts, he said.

"With the modernisation of the rail network, parts of the country previously not connected by railway networks are getting connected now. The conversion into broad gauge of old rail routes and electrification is being done much faster than before.

"Rail tracks are being made capable for (operating trains at) higher speed. This is the reason it is being made possible to run semi high-speed trains. We are fast moving towards high speed track and technology," Modi said.

"Had we not manufactured high horse-power locomotives in India in the past, then could India run the world's first double-stack long-hold container train?" he said.

The establishment of India's first deemed railway university in Vadodara is a step in the same direction, he added.

The eight trains Modi flagged off will connect Kevadia, which is around 200 km from the state capital Ahmedabad, to Varanasi, Dadar in Mumbai, Ahmedabad,Hazrat Nizamuddin in Delhi, Rewa in Madhya Pradesh, Chennai and Pratapnagar in Vadodara.

Modi paid tributes to AIADMK founder M G Ramachandran as he mentioned the train connecting Kevadia to Chennai, which was flagged off from MGR Chennai Central station.

"It is a happy coincidence that today is the birth anniversary of Bharat Ratna MGR. From movie screen to political screen, MGR ruled the hearts of people. His life, his entire political journey was dedicated to the poor.

"He worked continuously so that the poor could get a respectful life. We all are working to fulfil the ideals of Bharat Ratna MGR. Only a few years ago, the Chennai Central Railway Station was named after MGR. I offer my tributes to MGR," he said.