Amid inflation and lack of jobs, a question in tribal belt: Will Murmu’s elevation fill stomachs? 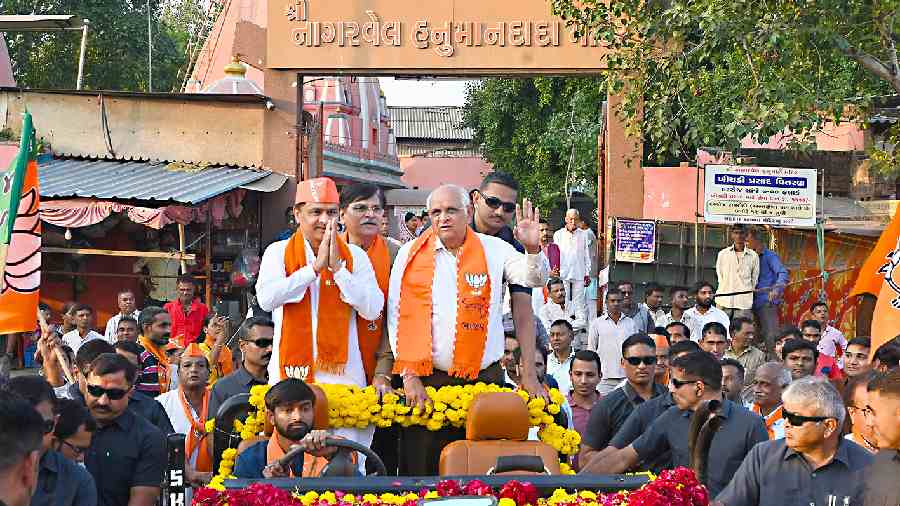 By getting Droupadi Murmu elected as the first tribal woman President, Prime Minister Narendra Modi and the BJP had hoped to breach the Congress’s stronghold and sway the tribal voters in the 27 Scheduled Tribe seats of Gujarat.

Seated outside a shop in Maldapata under the Mandvi constituency, young Prabhu Chaudhary, a tribal farmer, doesn’t seem charmed when asked about the “historic” move, as claimed by Modi in his campaign.

Instead, he bursts out in anger against the BJP. “Murmuji Rashtrapati ban gaya to mera aur mere parivar ka pet bhar jaayega? (Will Murmu’s elevation as President feed me and my family?)” he asks.

Prabhu goes on to say how “mahangwari (price rise)” has made living difficult for the poor tribal families with very little farming opportunities.

“All essentials have become so costly that it is very difficult for poor people like us to survive. Modiji should bring the prices down if he cares about us,” Prabhu says as the tribal villagers seated with him nod in agreement.

“Mahangwari”, along with the lack of jobs, is a constant complaint across Gujarat from cities to villages, but acquires a grave proportion among poor tribals with small land holdings.

The Congress has a traditional hold in the tribal areas but since Modi’s rise, the BJP too has made substantial inroads aided by the RSS’s groundwork hinged on Hindutva.

In the last polls, the Congress maintained its sway, winning 15 of the 27 ST seats. The BJP bagged eight while two seats went to the Bharatiya Tribal Party and one to an Independent.

This election, the BJP has launched an aggressive campaign in the tribal areas with a target to win 20 of the 27 seats, tapping into Modi’s move to get a tribal woman elected as President.

Addressing a poll rally in Netrang, Modi accused the Congress of having no respect for the tribal community.

“The Congress not only opposed the candidature of Droupadi Murmu but also tried its best to defeat her,” he said, seeking to woo the tribal voters. Travelling across the tribal regions, there is no ring of the Murmu factor and the voters instead flag livelihood issues. In Netrang, farmer Kasru Chaudhary says he had no idea about Murmu and instead complains of farm woes. He says that the Centre’s Rs 6,000 annual support for small farmers is not enough to meet the rising costs.

“We will vote for the Congress out of respect for my grandmother, but many here are drifting towards the new party,” says Jayash, a tribal youth in Rajpipla.

He says that his grandmother has told them to vote for the Congress till she is alive since Indira Gandhi had done a lot for the community.

“My grandmother tells me that we got land rights because of Indira Gandhi,” the youth says.

In the Mandvi constituency, the wider opinion is that the Congress will retain the seat given the fact that the candidate is from the Chaudhary tribal community that dominates the constituency.

Similarly in adjoining Mangrol, the BJP’s Ganpat Vasava is likely to emerge victorious, but in both these constituencies and others too, the AAP seems to have come up as a powerful third player.

“In this election the AAP will win only 10-12 seats but in the next elections it will come to power in the state,” predicts Praful Vasava, a tribal farmer in Bhamri. Asked why he is excluding the Congress, Praful says the party has turned “old” and now people are looking for a “naya (new) party”.

Amid price rise pressure and dwindling incomes, the AAP’s enticing promise of many “freebies” has generated a lot of interest and curiosity among the voters.

From cities to villages, this correspondent, a resident of Delhi, is frequently asked about the benefits Kejriwal has handed out in the national capital.

The AAP, which hardly has any organisation in Gujarat, may not be able to win enough seats and dislodge the Congress as the principal Opposition but its foray certainly seems to have caught the voters’ imagination.

“Both BJP and Congress leaders are not seen after they win. People in my village have warned the candidates of the two parties not to come for votes. Many want to try the jhadu this time,” says Jaganbhai Tadvi of Jamkhava.