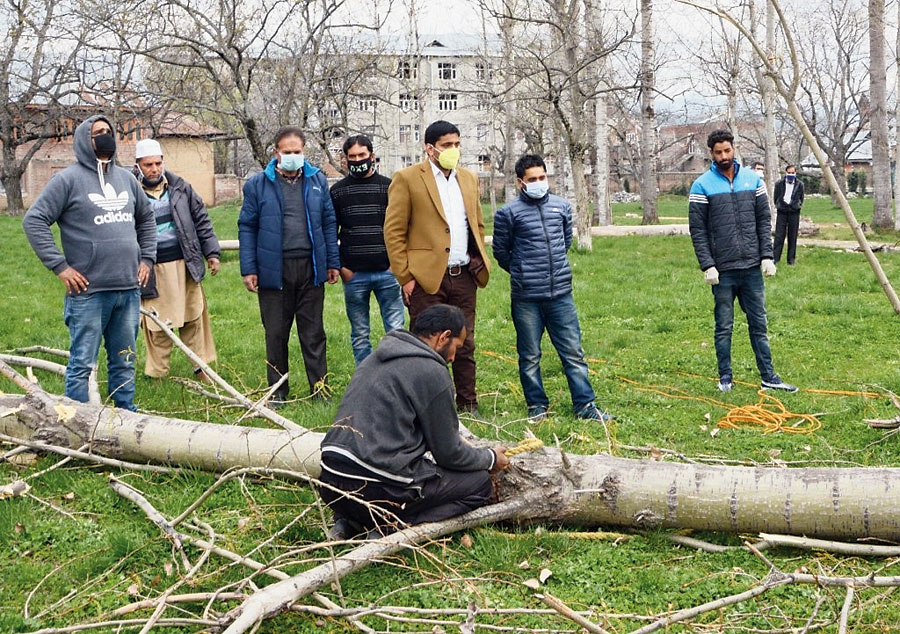 Tens of thousands of poplars are poised to face the axe in Kashmir, thanks to a government order to lop or fell them that cites pollen-related infections in the wake of the “spread of Covid-19”.

While the order does not specify the connection between the poplar pollen and Covid-19, an expert said that “aerosol” from the female Russian poplar can carry and spread the novel coronavirus.

Another speculated reason is that the “pollen allergy” the Russian poplars are believed to cause in spring can intensify the Covid-19 scare because of the similarity of symptoms, and so the government wants the trees axed.

Pandurang Kondbarao Pole, divisional commissioner of Kashmir, has asked officials to lop or fell the “female Russian poplars” on government land and ordered the deputy commissioners to ensure such lopping by private landowners within a week.

Some 15 million Russian poplars dot Kashmir’s landscape, with the females peppering the air with fluffy cotton-covered seeds during spring.

There’s nothing Russian about these trees, introduced here in 1981 under a World Bank-aided afforestation programme, but the moniker has somehow stuck. These poplars can grow up to 40 feet tall in eight to nine years, unlike the Kashmiri poplars that take decades to grow to full height.

A senior botanist who requested anonymity said the pollen-related concerns were “scientifically baseless” because most of the Russian poplars in Kashmir are female and therefore don’t produce pollen.

“There is indeed a spike in allergy-like respiratory illness in the Valley during spring but this has never been properly investigated,” the scientist said.

“There are a large number of flowering plants that also bloom during the same period and might be the source of the pollen.”

Some studies have indeed suggested that dust, pine and chinar trees are the principal causes of the springtime allergy.

Since the government order specifically mentions the lopping or felling of female Russian poplars — which don’t produce pollen — it’s possible the directive was motivated by fear about the poplar seeds spreading the coronavirus.

Dr Shakil Ramsho, head of the department of environmental science at Kashmir University, supported the theory of the female Russian poplar spreading the virus.

He said the “cotton balls” scattered by these trees were seeds and not pollen, as is widely believed.

Ramsho told The Telegraph: “Based on some recent studies, I have concluded that this aerosol or flying cotton is a serious Covid-19 threat for Kashmir. The aerosol load from these poplars increases significantly from late April to June and might act as an effective carrier for the virus to spread across the Valley.”

These poplars are of great use to the Valley’s apple growers who pack their produce in wooden boxes made of poplar timber. Many of the growers are therefore unhappy at the government initiative.

However, the belief that these poplars cause springtime allergy has made the trees unpopular among large sections of the population, who will be glad to see them go.

Responding to petitions, Jammu and Kashmir High Court had in 2015 ordered the state government to fell or lop these trees. But there’s not been much progress on the ground.

A series of orders from the Valley administration and district officials over the past few days has spawned confusion whether the female Russian poplars should be felled or lopped (have all their branches except those at the top removed).

Officials said the order from Pole came at a meeting chaired by him. The order said the meeting had been called “to discuss the pollen-related infections in wake of already spread of Covid-19 to work out the strategy and measures to get rid of this menace (female Russian poplars) before onset of flowering season”.

It directed the social forestry department to fell “42,000 poplar trees of Russian species” (that stand on government land) but begin by “lopping” them — leaving the need for the double effort unexplained.

It told the deputy commissioners that if any landowner failed to lop the female Russian poplars on their land, officials must cut the trees down.

However, several deputy commissioners have in their orders asked officials to fell the trees outright.

Srinagar deputy commissioner Shahid Iqbal Choudhary has directed the felling of all “female Russian poplars” in the district starting April 10.

“In any case, if the owners don’t lop them, many trees are likely to be felled either by people in the locality or by the government,” an official said.

Kulgam deputy commissioner Showkat Aijaz said he had directed people to lop but not cut down these poplars. He admitted that some people were felling them on their own.

Mehrajuddin Malik, the social forestry department’s director for Kashmir, said his department had been told to lop some 40,000 trees on forestland while private owners had been directed to axe them.

Malik agreed that it would be an uphill task to lop or fell the millions of female Russian poplars in the Valley.

Besides, lopping trees of such height requires skill, and there aren’t enough experts for an exercise of such a huge scale.

An official spokesperson said 14 patients had tested positive for the novel coronavirus in Jammu and Kashmir on Thursday, taking the total to 184.