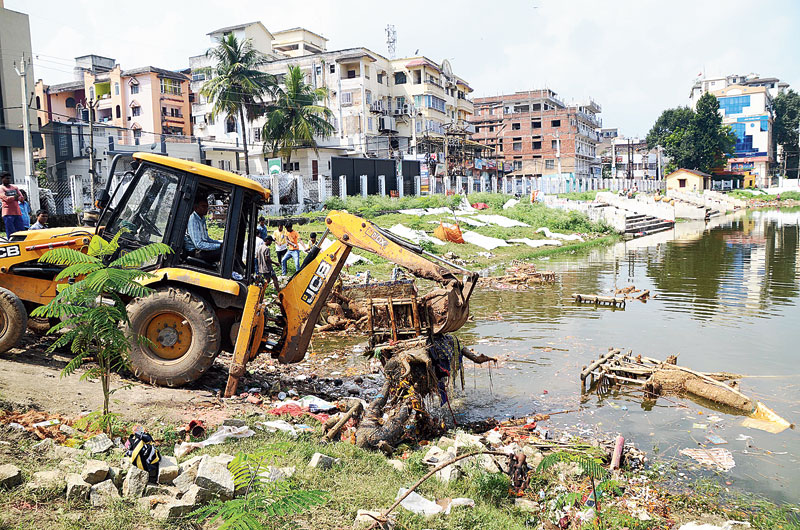 Ranchi Municipal Corporation (RMC) on Friday kicked off a pond clean-up drive with the aim to get around 61 water bodies Chhath-ready.

Chhath will be celebrated on November 2 and 3.

RMC officials held a marathon meeting on Thursday where it had set a target to clean up ponds and repair the approach roads to the water bodies before Diwali.

“Today (Friday), the cleaning work was undertaken at Ranchi Lake, Button Talab, Tetartoli pond, Jail Talab and Chadhri pond. We have pressed as many as 300 safai workers and around 30 tractors. We have decided to complete the clean-up before Diwali, but work will not stop after that. People throw Diwali and Kali Puja parapharnalia in ponds. We have to take those out of the water. We will barricade a small portion of ponds where people can throw puja items,” RMC health officer Kiran Kumari said.

She said a supervisor would be deployed at each pond to look after cleanliness work.

The civic body is also planning to hire additional earthmovers and tractors to expedite the cleaning process.

“This time, we have decided to clean up ponds regularly instead of on special occasions. It will help us to keep the water bodies clean round the year,” she said.

Incidentally, the RMC had made a similar claim last year as well.

This year, the RMC has an additional burden of discouraging single use plastic.

The civic body has decided to put up banners and hoardings near ponds to seek public support.

The digging work will be taken up after Diwali.

“The post-Chhath cleaning work will be undertaken at ponds, but we will not use the tractors that carry garbage for the purpose. We will hire separate trucks to transport the puja leftovers. They will not be disposed of at the dumping yard in Jhiri, but at a separate place,” she said.