Farmers also criticised the Statement of Objects and Reasons for the repeal bill, saying it reflected the government’s 'egoistic and adamant attitude' 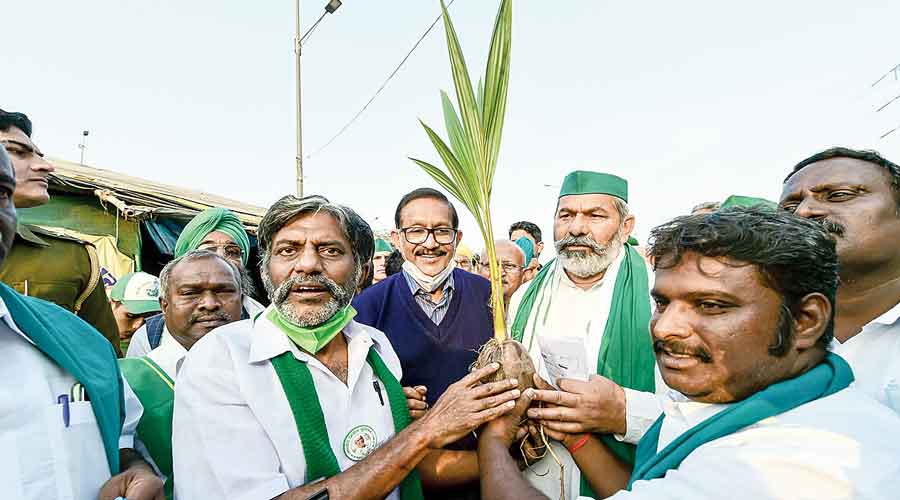 Farmers from Tamil Nadu shout slogans at the Ghazipur border protest site near Delhi after the bill to repeal the three farm laws was passed.
PTI Photo
Anita Joshua   |   New Delhi   |   Published 30.11.21, 02:48 AM

The farmers’ unions on Monday were unhappy at the way the Centre had rushed through the repeal of the three controversial farm laws without discussion, denying Parliament the opportunity to discuss their flaws and the problems faced by the farming community.

The farmers also criticised the Statement of Objects and Reasons for the repeal bill, contesting some of its claims and saying it reflected the government’s “egoistic and adamant attitude” and was “meant to misguide gullible people”.

While rejoicing that “history has been made today in India” with the three laws’ repeal, the Samyukta Kisan Morcha that is spearheading the farmers’ movement said the “development was marred by the fact that there was no debate allowed on the bill”.

The omission rankled particularly since the farmers had made the Constitution and democratic principles central to their movement.

Nor was there any word of condolence from the government over the deaths of hundreds of farmers during the yearlong protest.

“The whole process has been unilateral,” a farmer leader said, elaborating on a Morcha statement that noted how the laws had originally been brought in through an ordinance and then forced through Parliament amid Opposition protests.

“The Prime Minister announced the repeal unilaterally without consulting the cabinet, which cleared the repeal bill afterwards. And today, we saw that attitude again in Parliament in the manner in which the government avoided a discussion.”

The Morcha questioned claims made in the Statement of Objects and Reasons accompanying the repeal bill.

“In most state APMC Acts, farmers already have the freedom to sell their produce to any buyer at any place of their choice and such a freedom was not given for the first time by the (Narendra) Modi government as is being claimed,” the Morcha statement said.

The statement said: "Further, any so-called freedom without protection from exploitation is meaningless. The ecosystem that was sought to be created in de-regulated spaces is meant for corporates and traders and not for farmers."

It added: "The fact that these laws were enacted in an unconstitutional manner has not been admitted to, even now."

"The Statement of Objects and Reasons for the Government of India's repeal bill reflects the egoistic and adamant attitude of the present government, and it is only meant to misguide gullible people, if any," the Morcha said.

The Statement of Objects and Reasons repeats what Prime Minister Modi had said in his televised address announcing the repeal on November 19.

"Even though only a group of farmers are protesting against these laws, the government has tried hard to sensitise the farmers on the importance of the farm laws and explain the merits through several meetings and other forums," it says.

To the farmers, this reflects the government's refusal even now to accept it was wrong to have enacted these laws, and raises the spectre of these legislations being brought back through BJP-ruled state governments.

The Morcha statement acknowledged the Opposition's efforts to back the farmers' demands.

"It can be seen that nearly all Opposition political parties of India are putting their weight behind these demands, including MSP legal guarantee," it said.