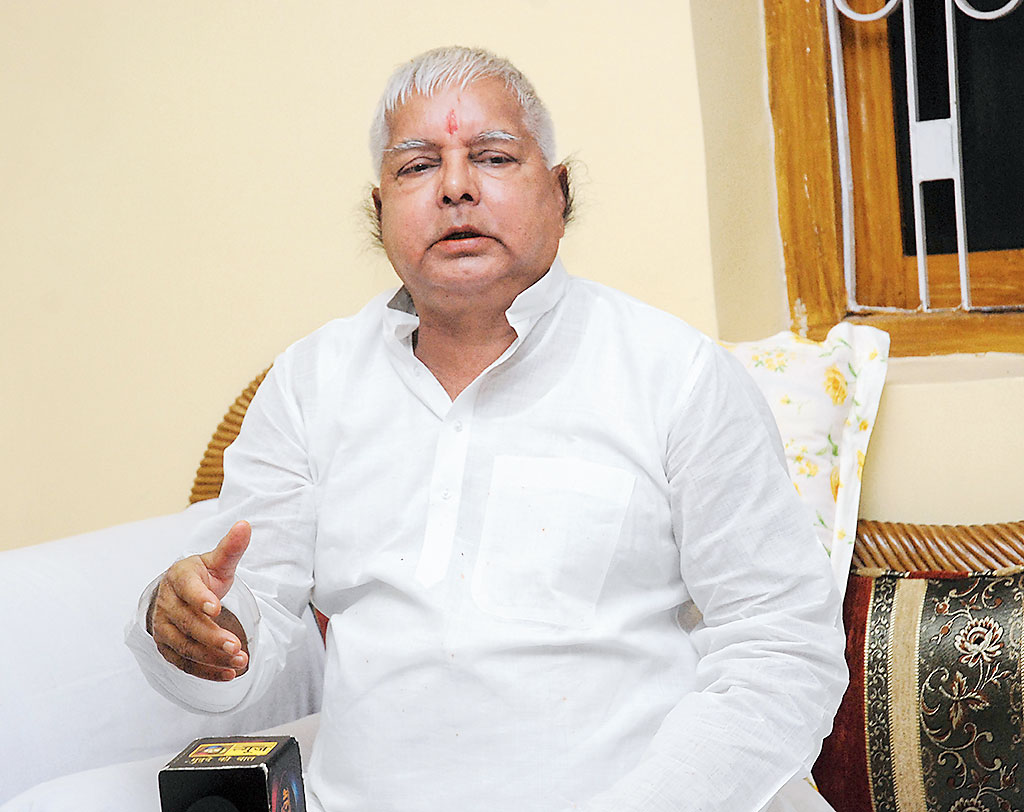 The Rashtriya Janata Dal (RJD) carries the legacy of social justice as envisioned by Jayaprakash Narayan, Ram Manohar Lohia and Karpoori Thakur and as such the young leaders — be it my sons and daughters or the children of my other political colleagues — would have to compete to shoulder this legacy.

As a political activist for the last 50 years and more, I have lived and struggled for the cause of the marginalised sections, the minorities and the toiling people who found me worthy of shouldering the legacy of the Indian greats — JP, Lohia and Karpoori Thakur — whose thoughts and actions were rooted in the larger philosophy of the Father of Nation, Mahatma Gandhi.

The latest discussions in the media on who I would appoint as my successor and who would carry forward my legacy are ridiculous and shallow. It is the people — particularly the poor, deprived, exploited and the minorities at the receiving end today — who would select their leader on the basis of his/her capability to work for the cause of social justice and secularism.

The battle for social justice and secularism is neither my personal legacy nor have I inherited it from my biological ancestors. I have all my life simply fought for the cause of social justice and secularism, and the people — my ultimate masters — have found me worthy to take up their cause. Thus, the young generation leaders would have to work and pass the test of the people.

The present RSS-BJP dispensation has gained unbridled control over the media — particularly Internet data and social media — interfering with the spirit of co-existence and communal harmony in a big way.

In the late 1990s and early 21st century, I had asserted “ye IT wai-Ti kya hota hai”. Then the media and the elite sections had ridiculed me. Now, you can easily see that the youths in the villages have forgotten their traditional games like gilli danda, chikka and kabaddi. They have forgotten the culture of coexistence, cooperation and harmonious relationship. Fellow and neighbourly feelings have disappeared. Children don’t listen to their parents. Families are breaking up. Youths don’t sing folk songs. They stay engrossed in their mobile phones and make their opinion on the basis of messages being fed through WhatsApp and social media sites. And those who control the media design the messages for their own ends.

I don’t say that mobile phones should be thrown away. But young leaders from parties like the RJD should move around among the people and work for the awareness and restoration of our original social and family values. Our Constitution is under threat because the youths have got disconnected from the values which played a role in making of the Constitution promoting pluralism, co-existence and communal bonhomie in society.

There is all-round despondency in Bihar, particularly after the Lok Sabha elections. Hordes of children are dying of chamki (AES) fever in Muzaffarpur. The prices of tomato and other vegetables and fuel are sky-rocketing. Dalits and minorities are being persecuted. The RJD should not expect the BJP-JDU government to do better on these fronts. Rather, its leaders — young and old — and its cadres, instead of confining themselves to the cosy environs of Patna and Delhi, should spread out among the people and carry out an intense agitation at block-level hospitals, block offices and district offices for the relief of the people.

Instead of politicking for the inheritance of the so-called legacy, the new RJD leaders should camp in the villages reviving the culture of Chaita, Birha, Kajri, Holi and other folksongs that fostered collectivism, pluralism, community life, love and co-existence. The cadres and leaders should be an inseparable part of the struggle of the marginalised, exploited, deprived and the minorities.

The mantra is: Just work for a year or two among the people. Live with their struggle and agony and see how the people take you to lofty heights.

This article is an analysis of the current political scenario by Lalu Prasad, the RJD leader and former Bihar chief minister. Lalu Prasad, a prisoner at Birsa Munda Central Jail and now undergoing treatment at a hospital in Ranchi, shared his views with Nalin Verma, co-author of Gopalganj to Raisina — My Political Journey, Lalu Prasad’s autobiography. The interaction took place on Saturday with official permission