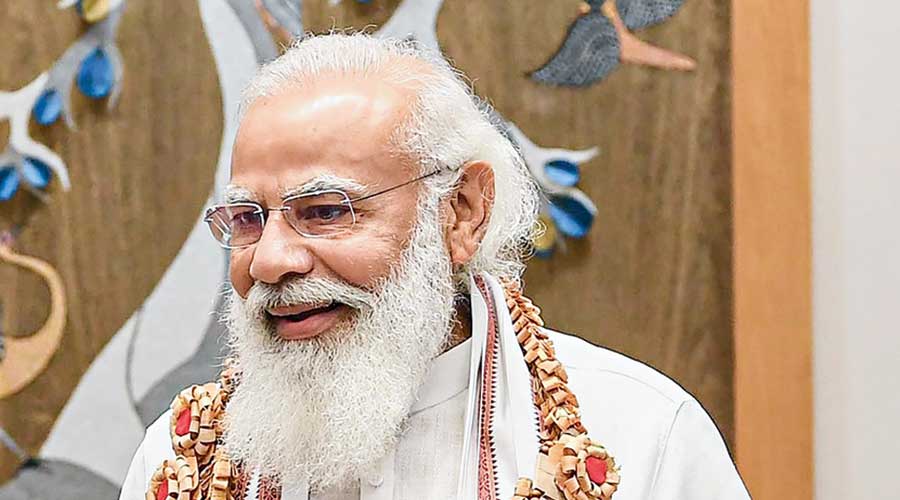 A picture posted by the PMO shows Prime Minister Narendra Modi wearing what looks like a Manipushpa Hara, a garland mostly made of sandalwood shavings. Modi was posing with the new Karnataka chief minister BS Bommai who had probably garlanded the Prime Minister
Sourced by The Telegraph
J.P. Yadav   |   New Delhi   |   Published 31.07.21, 02:34 AM

The Narendra Modi government on Friday dismissed as a “non-issue” the allegation that the Pegasus spyware was used to snoop on Indians and rejected the Opposition’s demand for an immediate discussion in both Houses of Parliament.

“The IT minister (Ashwini Vaishnaw) has already given a detailed statement in both Houses. A non-issue is being used to stall the House. There are many other important people-related issues,” parliamentary affairs minister Pralhad Joshi told the Lok Sabha during Question Hour amid Opposition demands for a discussion.

“This (Pegasus) is a non-issue and also a non-serious issue,” Joshi stressed.

For the ninth day, Parliament was rocked by protests as the Opposition sought an immediate discussion on the revelation by an international consortium of 17 media organisations that the Israeli-made Pegasus spyware had been used to target individuals around the world for surveillance. On the list of potential targets were the names of many prominent Indians, including politicians, journalists, activists and constitutional figures.

According to Israel, the spyware is sold only to governments. The Modi government has neither confirmed nor denied that it bought the spyware.

As the Lok Sabha assembled on Friday, Congress’s leader of the House Adhir Chowdhury said the Opposition had from the start of the monsoon session been demanding a discussion on Pegasus. “Along with Pegasus, other issues like farm laws, Covid and price rise can also be discussed,” he said.

The Speaker cut Adhir short and said he could raise the issue after Question Hour. But a little later, the parliamentary affairs minister rose to describe Pegasus as a “non-issue” and a “non-serious issue” that does not merit a discussion.

As the Opposition remained firm on discussing Pegasus first and continued to protest in the Well of the House, the Lok Sabha was adjourned till Monday. On Wednesday, leaders of 14 Opposition parties had met in Parliament to iterate their resolve to press for a discussion in Parliament and a Supreme Court-monitored probe into the snooping allegations.

In contrast to the Modi government’s dismissive stance, the government of Israel has said it is “taking the allegations seriously”.

The Israel government said in a statement on Wednesday: “Israel grants cyber licences only to nation-states and only to be used for the needs of dealing with terrorism and crime.” Israel has set up a senior inter-ministerial team to look into the spyware allegations.

The Modi government’s refusal to even talk about the issue in Parliament has exposed as hollow its repeated claims so far that it is ready to “discuss all issues” and that the Opposition has been deliberately disrupting proceedings.

The minister told reporters the Opposition can still seek clarifications from Vaishnaw, who in his statement had described the spyware allegations as an attempt to malign India but had not answered the one question being asked: Had India bought the Pegasus spyware? The Opposition has rejected Vaishnaw’s statement and demanded that after a discussion, no less than Union home minister Amit Shah should clarify the government’s position since Pegasus snooping involves privacy and internal security.

The Pegasus scandal has shown how every citizen’s privacy is at risk. At least 155 Indians are said to have been the targets or potential targets of surveillance by clients of the NSO Group
Shutterstock

Farmers at the Delhi-Ghazipur border on July 30. They have been protesting against three farm laws for eight months.
Prem Singh

Free oxygen camps run by voluntary organisations brought out the enormity of the crisis in April-May. The Centre recently said it had no data on oxygen deaths in the country.
Prem Singh

Petrol prices have crossed Rs 100 in several places in the country at a time the pandemic has driven down incomes. Indian Oil Corporation on Friday clocked a three-fold surge in first-quarter net profit at Rs 5,941.37 crore
File picture