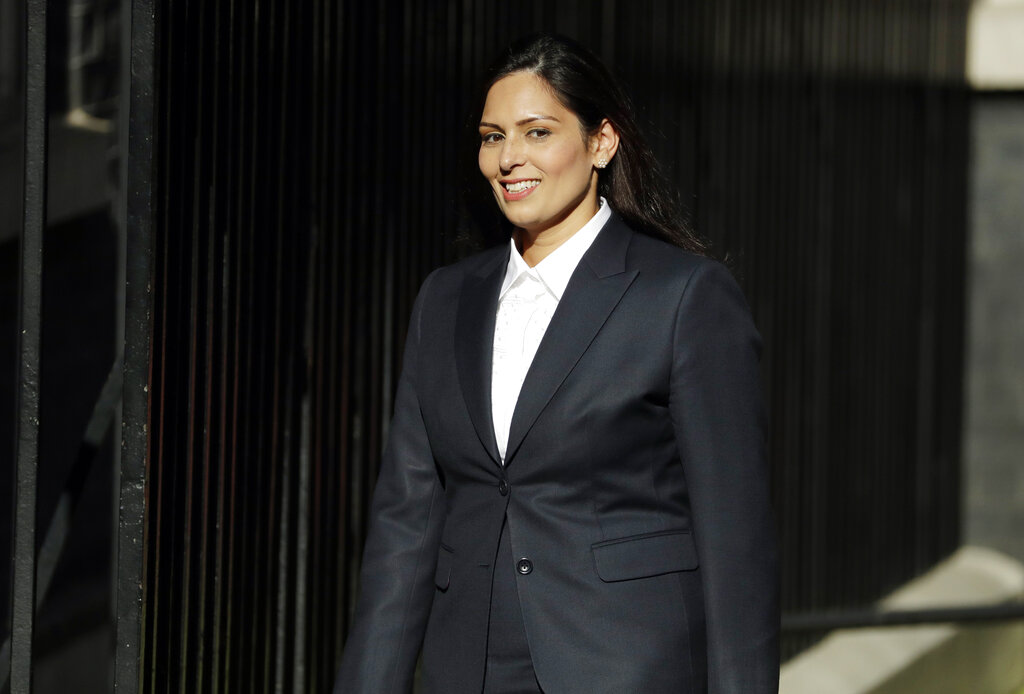 Sajid Javid, the son of a Pakistani bus driver, is the new chancellor of the exchequer.

Dominic Raab, the son of a Czech-born Jewish refugee who fled the Nazis in 1938, is the foreign secretary.

The “blood bath” on Boris Johnson’s first day as Prime Minister, which saw him wielding the knife on two heavyweight cabinet ministers, also hinted at his determination to represent “modern Britain”.

Priti, who was David Cameron’s “India diaspora champion” and built up close links with Narendra Modi and his government, now takes responsibility as home secretary (equivalent to the Union home minister in India), one of the toughest jobs in government.

Born in the UK to Indian parents who came from Uganda, Priti, 47, will be in charge of police, law and order, intelligence and tackling terrorism.

Priti’s appointment marks a political comeback. She had resigned as international development minister in November 2017 over undisclosed meetings with Israeli officials that breached diplomatic protocol.

Priti, who replaces Javid, said it was a “great honour” to be appointed home secretary, adding the role came with “significant responsibilities”.

She told Sky News: “I will do everything in my power to keep our country safe, our people secure, and also to fight the scourge of crime that we see on our streets. I look forward to the challenges that now lie ahead.”

Right in the middle of the Iran crisis, Johnson’s opponent in the Tory leadership contest, the foreign secretary Jeremy Hunt, has also returned to the backbenches after refusing what he considered a demotion to defence.

Hunt tweeted: “I would have been honoured to carry on my work at the FCO (Foreign and Commonwealth Office or the foreign ministry) but understand the need for a new PM to choose his team. BJ kindly offered me another role but after 9 yrs in Cabinet & over 300 cab mtgs now is the time to return 2 backbenches from where PM will have my full support.

“I’ve been a cabinet minister for every hour my 3 gorgeous children have been alive. So whilst it may seem strange for someone who just tried to become PM (& is a terrible cliche) I have decided now is the time for the biggest challenge of all — to be a GOOD DAD!”

A Tory MP said: “This is even more ruthless than Harold Macmillan's ‘night of the long knives’.”

This is a reference to the events of July 13, 1962, when Macmillan, then Prime Minister, sacked seven cabinet ministers.

This time the number is more than 15.

Boris made a stirring speech on the steps of 10 Downing Street, after taking over on Wednesday, promising the UK would leave the EU on October 31.

“We are going to fulfil the repeated promises of parliament to the people and come out of the EU on October 31, no ifs or buts,” he asserted, full of confidence as he was watched by his supporters, including his 31-year-old girlfriend, Carrie Symonds.

She did not accompany him to Buckingham Palace when Boris met the Queen as required by tradition, nor was she present at Tuesday’s count. Now referred to as the Prime Minister’s “partner”, she is expected to move into No. 10 with Boris, who is still technically married to Marina Wheeler.

These personal complications are the least of the new Prime Minister’s worries. The Tory majority in the Commons, even with the backing of 10 Democratic Unionist Party MPs, looks like coming down from 3 to 1.

There were a number of significant resignations from the cabinet on Tuesday, most notably that of Hammond as chancellor, who is now expected to oppose a no deal Brexit in the Commons.

Yet, Boris said he was certain he would be able to negotiate a new withdrawal agreement, which Brussels has said it will not reopen.

As he spoke on a gloriously sunny day in London with the temperature reaching 31 degrees Celsius — even the Queen had an air cooler in her drawing room — the sound of protesters wafted over Downing Street.

Perhaps this was symbolic but Boris’s convoy to Buckingham Palace was blocked by red-shirted climate change demonstrators before they were shoved out of the way by burly policemen.

“We will do a new deal, a better deal that will maximise the opportunities of Brexit while allowing us to develop a new and exciting partnership with the rest of Europe based on free trade and mutual support,” insisted Boris.

“I have every confidence that in 99 days’ time we will have cracked it.”